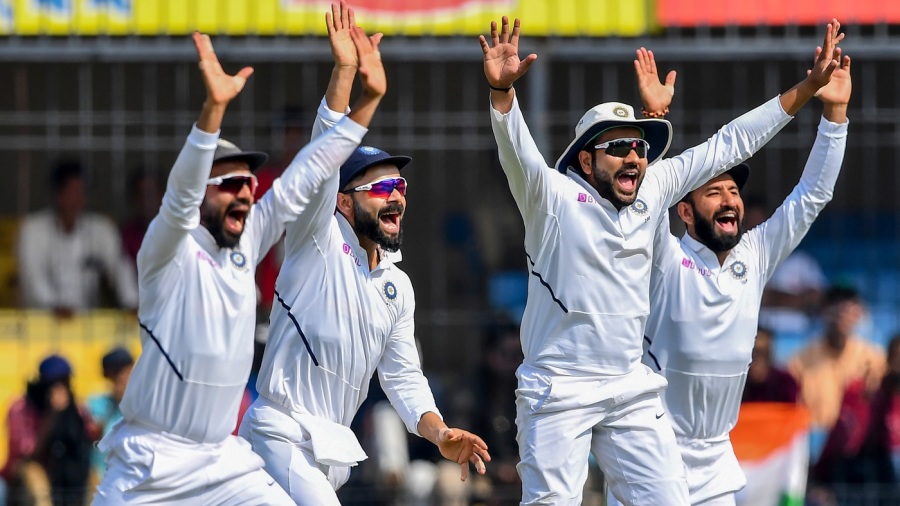 It is not unnatural for visiting batsmen in India to feel like they are trapped; to spend over after over under pressure with their edges being beaten and their shots counting for nothing. Just that most times a spinner would be bowling. Bangladesh went through a different experience in Indore.

For the first time in forever – okay, it’s actually only since 2001 – India felt compelled to keep their fast bowlers on for 23 overs straight with the new ball. And we’re talking about the third and fourth innings of a home Test here. That’s around the time a subcontinent pitch is worn beyond recognition and the ball doesn’t so much turn as create tiny rips in the universe. So what really is the point of being a seamer?

“#HoldMyBeer,” said Mohammed Shami, Umesh Yadav and Ishant Sharma as they ripped through the opposition to set up victory by an innings and 130 runs. India’s fast bowlers average 15.82 in 2019, easily the best in the world and on the third day of this Test, they showcased all the qualities that went into that stat.

Virat Kohli had declared with a lead of 343, a sizable cushion for an attack that is up there with the greatest that has ever played this game, and within the first 14 overs, they created so much excitement that the captain had burnt both reviews. Bangladesh should have tried to capitalise on that but they were sorely outmatched here.

Shadman Islam, for example, was worked over brilliantly. He spent most of his knock worried about the outswinger and with good reason. Ishant was laser-focused on angling the seam away from the left-hander, putting his entire body into his action to keep the slips in play. Then, all of a sudden, he bowled one with his fingers sliding down the right-hand side of the seam. He did that so the ball would hit the deck and wobble into the batsman – a trick James Anderson and Stuart Broad use regularly in England. Islam was just not ready for something like that. He lost his stumps and worse, looked up to see the bowler barely even celebrating. Human beings react to practically everything. A cup of coffee in the morning puts a smile on our face. Seeing Ishant utterly expressionless made it seem like he had seen that wicket coming from a mile away.

It was a poor match for Bangladesh’s openers overall. Imrul Kayes totalled 12 runs in two innings and considering he dropped Mayank Agarwal when he was on 32, his overall contribution to this game was 199 in negative.

The only visiting player who came out with a little credit was Mushfiqur Rahim. Having top-scored in the first innings as well, he made an important half-century, replete with his trademark shots, those full-blooded cuts behind point and effortless flicks through midwicket. That he could even play them though was because his defence was in good order and also because Rohit Sharma dropped him on 4. Mushfiqur showed that once the ball gets older run-scoring becomes easier. Bangladesh could have exploited that if they’d had a better start to their second innings. It should be their primary focus ahead of the day-night Test next week. One Indian batsman made more runs all by himself than they could in two full innings.