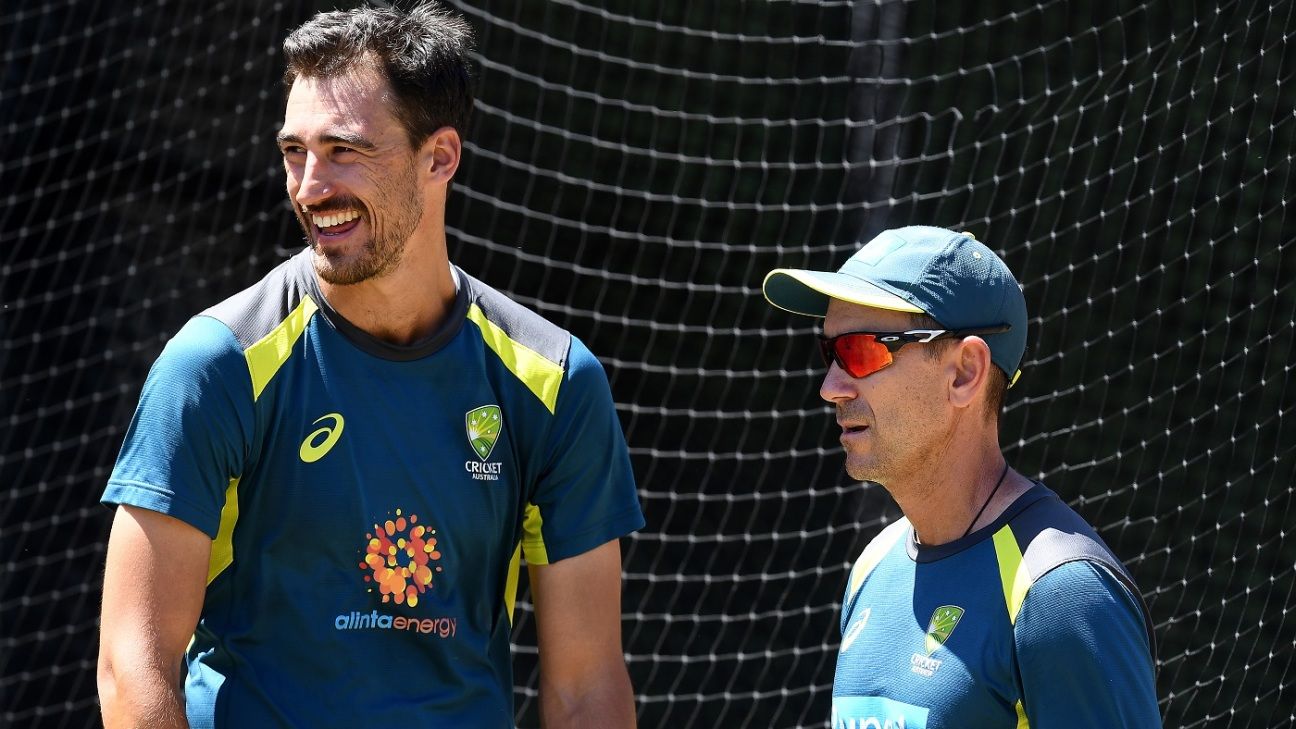 Among the 11 Australian cricketers hoping to make an advance booking on their spot in the Ashes touring party with a striking performance against Sri Lanka at Manuka Oval this week, no-one will be striving more fervently to place vivid memories in the mind of the coach Justin Langer than Mitchell Starc.

At the end of a Test season in which he has significantly underwhelmed, whether in unsympathetic UAE conditions or more helpful climes at home, Starc was subject to the closest of scrutiny from Langer and the selector-on-duty Greg Chappell at Australia’s major training session before the inaugural Canberra Test.

Each stood sternly behind the net where the left-armer and the possible allrounder debutant Marcus Stoinis bowled in tandem, trying to impress ahead of a match that will be as fascinating for individual storylines as for whether Australia can advance to a 2-0 series win against modest opposition.

The prospect of a flat Manuka surface, with the curator Brad Van Dam suggesting the home side’s top six will never get a better opportunity this summer to make a century, may not augur too well for Starc’s chances of a memorable match. But the Oval’s traditional capacity to produce an abrasive surface conducive to reverse swing will certainly aid his cause after five home Tests in which the old ball has more or less stayed gun-barrel straight.

While Starc’s voice has been conspicuous by his absence from numerous media calls this season, who better to talk him up two days out from the Test than Nathan Lyon, the finger spinner who has benefited from the footmarks generated by the spearhead’s hefty follow-through for much of the past eight years since both played their first Tests in 2011.

“I don’t understand all the criticism, to be honest,” Lyon said. “Mitch is one of my best mates and I back him to the hilt and back and as I have said in press conferences before, if you want to take my gear and go face him in the nets, go for it. He is bowling fast, he is moving it, he had the ball reversing in the nets. Mitch is a good fella and an X-Factor. He has 200 Test wickets so if anyone can get 200 Test wickets you must know what you are doing and you must be confident.

“So, I back Mitchell to come out and have a massive role for us in every game he comes out to play for Australia. I am looking forward to watching him this week and hopefully bowling really well with him in partnerships because that’s the biggest key: if we can bowl well in partnerships it doesn’t matter who it is, hopefully we will take 20 wickets and each and every player will enjoy each and everyone’s success as well. So, yeah, Mitch has got all of my support and everyone’s support in that change room so it is pretty unfair criticism in my eyes.”

“We’re very satisfied with the preparation we’re getting. The training session I’ve just come from is one of the best I’ve had all year.”

Nathan Lyon on Australia’s practice session ahead of Canberra Test

Criticism or not, the questions of what Australia will require in England later this year – and what they lacked until far too late in the 2015 Ashes series – cannot be overlooked. Though Starc led Australia’s wicket-takers in the series with 18, many of these were taken at times after a match was decided, and his economy rate of 3.85 did not help the then captain Michael Clarke to exert any scoring pressure on the home side’s batsmen.

It was not until the final Test of the series at the Oval, after the Ashes had returned to English hands via the Australian batsmen’s slaughterhouse of Trent Bridge, where the belated inclusion of Peter Siddle added economy and balance to the attack. Starc went wicketless in that match, while Siddle scooped overall figures of 6 for 67 to leave many asking why he had not been trusted to control the Dukes ball earlier on.

Four years later and Siddle remains a part of Australia’s squad, arriving to train at Manuka straight from Canberra airport the morning after he played a Big Bash League match for Adelaide Strikers in Sydney. It appears likely that Siddle will continue to be in reserve this week, but it is equally clear that he is being kept in mind for the Ashes, leaving Starc and Jhye Richardson among the incumbents needing to leave an impression on Langer in particular. Lyon, of course, was not getting ahead of himself, but it will be difficult for minds not to wander towards the urn and the place of Starc in Australia’s planning to keep it.

“Coming down to Canberra, playing the first-ever Test match here and coming off a great win, I think it’s important that we keep the momentum rolling so we can keep looking forward,” Lyon said. “There’s a lot of water to cross under the bridge before we even start thinking about the Ashes. There’s white-ball cricket around the corner but also Shield cricket. It’s not our last game before the Ashes, we’re going to have great prep leading up to the Ashes but I’m not even considering that at the moment.”

“Our preparation for every Test this summer has been outstanding, India outplayed us, but we knew coming up to Brisbane if we had our solid preparation, ticked all the boxes we can control then hopefully we will get the result, and we were fortunate enough that we had Pat Cummins in our side and he played an exceptional role up there. We’re very satisfied with the preparation we’re getting. The training session I’ve just come from is one of the best I’ve had all year.”