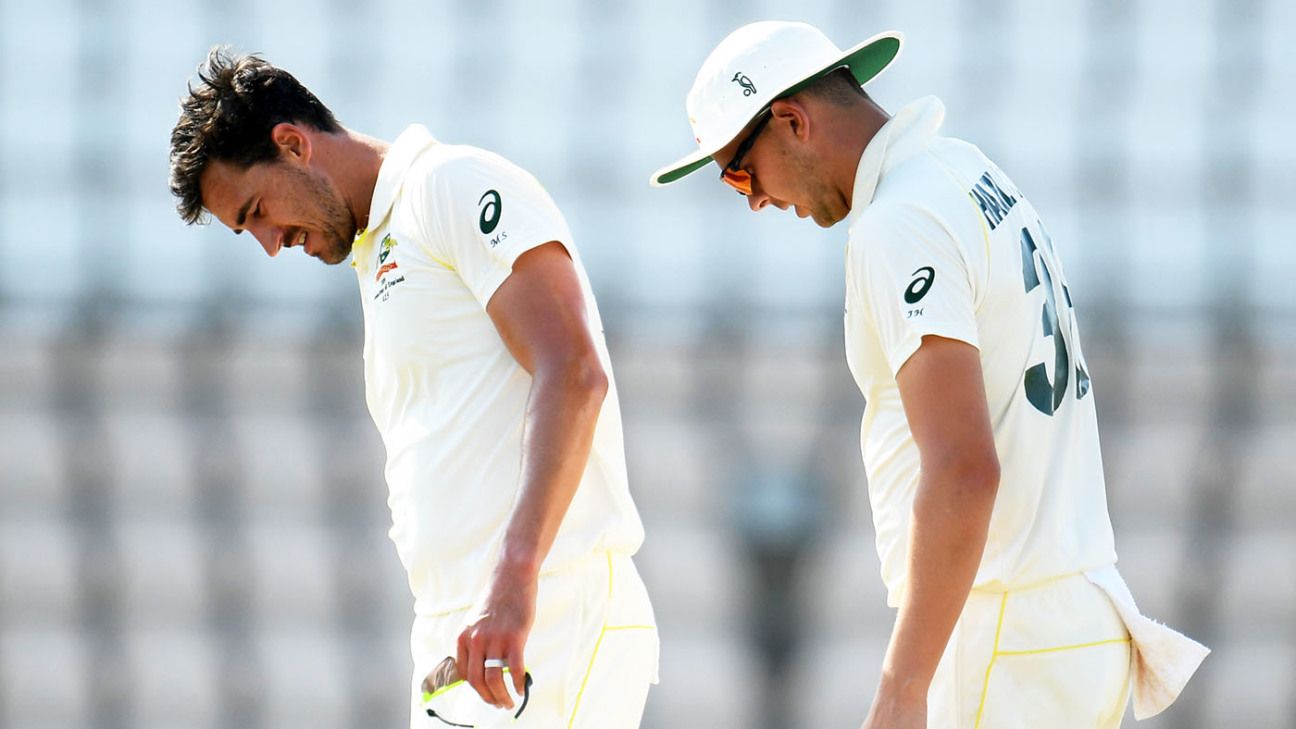 Mitchell Starc may be in line to miss the opening Ashes Test in Birmingham in order to ensure he has found the ideal red-ball rhythm that was far more evident in the bowling of James Pattinson, Peter Siddle, Pat Cummins and Josh Hazlewood on a Southampton pitch the captain Tim Paine labelled “bordering on dangerous”.

As the Australian squad prepared to be cut back from 25 to a likely 17 on Friday, Paine revealed he had made his last contribution to the selection debate on Thursday morning before the Australians’ internal trial and warmup game concluded well inside three days. He also spoke glowingly of the toughness of Cameron Bancroft, who ground out the highest score of the match and faced down the best that Cummins, Hazlewood and Starc could hurl at him.

But in assessing the pacemen, Paine was frank in his statement that Starc remains in transition mode from his World Cup exertions. He was far more enthusiastic in his praise of Pattinson and Siddle in particular, lauding their accuracy in probing on a surface that offer assistance both lateral and vertical, while also indicating Hazlewood was tracking as desired.

“Josh, who I have been with for the last five or six weeks, he hasn’t played cricket since the Indian series last year but what we have seen with him is he is tracking in the right direction, every time he has bowled in a match he has got better and better,” Paine said. “We’re thrilled with that and obviously he is going to be a key bowler for us at stages during this Ashes series. He is getting better and better every time.

“We know what Starcy can do when he is on fire and on song like we saw in some of the World Cup games, he can get any batter out in the world. He’s coming off a lot of white-ball cricket, so Starcy takes a little it of time to adjust back up with his lengths and stuff, but he’ll be working hard next week again, and when he’s song he will be playing a huge role in these Ashes.

Adjustment was also crucial to the way Bancroft, David Warner and Marnus Labuschagne made runs in often fiendish circumstances. Bancroft was happy to wear blows to the body, while leaning on his cover drives with a carefully angled bat that reduced the chance of outside edges while the runs ticked over steadily.

“I thought Bangers played unbelievably well. To get basically a hundred on that wicket was an unbelievable effort,” Paine said. “I thought what it showed is Bangers’ toughness. The reason the guys were getting stuck on the crease a lot is because the odd ball was jumping up at them.

“That can play on a guy’s mind, and mix with a batsmen’s feet, particularly when they are bowling the speeds guys were. But that just shows the mental application and toughness that Bangers has got, to keep going forward, to keep wearing balls on the body. The boys think he has a bit of a screw loose but he seems to enjoy getting hit on the body, it seems to make him bat better. He was superb in that second innings.”

Alongside Bancroft, Smith and Warner have eased into their Test series preparations for the first time with quiet resolve a little more than a year on from the Newlands scandal. Paine, eager to stress the issue as closed, focused on how much English knowhow the trio possess.

“That’s all in the past. I think everyone is rapt to have them back, that’s the emotion, everyone is excited to have two of our loved teammates back in, and Bangers, three,” Paine said. “Having all three adds not only to our team but knowledge of English conditions. Bangers has played a lot of cricket over here now and the other two are two of the best players in the world. We are thrilled from a cricket aspect, we are thrilled from a team aspect to have those guys back in around our group.”

“I’ll speak to all the guys who are going home, and you obviously feel for them because they’ve got so close to every Australian cricketer’s dream”

The batting forebearance shown by Bancroft in particular will have to be mirrored by the eight players informed they will not be going on the remainder of the Ashes tour. Labuschagne, Bancroft and Alex Carey have county deals to keep them on hand should they miss the cut, while others will be charting European holidays in the midst of a British hot spell that nudged 38C in London on Thursday.

“I’ve already spoken to them [the selectors] this morning, so I’ve given my thoughts. Obviously we’ve been in constant communication for some time and bouncing squads and teams off each other the whole time. I sort of had my final say this morning and they’ll make the rest of the decisions from there. On the phone, this morning we had a hook up. I passed on what I think is the best mix to win the Ashes in England.

“I’m not totally a part of the final decision. So obviously I’ll speak to all the guys who are going home, and you obviously feel for them because they’ve got so close to every Australian cricketer’s dream. To have it taken away a week before the first Test is going to sting but we’ve got a really close group of 25 cricketers here and I’d imagine every one of our squad will be speaking to those guys in the next 24 hours.”

The team’s balance remains in some doubt, with the preponderance of Tests and tour matches over little more than six weeks leaving open the possibility of a sixth fast bowler being part of the group. Balance between the batsmen and the need for an allrounder are also key debates.