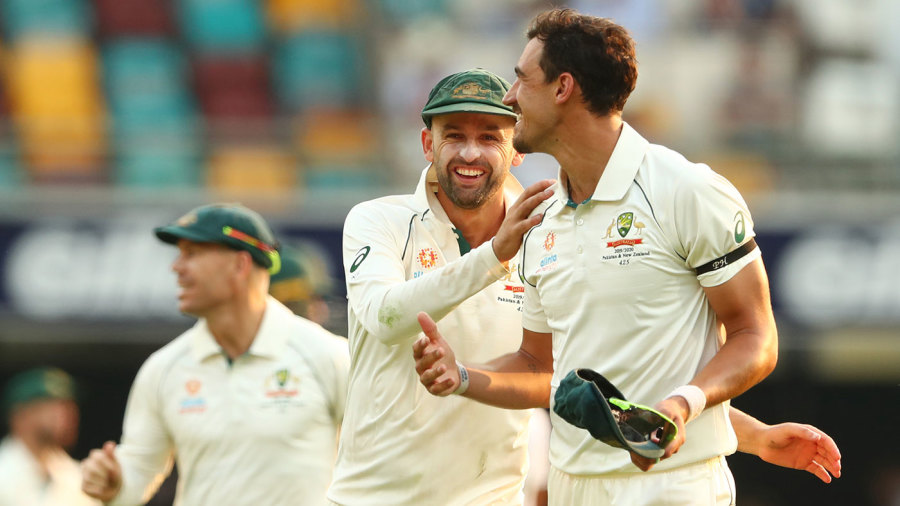 Australia finished the opening day of their Test summer in a strong position on one of their happiest hunting grounds, although for periods either side of a five-wicket surge in the afternoon they were made to work hard by Pakistan.

Whether Pakistan’s 240 – boosted by Asad Shafiq‘s 76 – will be enough to keep them in the contest remains to be seen and rests with their bowling attack. At nine for 75, they would have hoped for much better; at 5 for 94, they probably feared much worse, before Yasir Shah helped Shafiq add 84 for the seventh wicket. For Australia, the feelings might have been reversed.

Mitchell Starc, on his return to the Test side, finished with 4 for 52 – cleaning up the tail as he can do so well – and was on a hat-trick late in the day when 16-year-old debutant Naseem Shah faced up to the first delivery of his career and somehow squeezed the ball to the leg side.

After not quite getting their lengths right in the opening session, Australia’s three quicks were excellent after the interval as Pakistan’s impressive morning’s work unravelled. That was compounded by the controversial dismissal of Mohammad Rizwan, who edged behind off Pat Cummins only for replays to suggest Cummins had no part of his foot behind the line, but third umpire Michael Gough gave him the benefit of some very slim doubt.

That left Pakistan 6 for 143 and still in danger of folding for under 200. However, Shafiq, who scored 137 at the ground on his previous visit, continued his excellent form from the warm-up matches where he made hundreds against Australia A and a Cricket Australia XI. He was eventually cleaned up by a beauty from Cummins with the new ball during Australia’s strong finish as they claimed 4 for 13 to end the innings.

Captain Azhar Ali had won the toss and despite a green tinge to the surface, was not lulled into bowling. He and Shan Masood then played superbly during the opening session, happy to give the two hours to the bowlers unless there was a loose delivery to attack in a session that brought just five boundaries. The pair left well, helped by the back-of-a-length approach from the quicks, and a lunch score of none for 57 – by the standards of visiting teams at the Gabba – was a fine start. To show how tough a place it is for visiting sides, their final partnership of 75 was the highest for a visiting team in the first innings of a Test at the ground.

Then, however, things started to change. In the sixth over after the break, Cummins, bowling around the wicket, squared up Masood to take his outside edge. Three balls later, Hazlewood drew a nick from Azhar which carried low to first slip where Joe Burns held on. All of a sudden, two new batsmen were at the crease. One of them was Haris Sohail, who struggled in the warm-up matches, and he did not last long when he flashed at Starc.

The fear that Pakistan were about to completely lose their way increased when Babar Azam played a horridly wild drive at Hazlewood to provide another slip catch. After such a build-up for Azam – including runs in the T20Is and the Australia A match – it was a hugely deflating shot.

Nathan Lyon then returned to the attack for his second spell and struck first ball when a hard-handed Iftikhar Ahmed inside-edged to short leg and it had the feel of a full-blown collapse that could decide the Test by tea on the opening day.

That did not transpire, thanks to a mixture of punchy and pugnacious batting. Rizwan, playing just his second Test, counterpunched strongly either side of tea to score at better than a run-a-ball before the nick off Cummins prompted significant amount of slow-mo replays of the front foot. When it comes to calling no-balls on replays, the benefit of any doubt goes to the bowler. Cummins, though, may still have got lucky.

There was no great expectation that Shafiq would now have much support, but Yasir proved otherwise in a stand that spanned 26 overs. The pair took advantage of a period where Tim Paine sat back a touch, using Lyon and Marnus Labuschagne ahead of the second new ball – Australia’s over rate was poor for much of the day, which can now lead to points deductions in the Test Championship.

Shafiq’s fifty came from 99 balls and when the pair made it to the 80-over mark there was a chance that if they survived to the close Pakistan could yet eye 300. However, those hopes were dashed in the amount of time it took Starc to get loose as he speared a yorker through Yasir then found Shaheen Afridi’s edge first ball, although it needed a review which Paine, perhaps still haunted by his DRS errors in the Ashes, was reluctant to take.

When Shafiq’s fine innings was ended by Cummins, it looked as though Australia would bat before the close, but Naseem – who generated one of the biggest cheers of the day when he on-drove Starc for his first boundary – and Imran Khan took the innings deep enough that when Naseem lobbed a short delivery in the air, Australia’s openers would not have to contemplate batting until the morning.