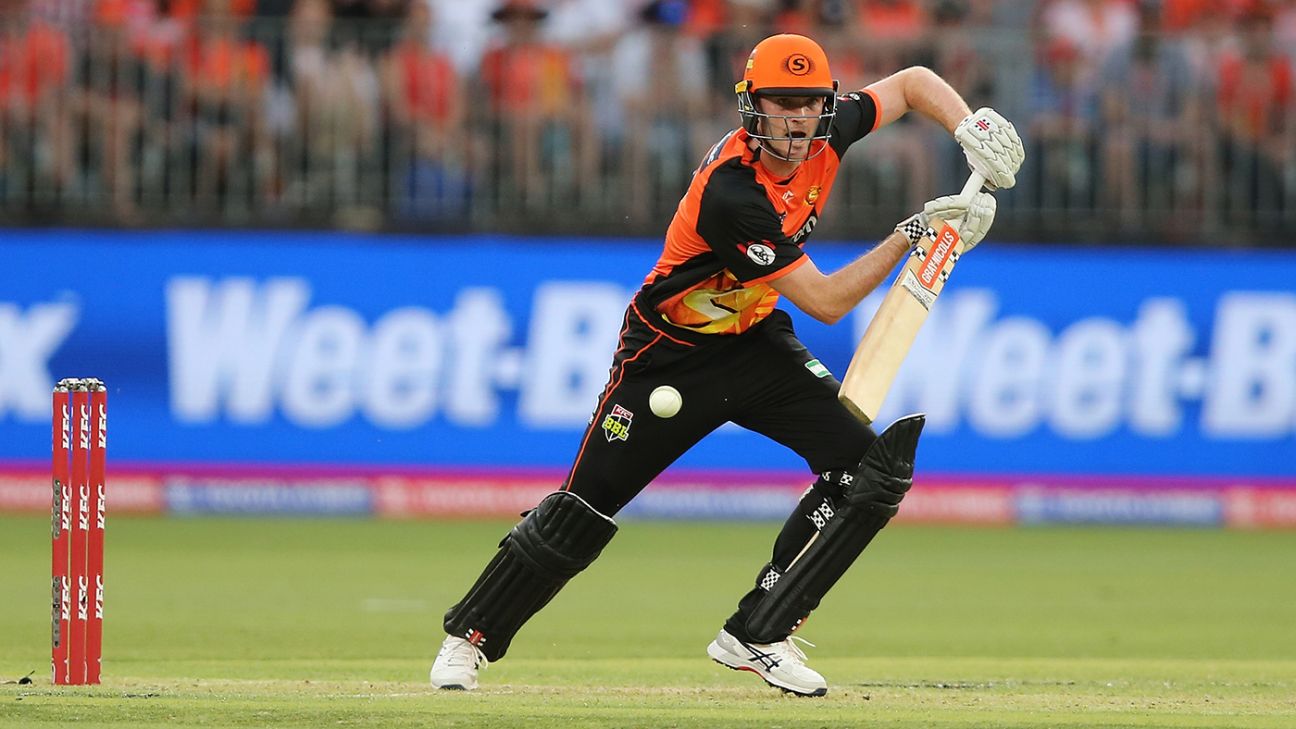 Mitchell Marsh has been ruled out of Australia’s first ODI against India at the SCG after spending two days in hospital with the stomach illness gastritis. Ashton Turner, the Western Australia and Perth Scorchers batsman, has been called up as cover after showing impressive form in the Big Bash League with Australia coach Justin Langer lauding his running between the wickets and finishing skills.

“I remember when Mike Hussey came into Australian cricket, what almost got him a shot in the one-day team was his running between the wickets,” Langer said. “That might sound like the dumbest thing you’ve ever heard but his [Turner’s] running between the wickets is unbelievable, he’s such a great athlete and one of the hallmarks of great Australian teams – think of Dean Jones, Michael Bevan, Michael Hussey – is the running, it’s a basic but he does that.

“We’ve also talked about getting players who can finish off innings and he’s shown that particularly in what we can go off in the Big Bash. He’s in great form. He’s an elite athlete in the field and he’s also a captain. You see the way he finishes innings that he’s a good thinker and a really good leader.”

For Mitchell Marsh, who was left walking gentle laps of the SCG on Thursday, it is another blow after he was dropped from the Test squad for the Sri Lanka series. His brother Shaun was also left out, raising the prospect of it being the end of his Test career, with Langer admitting they were tough decisions involving a family he is very close to, but calls that had to be made.

“Of course these decisions are tough but that’s what leadership is about,” he said. “You’ve got to make tough calls. I’ve known them since they were kids, Geoff Marsh is one of my best friends and he’s also been a coach with me in WA. At the end of the day we all know, the boys know and Swampy [Geoff Marsh] knows, that this a tough business and if you aren’t performing you don’t get selected.”

Mitchell Marsh will be assessed later in the series to see if he can take any part in the subsequent matches in Adelaide and Melbourne, but in the short term his absence could impact the balance of the side Australia field. Adam Zampa and Nathan Lyon have both been included in the squad but without Marsh’s medium-pace it may now be tricky to fit both into the XI.

Australia are keen to try and get two frontline spinners into their ODI team – a formula that has worked well for other teams – as they attempt to arrest the slump that has left them ranked sixth as they prepare for defend their World Cup title in England. It could be that the twin-spin attack now has to wait for the series against India and Pakistan that begin next month.

“There might be opportunities for them to play together,” Langer said. “It perhaps changes it a bit with Mitch Marsh; we could have had maybe the two medium-pace options as the extra quick. That might change a bit now. A lot of the teams around the world are doing it [playing two spinners]. There’s no doubt India will do it against us. It’s something we’ll have a look at. It would be good to have a legspinner and an offspinner – Glenn Maxwell bowls offspin as well. We’ll have some good combinations there.”

As well as searching for the ideal balance of attack, Australia are also trying to formulate a top order that can set and chase imposing totals above 300. David Warner and Steven Smith are inked in to return for the World Cup, but Australia’s problems in ODIs started when they were still available. In the current squad Usman Khawaja and Peter Handscomb have a chance to stake their claim after a shift from the selectors to go for more traditional batsmen in place of hitters such as D’Arcy Short and Chris Lynn.

“We have to look for scores at 300 or 350,” Langer said. “We have to do that to compete and in England, we have to do that. We’ve got the talent and now we’ve got to get the experience and the composure and ability to do it under pressure and to do it consistently. These are what we’re all aspiring to and that is one of the great lessons in the game.”