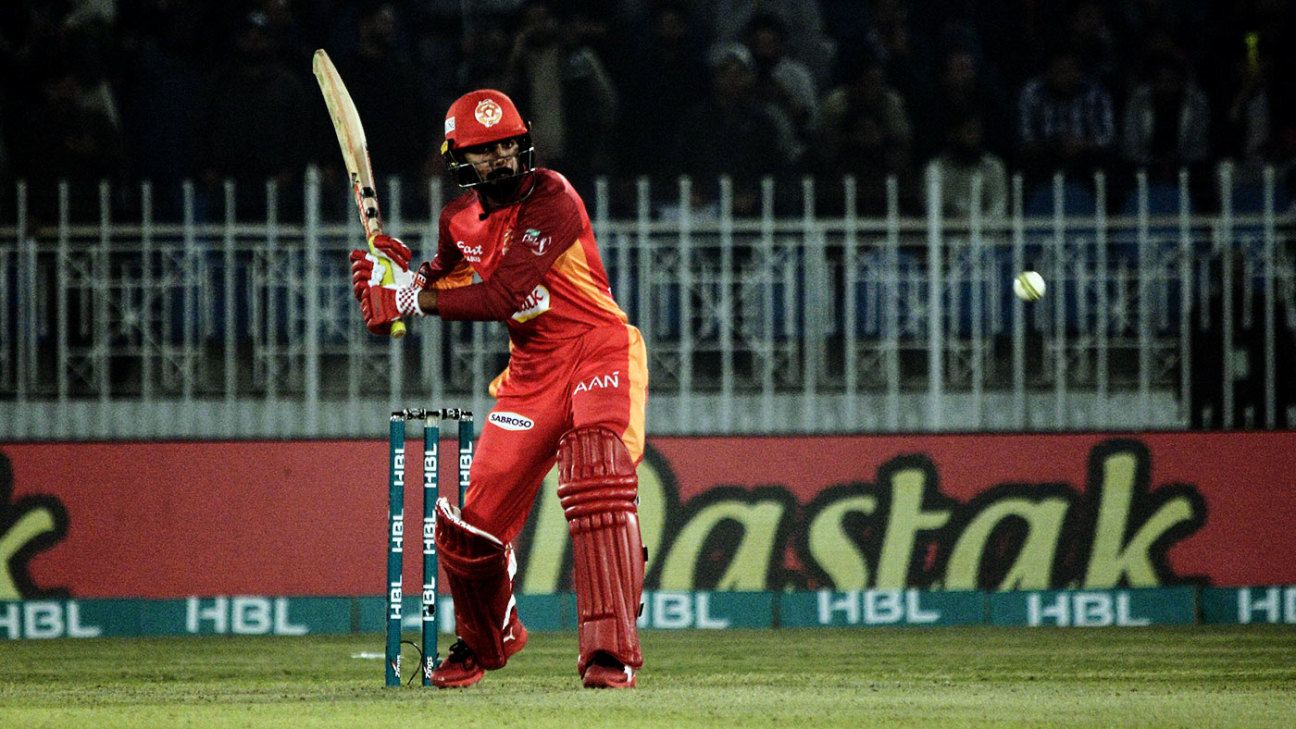 In addition to legspin, his primary skill, Shadab was in excellent form for Islamabad United in the Pakistan Super League, scoring three-half-centuries in his 263 runs at a strike rate of 159.

“Shadab as an allrounder was a plus for us, especially in white ball cricket,” Misbah told ESPNcricinfo from Lahore. “I think we need a floater in the middle somewhere to join a link between the top order and late middle order.

“His bowling obviously needs improvement and consistency, but he still had couple of good games with the ball. There were some differences in pitches in Pakistan and he played most of our games in Pindi [Rawalpindi], where boundaries are short and the ball doesn’t turn much, so it is difficult for a spinner.

“Against Karachi (Kings) and Lahore (Qalandars), Shadab was good. But overall, wristspinners in T20 cricket with the ability to bat at any number is a leverage. He can field, bowl, bat and can be used anywhere according the situation of the game.”

“In terms of my team performance (Islamabad were languishing at the bottom after 10 games), they didn’t perform as per expectation, but it is part of the game. It does happen and there is a disappointing factor for me but overall it was a good experience.”

While the results weren’t encouraging, Islamabad played out a few close games that they could’ve pulled off at other times with better smarts. They lost to Quetta Gladiators in the final over while defending 188, had a game washed out against Peshawar Zalmi and then lost agains to Zalmi on DLS method. Then they nearly defended 137 against Karachi.

“As far as results go, there were very close margins,” Misbah pointed out. “One game here and there, you are top and losing one crucial game can throw you down at the bottom. Had we won our last game against Karachi we could have finished second. We also had a few rain-affected games. Other than one team, until the last moment, no team was sure about their position of qualification and there was a great sense of competition.”

Team disappointments aside, Misbah was excited by the overall talent pool and the quality of cricket on show. “It showed that Pakistan T20 cricket is going up, the quality is going top notch and have improved from the years which is good for the country and T20 cricket in the country.”

In addition to his dual responsibilities for Pakistan, and being head coach of Islamabad, the franchise he captained until his retirement in 2019, Misbah has also had a ringside view of emerging talent from other corners, by simply being engaged in the league.

“It is always good to be involved directly in the circuit,” he said. You get to work with them. Obviously I was with Islamabad, but then there is a bigger pool out there you playing against. Those players who are playing for Pakistan or will be playing in future so it was good learning curve for me.

“There were a lot of players like Haider Ali, who performed very well and he is coming through a proper way – played under-19 and then first-class cricket, scored runs with the ‘A’ team and then proved his worth in T20 cricket as well.

Otherwise, before this stint it appeared as if he wasn’t a T20 player. He’s proved everyone wrong and is an outstanding future prospect. Akif Javed, who hasn’t played much, came in the emerging category and the way he bowled in pressure situations was great.

“Azam Khan showed a glimpse that he can be a better player in the future if he works on his fitness. Khushdil Shah was superb. We are thinking about Nos. 5 and 6 (for Pakistan). We need a finisher and Khushdil’s performance in PSL reached a certain level, and he is seriously under consideration. It is a good sign that we have players who are proving the worth and we have readymade players at bench.

Then I saw Umer Khan, the left-arm spinner making waves again for the second season. He is again a good future project. Fakhar Zaman, at the later part of the tournament regained his form, Sharjeel Khan was good in patches but he needs to work very hard on his fitness and to play for Pakistan you need to be on the top of your fitness.

“Seniors like Shoaib Malik also played good innings. Shaheen Shah Afridi was great not only with new ball but in death bowling as well and [is] improving day by day; and with [Mohammad] Amir’s bowling, there were a lot of positives for me to work around a pool of players to make a team. There are future prospects but it’s a matter of time when they are to be lifted and taken with us.”