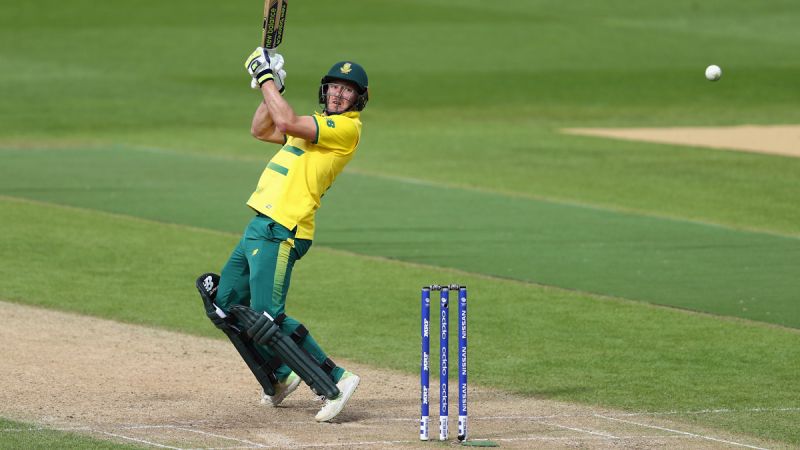 Pakistan came into this series with an intimidating, record-breaking T20 pedigree – 11 consecutive successful chases, 11 series wins on the bounce. But that wasn’t enough to overcome South Africa’s dashing at the top of the order and dogged commitment (and variations) with the ball in the first match at Newlands.

Indeed, with a bowling attack that included a left-arm quick in Beuran Hendricks, a left-arm wristspinner in Tabraiz Shamsi, and a wrong-footed right-arm quick in Junior Dala, as well as Chris Morris’ pace and bounce and Andile Phehlukwayo’s mixed bag of variations, the hosts out-Pakistan’d Pakistan in terms of depth, variation and wicket-taking ability with the ball.

South Africa might not even be entirely sure what their best XI in white-ball cricket looks like; a new captain will lead the one on Sunday – David Miller after Faf du Plessis earned himself some rest. And all the chopping and changing is arguably pushing them further from, rather than closer to clarity. But they have shown that even with a revolving door in selection they have the personnel and the nous to overcome the world’s best T20 side.

With wicketkeeper Quinton de Kock also missing with injury, Pakistan will sense an excellent opportunity to level the series in Johannesburg, which was also the setting for a dominant eight-wicket win in the ODI leg of this tour. They will also probably keep a close eye on Miller’s position in the field – his four catches and two run-outs, as well as being a South African record, were the key difference between the two teams in the first T20I.

Pakistan are a dangerous team when backed into a corner, and particularly so in a format they feel their most comfortable. Add the likelihood that they will find conditions that suit them at the Wanderers, and they are probably favourites going into the second game even if the series scoreline is currently in South Africa’s favour.

Reeza Hendricks‘ promise was not in doubt after he cracked a hundred on his ODI debut against Sri Lanka in August last year, but it’s only recently that he has started to achieve similar results with improved consistency. That was especially apparent in the Mzansi Super League, when he scored four consecutive fifty-plus scores, including back-to-back hundreds – one of them at the Wanderers. Without du Plessis, Hendricks will also be South Africa’s most experienced player in the top three.

A little more consistency would not go amiss for Fakhar Zaman too, who has managed just one fifty so far on this tour. His opening partner Babar Azam has enjoyed some success in South Africa, falling for single-figures just twice in 13 innings across formats on this tour, but while Babar can be counted upon to contribute, it’s an explosive start Pakistan will want and that’s where Fakhar’s capabilities will be needed.

Miller will get his first experience of leading a team in international cricket while Gihahn Cloete or Heinrich Klaasen will move in behind the stumps. Du Plessis suggested that every player in the squad would be trialled during these games, so Lutho Sipamla is once again in line for an international debut.

Mohammad Hafeez should be fit to slot back into Pakistan’s top order, and given that the visitors may well need Faheem Ashraf’s contributions with the ball at the Wanderers, Hussain Talat could be the player to make way.

Limited-overs pitches in Johannesburg are usually quick and encouraging for both pace bowling and strokeplay, but during the fourth ODI a track that was slightly drier than expected played to Pakistan’s strengths. Unless the pitch for the T20 is of a similar quality, the ball should fly off the bat in highveld conditions. Both teams will be wary of the propensity for afternoon thunderstorms in the region at this time of year.

“It’s very nice playing in South Africa. I had no idea before coming to Mzansi Super League that there are so many Pakistani people here. When you play for your country and you have support from Pakistani people, it’s like you’re playing in your home.”
Asif Ali was very impressed with the amount support Pakistan had at Newlands, and is hoping for more of the same in Johannesburg

“What I’m really liking about Reeza at the moment is that he’s improved his consistency. We always knew that Reeza had a bit of flair and is one of those guys who is beautiful to watch when he cover drives, or back foot drives, but it was a bit more about consistency.”
Faf du Plessis reckons Reeza Hendricks has improved greatly from being a once-in-five innings performer