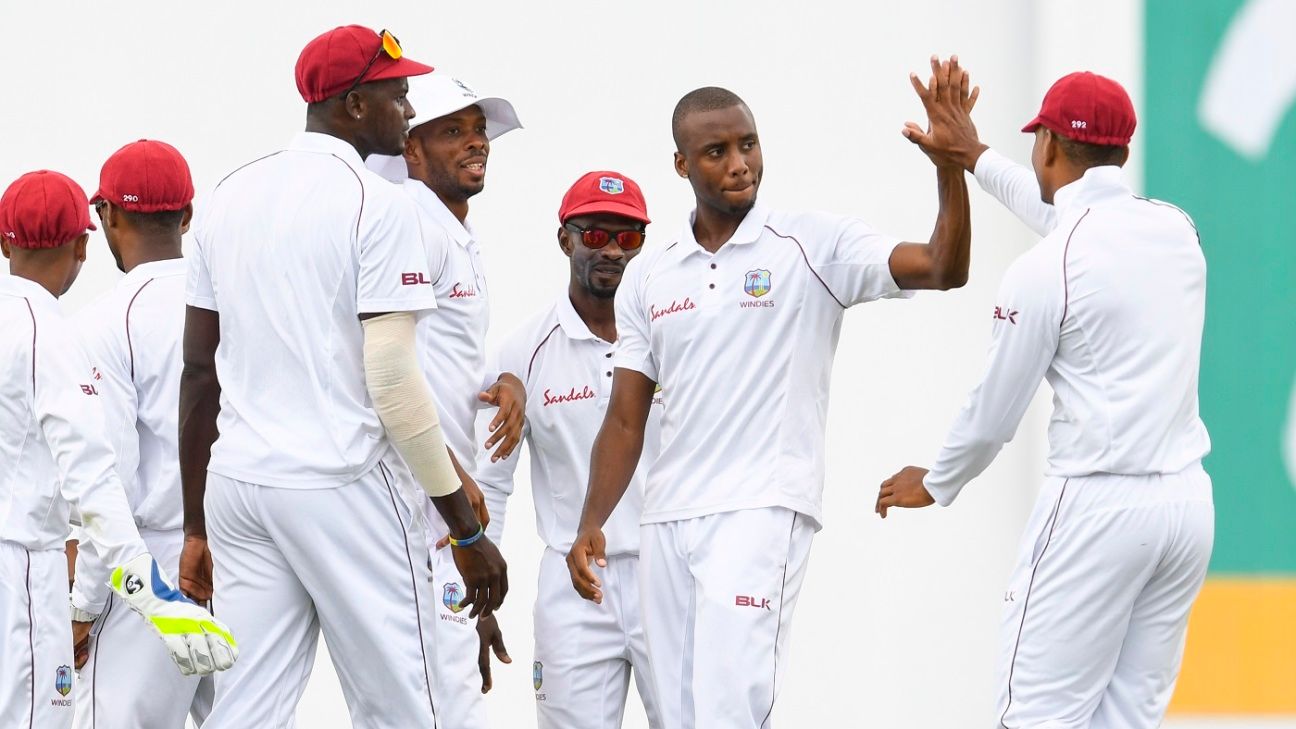 West Indian fast bowler Miguel Cummins has signed a three-year Kolpak deal with Middlesex, ruling him out of contention for his country. Cummins has played 14 Tests and 11 ODIs, with his most recent West Indies appearance coming in the Antigua Test against India in August.

The 29-year-old had a brief spell as an overseas player with Middlesex last month, taking eight wickets in three Championship games. He is the latest West Indian to take the Kolpak route into county cricket, following the likes of Fidel Edwards, who plays for Hampshire, and Ravi Rampaul at Derbyshire.

Cummins previously played under Middlesex’s coach, Stuart Law, when he was in charge of West Indies between 2017 and 2018. Middlesex, who were champions in 2016, finished eighth in Division Two in Law’s first season in charge.

“Stuart Law recommended that we get Miguel over, to have a look at him, on the back of the time he had spent with him whilst coaching the West Indies,” Middlesex’s director of cricket, Angus Fraser, said. “I had watched Miguel on video, but it is often only when you see someone play live that you get a true reflection of their capabilities. I was immediately impressed by Miguel.

“He has control, is able to move the ball away from a right-handed batsman and, I believe, the ability to bowl fast, aggressive spells when conditions dictate. During the recent spell he spent with Middlesex he fit in really well and will be a popular member of our squad.”

Middlesex will be looking for a new captain next season, after Dawid Malan announced that he was stepping down after two years in the role. Malan scored more than 1000 runs in the Championship, as well as leading Middlesex to the knockout stages in both limited-overs competitions, but saw the team fall well short of a successful promotion bid.

“Dawid has thrown his heart and soul into the role of club captain for the past two years, and on behalf of Middlesex Cricket, I would like to thank him for that,” Fraser said. “He has also shown great pride and dignity in the way he has handled a difficult season and he leaves the role knowing he has given it all he can.

“As a batsman the captaincy seems to have got the best out of him and he has had an excellent season. He has been our best player in testing batting conditions.

“That things have not worked out as we hoped is disappointing for everyone involved and we must take the responsibility for that. Personally, I would like to thank Dawid for his commitment to the role and his desire to take the club forward. We must now turn our attention to finding a suitable replacement to take this great club forward.”