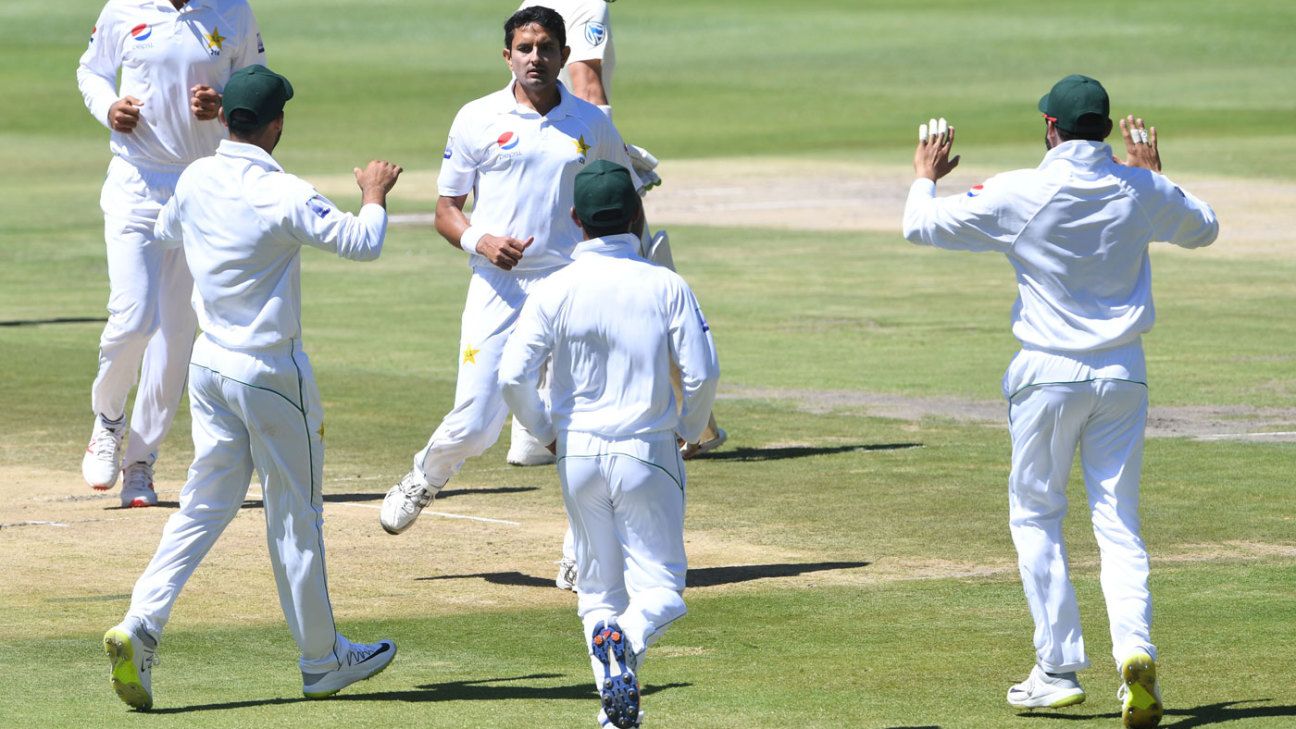 An “extremely disappointed” Mickey Arthur admitted Pakistan weren’t quite replicating their T20 success at Test level, but was satisfied the team was moving in the right direction. On a day where Pakistan were bowled out for 273, sealing a 107-run win for South Africa as well as a clean sweep, the Pakistan coach reiterated he had a long-term plan that he was confident of bringing to fruition.

“We’ll go back and assess exactly where we want to be,” he said. “We start our next Test series in September, and everybody goes into white-ball mode now. We’re certainly a far better white-ball team at the minute than we are a Test unit but we’ll get there. We’ve realised the brand we want to play. We’ve had a look at personnel, at who’s going to fit in going forward. So I’m pretty clear on the way to go, and certainly come September, when the Test championship starts, we’ve certainly got a team that can play in all conditions, and we need to identify what those skill sets are.”

It was Pakistan’s batting failures in the first innings of each Test that set them on the back foot. In all three Tests, Pakistan scored between 177 and 185 in their first innings, opening up opportunities for South Africa to build sizeable leads and shut the door on Pakistan. Arthur acknowledged the frailties in the batting order had made things difficult, but paid rich tribute to an “outstanding” South African bowling attack.

“We had our moments and we didn’t take them. That’s disappointing, but saying that, South Africa were outstanding. Particularly their bowling. The bowling just kept coming and coming at us, and the one thing that was always going to be tested was our young batting group. A couple have come through nicely and a couple maybe not, but that was always going to be tested. As I said optimistically, if we were getting 270s and 280s, we were certainly in the game. With a 180s in all of our first innings, we weren’t in the game, unfortunately.

“I thought Babar Azam was outstanding. I think he’s taken his cricket to another level. The question marks that were always around Babar will certainly disappear now. I thought the way he’d played this series was amazing and he’ll just go from strength to strength now. I thought Shan Masood played exceptionally well at the top of the order and at three. Asad Shafiq played two innings that were significant and everybody else chipped in along the way. We didn’t get enough runs clearly, but saying that, the 430 at Newlands was probably just too many from a very good bowling unit. We’ve got some work to do particularly in these conditions.”

Masood’s performances were a rare beam of light for a Pakistan side that initially planned to line up this series without him. It was only after a knee injury to Haris Sohail on the morning of the opening Test that Masood came into the fray. The left-hander scored 228 in six innings – three at No. 3 and as many as an opener – and was Pakistan’s highest scorer in the series.

But it was another selection quandary that occupied much of Pakistan’s attention. For the first two Tests, Shadab Khan’s unavailability meant Faheem Ashraf was the only viable inclusion if Pakistan were to play five bowlers But Arthur’s belief he wasn’t yet a genuine allrounder meant Pakistan played four specialist bowlers in Centurion and Cape Town. Arthur said the five-bowler strategy had worked well at the Wanderers, and was the better long-term option.

“I’ve been a massive advocate for the five bowlers, but the key is having the allrounder at seven. Shadab was unfit for the first Test, he was physically fit for the second but probably short of cricket. So it would have been hard to just dump him in there. I think he showed in this Test match it gives us a real good flexibility. And we’ve got to play to our strength. That’s the aggressive way to go, and certainly five bowlers is our strength.”

Arthur was particularly praised his side for their attitude and work ethic, despite the scoreline. The tour appeared to have started most ominously, with rumours of Arthur giving some of his batsmen a stern dressing-down on just the second day of the series. On that occasion, Pakistan had squandered a position where they were arguably on top, going from 100 for 1 in the second innings to being all out for 190. However, it was clear today the Pakistan coach didn’t have any issues in terms of his side’s temperament, and the disappointment he felt had far more to do with the results.

“We’ve got some pretty high standards in the Pakistan cricket team and clearly we hate losing so 3-0 doesn’t sit well. It certainly doesn’t sit well with me, and it doesn’t sit well with the dressing room. I can’t however, fault attitude, and I can’t ever fault work ethic. The boys have worked incredibly hard on all their skills, they have been fantastic. They’ve tried as hard as can be throughout this Test series, so from that sense, I’m proud of them. The other sense, we have standards, we can never accept losing a Test series.”

It isn’t until September that Pakistan next play a Test, which may help take some heat off the players who struggled in South Africa. Pakistan now go into, as Mickey Arthur put it, “white-ball mode”, with ODIs against South Africa, Australia and England to come before the World Cup, meaning the woes of the Test team may quickly recede to the backburner. However, Arthur did say Pakistan’s vulnerabilities to the short ball continued, and when they tour Australia in October for two Test matches, he was adamant his side would be better prepared.

“There’s a reason why no subcontinent team has ever won in SA. Asian guys stay legside of the ball. In these conditions you need to stay offside of the ball. You’re going to get out with the short ball if you’re legside of the ball consistently. I think we need to develop a gameplan those batsmen’s techniques. Outside of our own conditions, we’ve got to find players with a skillset to manage the bouncing ball going forward. We play Sri Lanka in the UAE in September, and then we play Australia in Australia straight after that. So we have to have our skillset perfect to manage the bouncing ball by the time we get there. We’ll get our Test batsmen into Australia three or four weeks before the games start.”

However, Arthur was pragmatic about the nature of coaching jobs, and couldn’t resist a bit of gallows humour. “Who knows, I might not be around then in September, there’s a World Cup to go! I’m pretty realistic in terms of being a coach.”