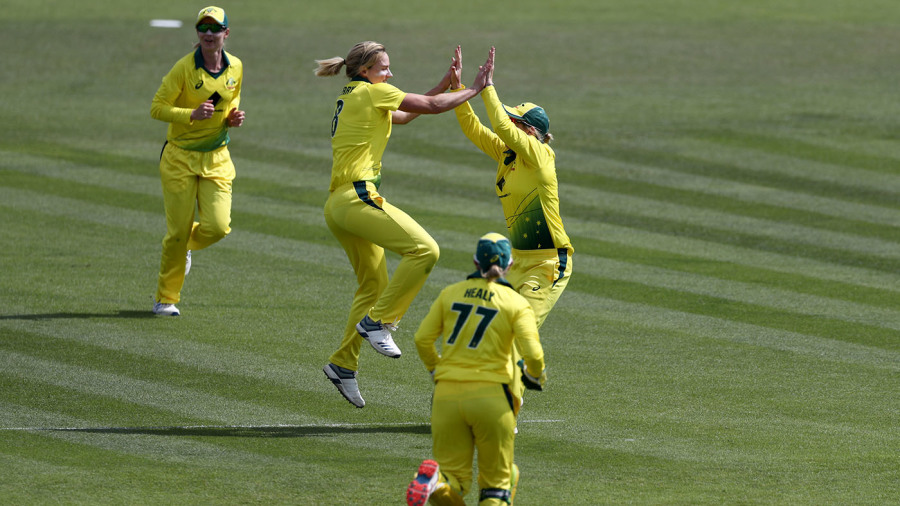 An assured partnership between Meg Lanning and Ellyse Perry took Australia to a comfortable, composed, seven-wicket win at Hove and within touching distance of a white-ball Ashes clean sweep.

This was a considerably different performance from Friday night’s rampage at Chelmsford. At 35 for 3 in their run chase Australia had briefly looked as though they would make hard work of an under-par target of 122 set by England, which owed much to a characteristically punchy innings by Tammy Beaumont.

But after a measured start, Lanning and Perry gradually went through the gears, and were cruising along with the accelerator on the floor by the time they had wrapped up the chase with 13 balls to spare.

If the writing had been on the wall for England during the ODI leg of this Ashes series, it was covering every square inch of plaster by the end of last week’s Test match, and had spilled onto the furniture and made a mess of the carpet by the end of Australia’s innings at Chelmsford on Friday night.

Quite simply, there has been a substantial gulf in quality between these two sides throughout. Australia have been prepared, professional, and polished; England, by contrast, have looked under-cooked.

Sunday’s game did at least hang briefly in the balance: England batted doggedly to recover from a poor start, and then bowled patiently, with a more evident plan, than they had on Friday night.

Ultimately, though, this became a cruise: the experience of Australia’s senior batsmen shone through after they had taken their time to get set, and they wrapped up a fifth victory of the tour.

“We’ve got a lot of pride as a team,” said Beaumont. “We want to prove we’ve got something about us – every time you pull on a shirt for England you’ve got to be up for it.

“[Recent criticism] is tough to take, but that’s part of the job now. We’ve under-performed in this series, so you’ve got to take it on the chin. We’re all very determined and motivated to go again. We’ve got six months until a very important World Cup, and we want to showcase what we’re all about then, so we’ve got some hard work to do and it starts now.”

In the field, Australia began relentlessly. The third ball of the innings was the tenth that Ellyse Perry has bowled to Amy Jones in the white-ball legs of this series, and the fourth with which she has dismissed her, while Danni Wyatt’s difficult series continued as her lofted on-drive swirled in the wind to Beth Mooney at mid-on.

Nat Sciver came into this game in some kind of form, after a determined effort in the Test, but fell hook, line, and sinker for a plan to draw her into playing a sweep. Georgia Wareham came on without a fielder behind square on the leg side; Sciver shaped to paddle her topspinner round the corner, only for it to crash into leg stump.

From 40 for 3, Beaumont and Heather Knight set out to rebuild, but both fell to shots that they would look back on with minimal fondness.

First, Beaumont – who had played a trademark elegant innings while scrapping through for scampered singles – was bowled through her legs while reverse-sweeping a ball that Jess Jonassen had fired in.

And to prolong her struggles with the bat in this series, Knight chipped a googly tamely back to Wareham, almost apologetically. Needing application then acceleration after a steady start, England found themselves five down.

That there were no fours and a solitary six between the 11th and 19th overs demonstrated where England had struggled; they failed to balance aggression with rotation on a two-paced pitch, and only a late salvo from Sophie Ecclestone took them past the 120 mark.

As has become her way, Lanning shuffled her pack like the meanest of casino dealers, as her bowlers sent down 11 one-over spells over the course of the innings.

When Healy whacked 14 from Georgia Elwiss’ opening over, it had looked like Australia’s run chase would be little more than a formality.

Instead, England bowled much better than they have thus far in the series: Healy fell to a top-edge, but Ecclestone was parsimonious, giving no real width and removing Mooney – who was bowled trying to pull – in her two-over Powerplay spell.

But even from 35 for 3, after Kate Cross’ extra bounce had drawn Ash Gardner into a cut straight to point, Australia never looked likely to fold under pressure.

Lanning and Perry, boasting just short of 200 international caps between them in this format, were assured, manufacturing gaps England hadn’t found and knocking singles to the sweepers with minimal fuss.

Lanning was much more restrained than she had been in Friday night’s demolition job, but showed hints of flamboyance, lofting Laura Marsh for a one-bounce four over extra cover, and by the time Ecclestone returned to bowl the 13th over, the pressure had been released.

Perry’s crunched four through wide mid-on, before a pulled boundary in the next over, took the equation to less than a run a ball; the switch had then been flicked, and England had no answer.

Wednesday’s game at Bristol is their last chance to salvage something for their efforts in this series, but on the evidence of this composed, unflustered performance, Australia will be unlikely to let up.