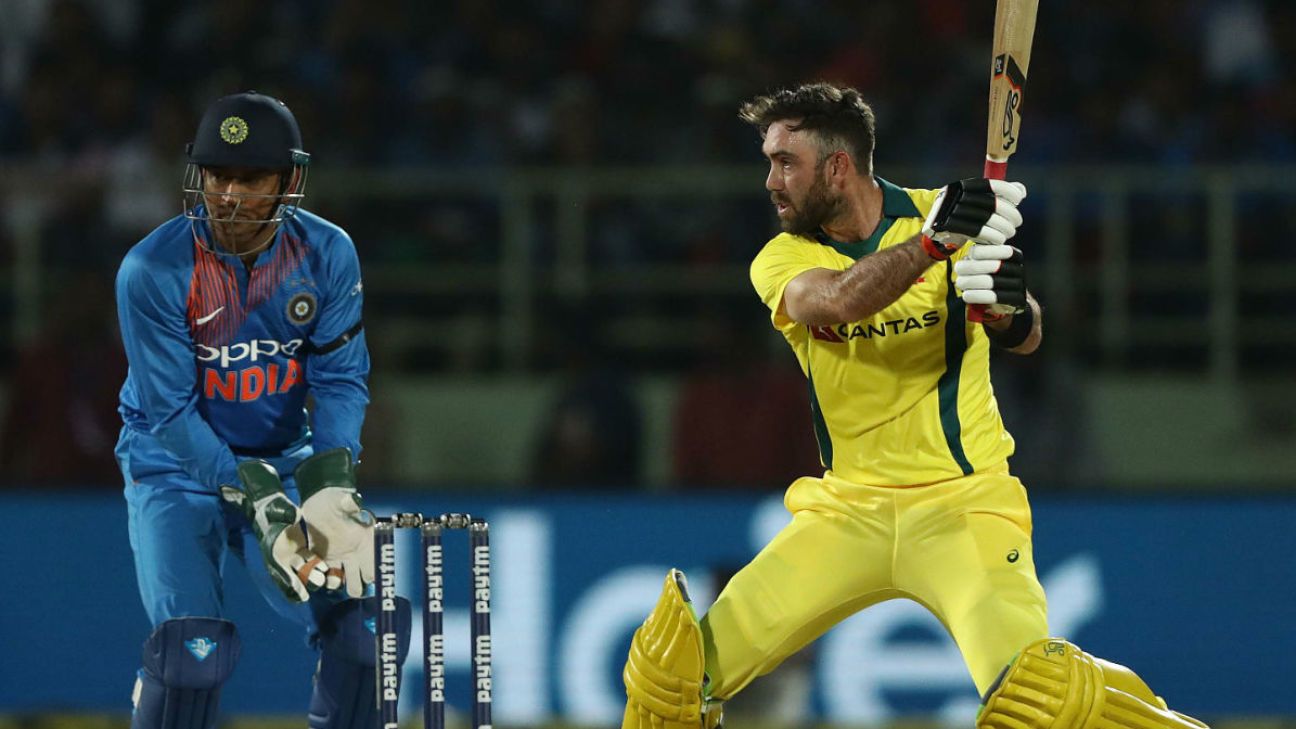 Australia went from a feeling of “can’t believe we’ve stuffed this up” to utter relief during the closing stages of their win against India with Glenn Maxwell stressing the importance of holding their nerve to pinch a close win at the start of an away tour.

Maxwell had been part of an 84-run third-wicket stand that had put Australia within 38 runs of winning the first T20I, before a combination of tight bowling and nervous batting put the visitors under tremendous pressure leaving Pat Cummins and Jhye Richardson to scramble 14 off the last over.

“A lot of the times when you come over here, or when you’re on overseas trips and you get close games, you lose them so often. The home crowd can get behind the home team and you can lose. It can just put your momentum in a different way and the days you’re stuck in the hotel become longer than they are,” Maxwell said. “To win a game like this – by the way we got ourselves in trouble by the last over, we probably should have lost and if it wasn’t for Pat Cummins and Jhye Richardson pulling something out of the hat.

“I did mention to Finchy – if anyone could go out there, face their first ball in the last over and get us 14, it’s probably Pat Cummins. He can do anything. He does it quite regularly. I think I remember him in UAE a few years ago. Think he came out and hit a first ball six. We only needed one to win and he hit it in the air. He got the job done tonight, but for him to keep a cool head, hit a gap on the off side against a guy who hits three out of six yorkers is just real good batting. And Jhye Richardson as well, at the end. For a young player to do that, I’m sure he’d have loved the opportunity to bat with Pat at the end. You see that little cuddle at the end. It was beautiful.”

Australia endured a tough 2018 with their only series win with the white-ball coming early in the year after the Ashes, during the Trans-Tasman T20 tri-series in February. Following that, with the fallout of the ball-tampering scandal in March, they have suffered loses against England, Pakistan, South Africa and India.

“It can just bring the whole group together. It’s been a hard eight or nine months of limited-overs cricket for us, and to have a result like this first game on tour is great for our confidence and something we can hopefully ride and gain momentum,” Maxwell said. “Winning momentum is great but losing momentum, as we’ve found out is pretty hard to turn around. Hopefully we can start off our World Cup preparations on a good foot.”

Maxwell had a crucial role in setting up the win, top-scoring across both teams with a measured 43-ball 56. But those numbers belie the situation he’d walked into. Marcus Stoinis was run out trying to steal a single that was his call, and – yet again – Aaron Finch failed to negotiate an incoming ball. Those wickets off consecutive deliveries and a red-hot Jasprit Bumrah at the top of his mark were the prelude as he walked out. Maxwell had some simple advice to himself.

“Don’t go back! After seeing a bunch of balls keep low, [that was] probably my first thought. I just tried to get forward and stay as low as I could and try and cover my stumps. I think I played and missed three times the first four or five balls. It took a bit of getting used to.”

On a two-paced track, Maxwell had to guard against any habits picked up during a lengthy season on bouncier surfaces at home. The focus, he said, was on creating a swinging arc rather than staying still and punching through the line. This was quickly on display in the fourth over against Umesh Yadav, where Maxwell skipped either side of the line to pick up two boundaries over mid-off and one down at fine leg.

His innings would have only one other boundary shot where he had to expend effort – a slogged six against the turn to Mayank Markande – while most others were grateful acceptances of Yuzvendra Chahal’s largesse.

But perhaps the most impressive part of it all, more so than the restraint, was that it was an innings constructed, in many ways, through smarts obtained by gauging how Australia’s bowlers pulled things back in the middle overs of India’s innings. The debate around Maxwell’s role in Australian cricket has been a regular topic in the last year, but since being implored by Steven Smith to “train smarter” he has shone in T20 recent won the Australian T20I player of the year award.

For now, however, he said he has neither had a chat with Justin Langer about his batting positions in ODIs, nor given too much thought about a World Cup spot.

“I have no idea if I’m going to be in that World Cup squad or what number I’m going to bat, so I suppose it just comes down to opportunity – if I can keep making most of opportunities like tonight,” he said. “It would have been nice to finish it off, but I chose that Chahal [over] as my time to go tonight and I still back that as the right decision. I found Krunal and Bumrah were very hard to get away. We decided that the two leggies were our best opportunities to score.

“If I can turn those sorts of innings into not-out, 75-ish, and be consistent that way, I think I can probably go a long way in penciling my name for the World Cup and hopefully continue that job for the rest of this year.”