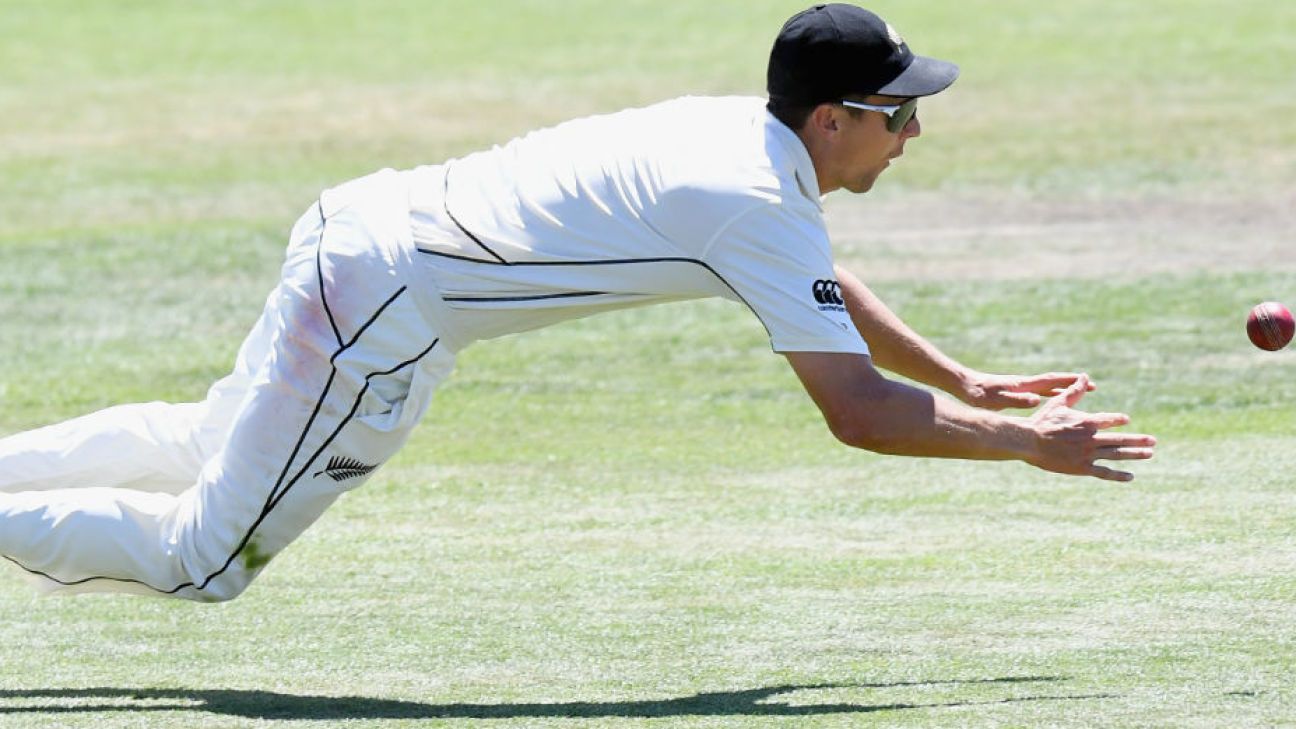 If it’s cliched to suggest that New Zealand are greater than the sum of their parts, and that their team spirit adds a dynamic dimension to their game, it’s because they keep providing examples of their cohesiveness. Take what captain Kane Williamson said was the key moment in New Zealand’s victory in the second Test against Sri Lanka, for example. In a game in which two batsmen scored big hundreds, a seventh-wicket stand rescued New Zealand from 64 for 6, and a bowler took six wickets in 15 balls, it was a catch by a substitute fielder that Williamson said was the highest-impact action in the game.

As drinks approached in the second session of day four, Kusal Mendis and Dinesh Chandimal had settled into their work, and appeared immovable at the crease. Mendis looked particularly good, and had just last week batted out an entire day alongside Angelo Mathews to save the first Test in Wellington. But just as a sense of déjà vu was settling on proceedings at Hagley Oval, Mendis attempted a drive off a length Neil Wagner delivery, and sent the ball about a metre off the ground towards short cover.

Fielding there was Matt Henry, who makes every New Zealand Test squad, but is repeatedly kept out of the XI by the three incumbent seamers. Although Henry might rightly feel frustrated with his situation, he produced the catch of the match to help Wagner claim his first wicket of the Test, and to break Mendis and Chandimal’s mighty 318-ball stand. Diving low to his left – his less favoured side – he plucked the ball centimetres from the turf. Wagner would go on to get 4 for 48 from the innings.

“Matt Henry’s catch was the key moment,” Williamson said after New Zealand had wrapped up a 423-run victory – their highest winning margin not involving an innings result – in Christchurch. “After the first session yesterday, there were signs of a déjà vu. But Henry came on. Being a substitute fielder, perhaps you’re not quite feeling the rhythm of the game, and it can be disruptive. But he was in the right position and it went to him and he was fresh as. That was cool.”

The 1-0 series win, which sends New Zealand to third in the Test rankings, was their fourth in a row. Last summer, they had beaten West Indies and England at home. Just this month, they have won two very different series, beating Pakistan 2-1 on dry tracks in the UAE, before decking Sri Lanka on much greener, faster pitches in New Zealand. Williamson said the achievement was a testament to his team’s adaptability.

“That’s quite a cool thing to achieve – I wasn’t really aware of it. That wasn’t the focus. But if we do reflect on that a little bit, the positives of the different conditions that we’ve experienced and the different oppositions, all factor into being able to get across the line in a series. That makes it quite special. If we look closely at this game it was nice to make that slight step up from the previous game. We saw in that second innings that wickets were really tough to come by, but the effort that the bowlers put in enabled us to make those breakthroughs.

Williamson paid tribute to the efforts of Latham in this series, after the opener topped the run-scoring charts across the two Tests, making scores of 264 not out in Wellington, and 176 in the second innings at Christchurch. His tally of 450 runs in three innings, was 192 higher than that of the next-best scorer, Angelo Mathews, who had also had the benefit of an extra innings.

“Tom’s been outstanding in this series in particular. The way he was able to maintain his focus in terms of playing each ball on its merit for as long as he can and not get ahead of himself, or thinking that he’s in, or he’s done enough, was great. The contributions that he and Nicholls made – they both scored big hundreds. It was required for us to get in that position of strength in this game.”