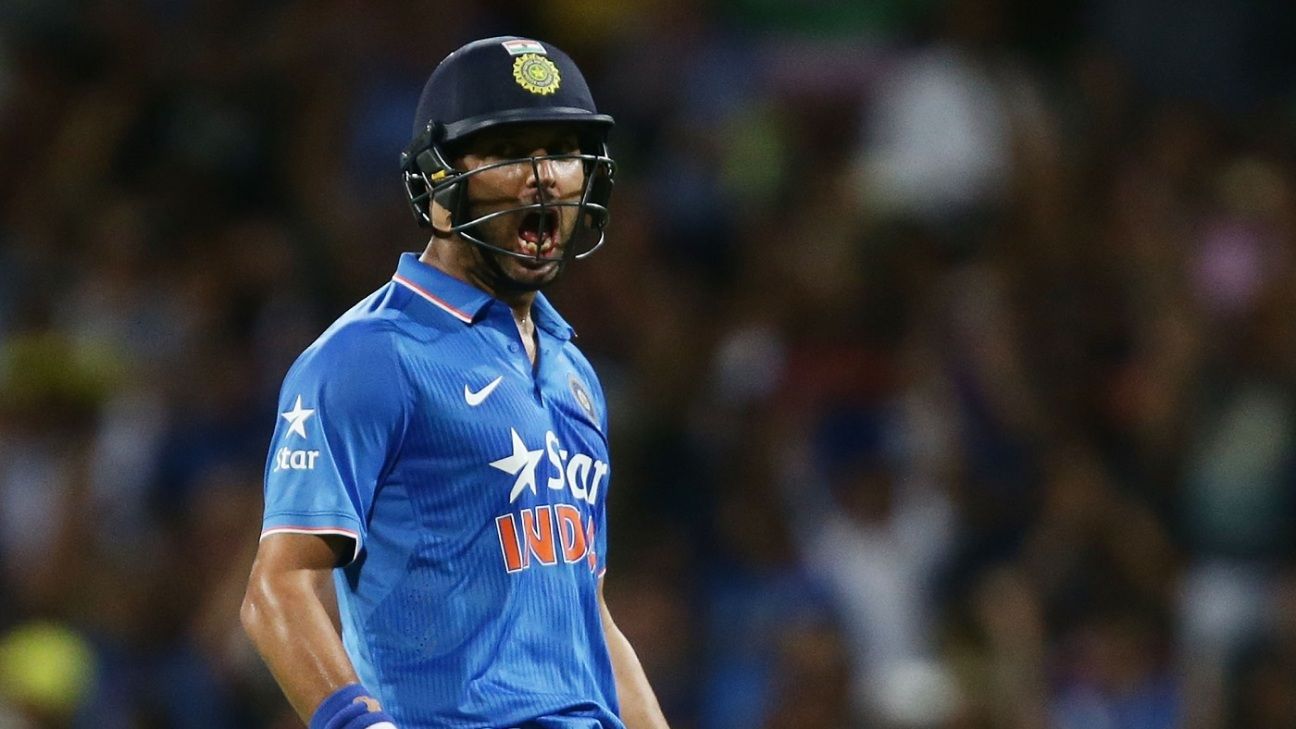 Yuvraj Singh has rued the lack of support from the India team management, which left him with the regret of not playing another World Cup match after his Man-of-the-Tournament performance in India’s 2011 win. Yuvraj believes he deserved another shot with an average of 41.33 and a strike rate of 98.67 in his last comeback that lasted 11 matches. It ended unsatisfactorily for Yuvraj, who was left out after the 2017 Champions Trophy because of a failed yo-yo test, but wasn’t brought back after he cleared the endurance test.

Yuvraj feels the same lack of trust in his replacements – Manish Pandey, Suresh Raina, Ambati Rayudu, Vijay Shankar, Rishabh Pant and Dinesh Karthik – was the big reason for India’s failure at the 2019 World Cup, a tournament in which he felt India had no business exiting before the final. He warned India against doing the same with Pant in the lead-up to next year’s T20 World Cup in the light of public criticism of his batting by captain Virat Kohli, coach Ravi Shastri and batting coach Vikram Rathour.

“That regret will be with me,” Yuvraj said in an interview with the news channel Aaj Tak. “But people should be happy for me too that after such a grave illness [cancer during the 2011 World Cup], after struggling in domestic cricket for two years, working hard, I made a comeback and scored my highest ODI score [150 in January 2017, against England from 25 for 3]. That is also a big achievement. That is the other side. Yes, there will be regret, but there was a number of issues. There was no support, hardly any support from team management or people around. If that support had been there, I would have played another World Cup. Whatever cricket I have played, I have played on my own terms. I didn’t have a godfather. I feel proud that I have played so much cricket despite the illness.”

Expanding on the subject of support (or the lack of it), Yuvraj spoke of the circumstances he was dropped in. “I remember, in the eight-nine ODIs I played, I won two Man-of-the-Match awards [including one against Pakistan in the 2017 Champions Trophy]. My strike rate was 98 and I was averaging 42-plus so I was doing really well in the middle order.

“If you want to get the best out of somebody, you have to make them feel secure. A player can never perform when he’s insecure. That was the big reason India didn’t win the World Cup.”

“After the injury [during the West Indies tour just after the Champions Trophy], I was told to not play the last T20I and prepare for the Sri Lanka tour [later in 2017] and then suddenly the yo-yo test came in between. Whoever failed the test did not get selected. Suddenly there was a U-turn in my selection. And then, obviously, I had to go back and prepare for the yo-yo test, at the age of 36. After I cleared the yo-yo test, I was told to play domestic cricket, which I played.”

Yuvraj felt these were just excuses on the part of the men in charge. “They actually thought I wouldn’t be able to clear the yo-yo test because it will be difficult at this stage,” he said. “And after that, obviously, ‘it’ll be easy to tell him’. I felt it was a bit of that [excuses]. ‘He wouldn’t be able to do the test.’ Once it happened, they got caught in a space where they didn’t know what to say to me. The thing was unfortunate. A guy who has played international cricket for 15-17 years, you should sit him down and tell him [why he is being dropped]. No one told me.

“They didn’t tell Virender Sehwag, they didn’t tell Zaheer Khan. Compared to them, I haven’t played that much cricket. But regardless of who the player is, the person in charge should talk to them upfront that ‘this is the case, we are looking at the youngsters and we have taken this step’. You feel bad at first but you at least give them the credit that they were honest with you, that they told the truth to your face.”

He argued that the same lack of clarity, which led to lack of stability, hurt India at the World Cup, where India failed to recover from a top-order collapse in the semi-final against New Zealand. “I was dropped, then Manish Pandey came in, then one-two other players came in, then KL Rahul came in,” Yuvraj said. “KL was tried, then Raina came back, then they went with Rayudu. Rayudu played for eight-nine months, he scored 90 in NZ, Man of the Match, and your team should have been set there. Then before the World Cup, you lost to Australia 3-2, Rayudu had a bad tournament, suddenly Vijay Shankar came in.

“And the highest score by an India No. 4 at the World Cup was 48. I don’t really understand that. The captain, coach and selectors should have known that No. 4 is a very important spot especially in conditions in England, where the ball seams. The No. 4 batsman has to be technically strong and has to be given a number of opportunities.

“Vijay Shankar didn’t have that experience. Rishabh Pant didn’t have the experience. Dinesh Karthik, who was experienced, was sitting out and suddenly goes to bat in the semi-final. I really don’t understand what the think tank was thinking. If you want to get the best out of somebody, you have to make them feel secure. A player can never perform when he’s insecure. That was the big reason India didn’t win the World Cup. I thought India and England were the best teams in the World Cup. There was no reason why India shouldn’t have played the final.”

Yuvraj said he saw shades of himself in the big-hitting wicketkeeper-batsman Pant, but felt the youngster needed more support and understanding from the team management. “The big hitters are always talked about, but I had support from [Sourav] Ganguly and there was nobody criticising me every day,” he said. “Everybody is criticising him. When things are not happening, talk to him, try to understand his mind. I feel that Rishabh’s issue is his mental make-up. How do you get the best out of his mental make-up? He has made runs in the Ranji Trophy and has scored two away Test hundreds; 150 in Australia, one in England. He’s played some big knocks. He’s shown his talent, he’s been fantastic in the IPL. He’s played eight-ten ODIs, so what are you expecting of him?

“Obviously he didn’t pick the best shots to hit, but how will you get out his best? You can’t suppress him and get his best. You will have to put an arm around his shoulder, praise him, take him to the nets. You will have to sit with him in the evening, talk to him over dinner: ‘what’s going on in your mind?’ Somebody like the batting coach should take that opportunity to get the best out of him. Statements like “fearless and careless” is not going to help anybody’s case. It is going to spoil his mental make-up.”

There was a dig at the selectors too. “That is the decision the selectors… well, selectors actually don’t make that many decisions… the team management has to sit with the chief selector and decide let’s make the guys secure first. If we lose, it’s okay. If we lose again, it’s still okay. The team is not that bad. It will still win. They need to groom guys.”

Yuvraj also called for more support for wristspinners Kuldeep Yadav and Yuzvendra Chahal as India opt for less attacking spinners who provide depth in batting. He said it was “stupid” to aim for depth at the cost of proper bowlers.