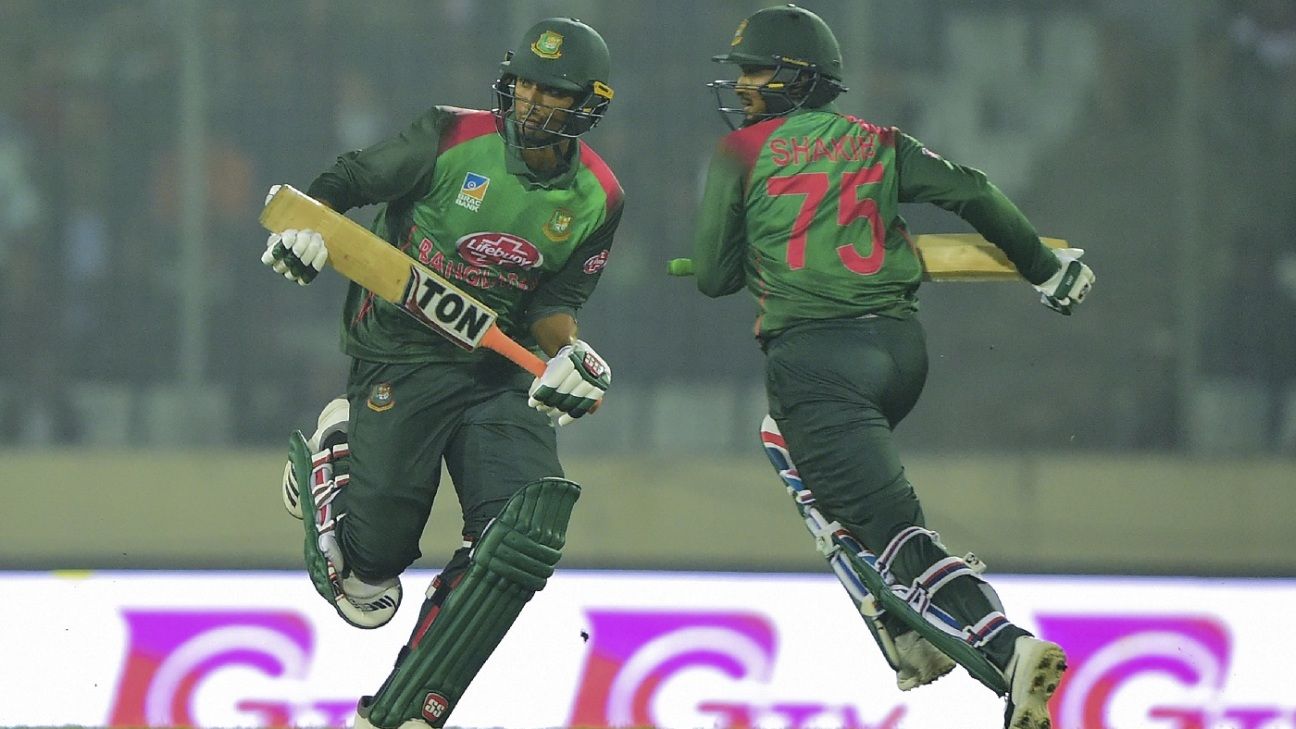 Two good partnerships handed Bangladesh a major advantage over West Indies in the second T20I as per the home captain Shakib Al Hasan. After Liton Das and Soumya Sarkar added 68 for the second wicket, Shakib and his deputy Mahmudullah added 91 in the last seven overs in an unbroken fifth-wicket partnership as Bangladesh posted 211 for 4. West Indies threatened to chase that down at times but ultimately fell short by 36 runs.

Shakib said the Bangladesh batsmen learned from their bullish approach in Sylhet and batted better in Dhaka.

“We batted really well, with Liton giving us the start and Soumya continuing with it,” Shakib said. “My partnership with Riyad [Mahmudullah] bhai was very important. It would have been easy for us to lose the way, but that [partnership] gave us the 20-30 runs which turned out to be an extra strength. I think a 50-plus and a 75-plus partnership in a T20 ensures a win 80% of the time. Essentially, batting did the real job for us.

“The batsmen learned from the last game. When the ball was coming at 140kph, we were trying to hit them at 180kph. We used the pace well today and generally batted quite sensibly. It was the right game plan.”

Shakib himself had a fantastic outing, taking his maiden T20I five-wicket haul after contributing an unbeaten 26-ball 42 with the bat, adding crucial runs with Mahmudullah. Shakib said it was tough to handle the ball in the heavy dew at the Shere Bangla National Stadium.

“I didn’t think I would take a five-wicket haul in these conditions,” Shakib said. “Getting wickets is a matter of luck. I rate this bowling performance quite highly. I thought I bowled well.

“My batting was important at that moment. If one of us had fallen then and had lost another [wicket] quickly, we wouldn’t have reached such a big score. We were wary of a collapse when we lost three quick wickets.”

Shakib said that during their partnership it was Mahmudullah who shifted the course of the match, with his three consecutive fours off Sheldon Cottrell immediately after Bangladesh lost three quick wickets. “Riyad bhai shifted the pressure at that point, so a lot of the credit goes to him. It made batting easier for me as I had to focus on rotating the strike and hit the bad ball for four.

“He was playing a lot of shots, so building the innings became smoother. Riyad bhai played a special knock.”

Shakib said Mahmudullah should always start in an aggressive fashion, rather than build an innings conventionally. He said he should even do that in Tests, since he has found success in white-ball cricket with this approach.

“I think Riyad bhai does well when he has a positive frame of mind. I might be wrong but I feel that he is wrong when trying to build his innings. Going after the bowling is more suitable, especially in T20s.

“Even in ODIs, if you look at his innings in Cardiff [in the 2017 Champions Trophy], he attacked from the start. Even in Tests, he could also try this approach so that he can get his body and feet moving.”