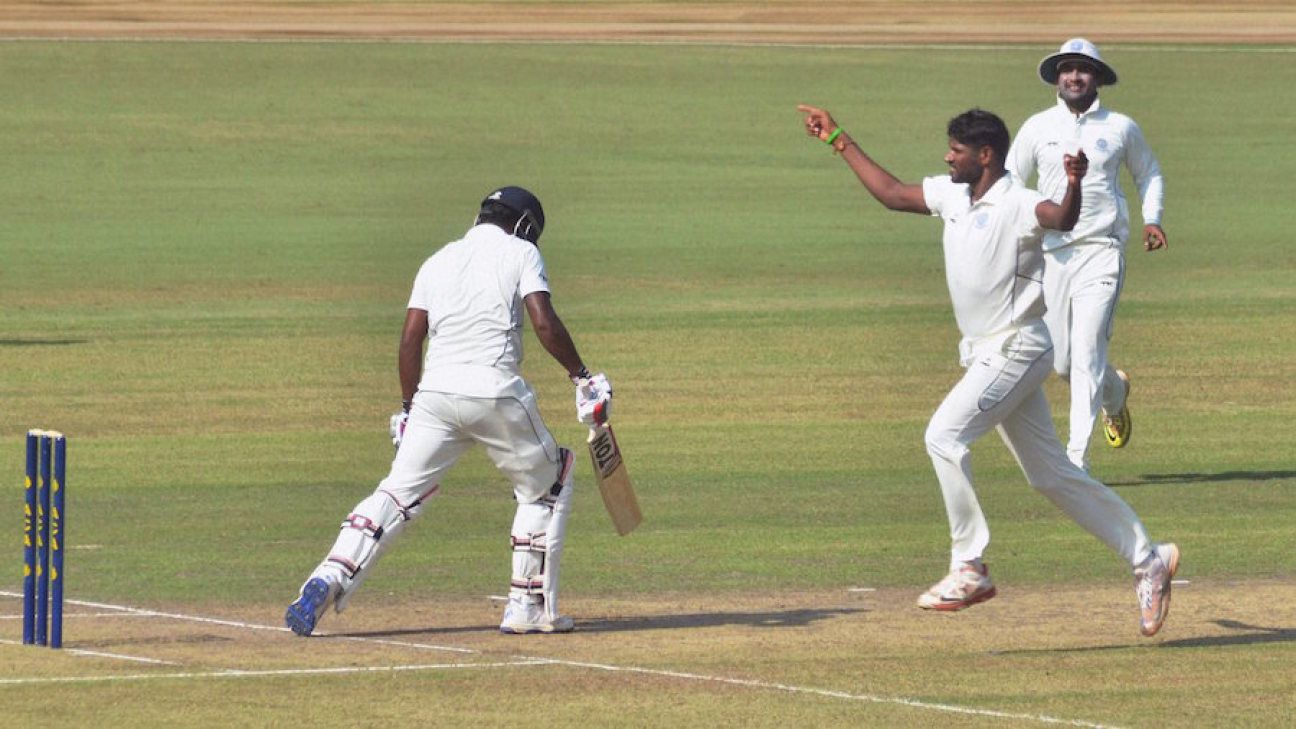 They were in a great position to control their fate, but the only problem was, they were chasing 343 against Andhra on a spicy Holkar Stadium surface in Indore.

From 35 for 3, MP lost six wickets for a grand sum of zero runs to lose outright. This meant they were knocked out of quarter-finals contention despite finishing the league stage with three outright wins. Andhra, meanwhile, avoided relegation. MP lasted all of 52.4 overs across both innings combined, managing scores of 91 and 35.

In the second innings, opener Gaurav Yadav was absent hurt.

How does MP’s loss affect the qualification scenario of other teams?

For starters, Karnataka are through despite losing inside two days to Baroda. Vidarbha, who are nine down and still 76 adrift of a first-innings lead against Saurashtra, are already into the knockouts. If they do get the lead, Saurashtra will join Vidarbha on 29 points, but have a slightly inferior quotient to the defending champions.

The final two qualifying positions from both the groups will be decided on Friday. Punjab are seeking an outright win, preferably with a bonus point, to qualify, but have been resisted by Bengal’s Manoj Tiwary and Abhimanyu Easwaran.

Starting their second innings with a deficit of 260, the third-wicket pair have added 180 and are going strong. Easwaran is unbeaten on 100, his third century of the season. His previous two scores read: 186 and 183* against Hyderabad and Delhi respectively. Tiwary, meanwhile, is unbeaten on 90. So far this season, his only 100-plus score was the unbeaten 201 against Madhya Pradesh.

Like Punjab, Himachal Pradesh too need a win. Currently on 22, six points will take them to 28. Should this happen, Baroda will be eliminated on account of inferior quotient. Gujarat, who are on 26 points, will be hoping Punjab don’t win, for such a possibility will eliminate them. If Bengal keep Punjab to a draw, they will be through. Himachal are ahead of Kerala by 286 runs, with two wickets remaining.

Rajasthan are through, with Uttar Pradesh all but sealing their berth. As such, they needed no more than a first-innings lead to qualify, and they have achieved it against Assam. The only way Jharkhand can beat them to the second spot is if they win – which they could against Jammu & Kashmir – and UP lose outright. Assam resume the final day behind by 342. So even a mathematical miracle can’t give them a win here.