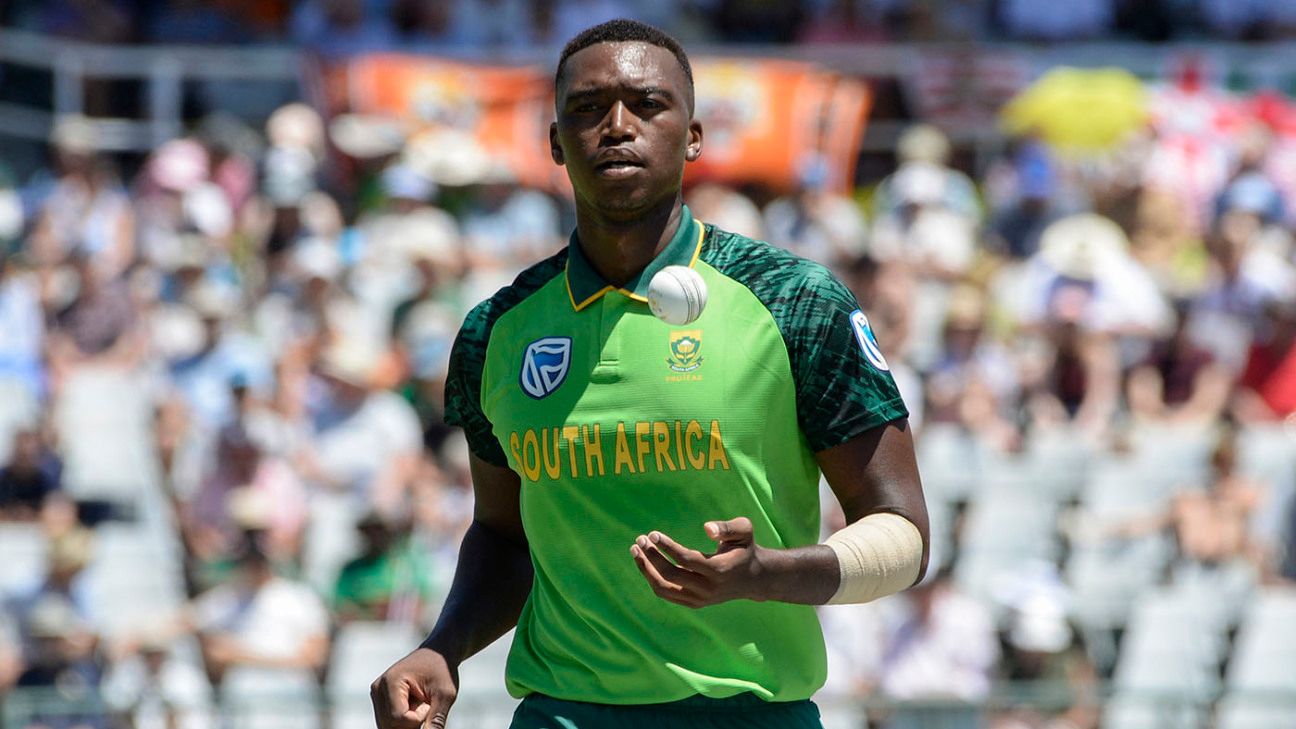 Lungi Ngidi, South Africa’s highest white-ball wicket-taker in 2020 so far, has given himself a six out of 10 for his performances over the past summer and believes there is room for improvement. Ngidi did not play any of South Africa’s four home Tests after injuring a hamstring in the Mzansi Super League (MSL) in mid-December last year but was part of all six T20Is and four of the five completed ODIs and finished with 25 wickets in total.

“If I had to rate my performance over the last summer, I probably rate it at about a six. It was good, but to me it still wasn’t good enough,” Ngidi said. “There were a few games where I could have gone for a lot less runs. I picked up a few wickets and that’s my job, so I was happy with that but it’s not the finished product. I still feel I can deliver a whole lot more and a whole lot better.”

The numbers show he is not wrong about being expensive. Ngidi’s T20I economy rate this year has been 10.6 while he conceded 5.67 runs an over in the ODIs. Both are his highest over the three years of his international career but need to be assessed in context.

His most expensive ODI performance came in Johannesburg against England where his first five overs cost 52 runs but he returned to take 3 for 11 in four overs at the death and almost helped South Africa snatch victory. Similarly, in the three T20Is where he conceded more than 10 runs an over, Ngidi was among the wickets, and got rid of Ben Stokes in his penultimate over in Centurion, taking two wickets in his final spell against England in Durban, and playing a key part in defending 43 off the last five overs against Australia in Port Elizabeth.

Ngidi finished the home summer with a career-best 6 for 58 in the ODI in Bloemfontein where he took wickets at the top and tail of the innings to cap off a superb comeback from injury and fitness concerns. He credited the CSA conditioning camp, which took place in January for Ngidi, Tabraiz Shamsi, Jon-Jon Smuts and Sisanda Magala, and bowling coach Charl Langeveldt for his success. “Every person has a different formula and I was still trying to figure mine out, so going to that camp helped me do that. I figured out that I have probably got to work a lot harder than most people. It doesn’t come as naturally to me,” he said. “Having Langeveldt back has been really good for me. He is really supportive and encourages the way I think. He is very understanding with that and he has got a lot of knowledge. He is a very skillful bowler. It has really helped my cricket a lot.”

He also gave a nod to South Africa’s batsmen, who improved as the summer wore on, and found new names to rely on. Centuries came from Heinrich Klaasen and Janneman Malan and the mood in the camp lifted. “I really had fun watching the guys go about their batting and the confidence that they showed. You could just see how happy the camp was when guys were performing and scoring their runs,” Ngidi said, adding that by the time South Africa got to the ODI series against Australia, their last of the season, a series-win was a non-negotiable for them.

South Africa had not managed to claim the trophy in any of the four rubbers that went before (Tests, T20Is and ODIs against England and T20Is against Australia) but whitewashed Australia 3-0 in the ODIs to restore their pride. “The guys were desperate to win, so I think that made the difference at the end of the day in terms of the performances we put out. It’s not nice losing a series at home, so to come out and want to win was one of the main things that I think drove the players towards that whitewash,” Ngidi said. “Winning games like that gives you a lot of confidence and moving forward to India, you could see a different energy in the team and that was really exciting to see. But that’s probably gone now, so we are going to have to start from scratch and rebuild towards that energy that we had.”

In India, South Africa did not play a game after the Dharamsala ODI was washed out and the remaining two matches called off as the coronavirus pandemic broke. Since then, Ngidi has been at home and has not seen his family in over a month. South Africa returned from India on March 18 and the squad was asked to self-isolate for two weeks. Eight days into that period, South Africa began a 21-day country-wide lockdown, which has been extended to a 35-day stay-at-home exercise due to end on April 30. “It’s always difficult being away from the family but it’s better this way. Coming from India, going through Dubai, I couldn’t risk going home,” Ngidi said. “But they seem to be doing well, so that does lower the anxiety levels a bit.”

Like many of his team-mates, Ngidi has been spending his time trying to keep fit but is itching to get out on the park again. “|I live in an apartment so I can pretty much just work out and watch TV and read a bit. I am watching a lot more documentaries and brushing up on a lot of general knowledge that I didn’t have before,” he said. “What I am looking forward to most after this is probably just to go outside and have a jog. But also just a nice net session with the team and just being together on the field again, is something I am really looking forward to.”