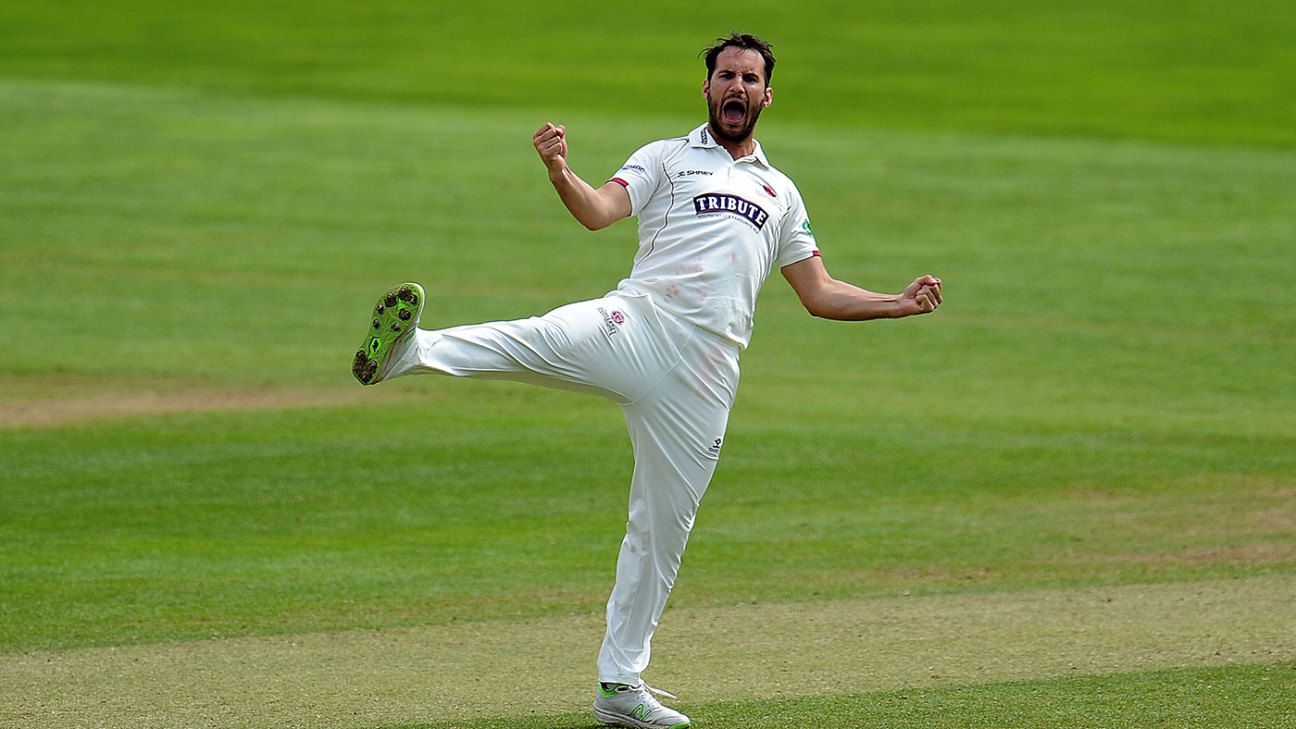 Lewis Gregory believes he is a vastly improved bowler from the raw rookie who came close to an England one-day cap against Ireland four years ago, and credits his return to the “wilderness” of county cricket for the new-found consistency that has propelled him into the Test reckoning in an Ashes summer.

Ireland are once again the opposition, after Gregory was named in a 13-man squad to play in next week’s one-off Test at Lord’s. And while his opportunity has arisen, in part, due to the post-World Cup absences of both Jofra Archer and Mark Wood, he recognises a golden opportunity to stake his claim for a role against Australia, when the Ashes get underway at Edgbaston on August 1.

Gregory earned his opportunity after claiming 44 wickets at 13 in Somerset’s impressive start to the season – a run of form described by the national selector Ed Smith as “remarkable”. And while he claimed to have been “speechless” when he received the call from Smith on Wednesday morning, he also conceded that it had been at the back of his mind.

“I’ve had a really strong 12-18 months, but there’s a lot of talent in English cricket, and there’s a lot of guys that are probably in the same position as me,” Gregory told reporters in Canterbury, where he was captaining England Lions in their four-day fixture against the touring Australians.

“It’s been a really good summer this summer so far, so I obviously always wanted this to happen and was kind of hoping that would happen, but I was trying to play it down a little bit, in case it didn’t. But I was really excited when Ed called me this morning. I was a little bit speechless, I didn’t know what to say.”

Gregory claimed not to have thought much about the prospect of making his Test debut at Lord’s – and that rang true given when he suggested he might take the chance to catch up with his former Somerset team-mate and house-mate, George Dockrell, who was last week omitted from Ireland’s squad.

“Obviously it’s quite fresh news and been quite busy today,” he said, referencing the final day of the Canterbury fixture, in which he claimed four wickets across two innings in a hard-fought draw. “It’s been a really tough game on a pretty docile wicket, and there’s some sore and tired bodies in there, but when you get the news I got this morning it gives you a little bit of a lift, and you feel a little bit better.”

Gregory may lack the express pace of Olly Stone, the other uncapped quick in England’s 13-man squad – let alone the two absentees, Archer and Wood. Nevertheless, he has been a pivotal figure in Somerset’s most sustained bid for that elusive maiden County Championship title, and credited the quality of the cricket around him for helping to raise his game.

“I think it helps if your team is winning games and you’re putting performances that are helping to win games,” he said. “That’s the sport at the end of the day, you’re there to win games and help contribute to win games.

“Luckily, Somerset have been doing that this year. It’s not just me, it’s been a lot of guys, but you rock up each week trying to outdo your opposition, turn them over. We’ve been able to do that and thankfully I’ve put in some performances to help that.”

Coincidentally, Gregory’s last involvement in an England squad also came in the aftermath of a World Cup. In 2015 he was called up for England’s rained-off ODI in Ireland, but quickly returned whence he came following the sacking of the then-coach, Peter Moores, before being sidetracked with a series of injuries.

“Obviously that was one of the best moments of my career so far,” said Gregory. “I was quite raw in 2015, I hadn’t played a huge amount of cricket, and I think going back into the wilderness of county cricket, you get a lot of opportunity to play.

“Games come thick and fast, you work things out, and learn your strengths and your weaknesses,” he added. “You work out what you need to do to succeed, and I think my bowling has become a lot more consistent and the skill has developed with that.

“I think, a few years’ ago, on pretty placid pitches, I probably could have gone at four or five an over, so I’ve had to learn the other side of bowling. I’ve always wanted to take wickets but, to add that to the control element, that has really improved me as a cricketer.

“It’s been always been a dream of mine, and I’ve always believed that I was good enough and have the ability to play international cricket.

“The last two summers, I’ve put in performances consistently enough to raise that belief. And I always knew that, if I kept performing, there would be an opportunity at some stage. If next week’s that, then hopefully I’ll go and perform and put my hand up for an Ashes call as well.”

Even if he’s not yet first in the queue for the Ashes, Gregory has already struck a blow for England – literally, after pinning Matthew Wade a nasty blow on the elbow on the third day at Canterbury, one that required him to have an X-ray after retiring hurt.

“I spoke to Matt this morning and he’s good to go,” said Gregory. “It was a bit of a bruise, it hit him in a nasty spot, but he’s been in quite good form over the last few weeks so hopefully I’ll give him a break for a couple of weeks, and he’ll come back and the boys will be able to get after him.”