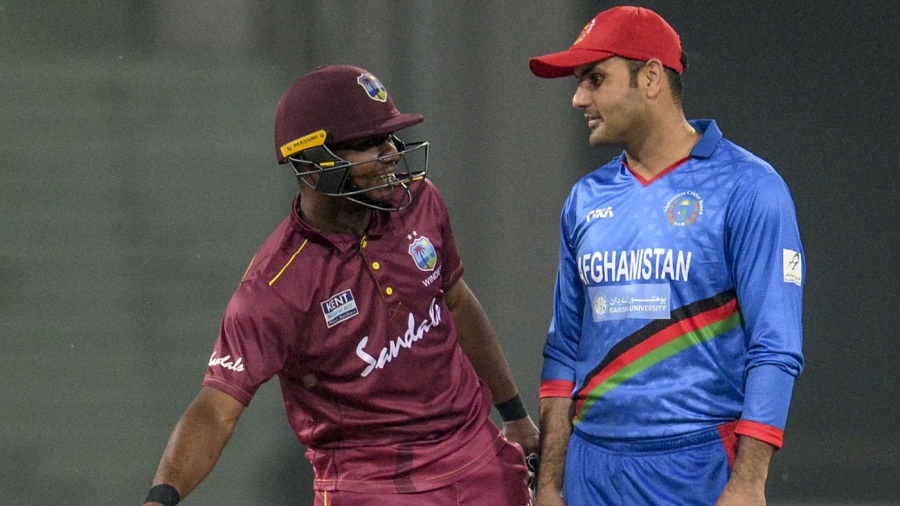 After a 3-0 drubbing in the ODI series, Afghanistan had many things going in their favour in the first T20I. First of all, it was the format they prefer the most. Secondly, their captain Rashid Khan won an important toss and made the right decision to bowl first. Then their bowlers restricted West Indies to a chaseable total of 164.
During the seventh over of the chase, Fabian Allen hobbled off the field due to what looked like a knee injury, leaving West Indies a bowler short. There was a decent amount of dew as well to make things difficult for West Indies.

Despite all this, the result didn’t go in Afghanistan’s favour. The West Indies seamers showed great skill with the wet ball, bowling cross-seam and using all sorts of slower balls to make the run-scoring difficult. The fact that Afghanistan didn’t have a great start didn’t help their cause either. With the series on the line, they need to regroup fast.

Under Kieron Pollard, West Indies look a more determined outfit, ready to fight out for victories. Despite losing Allen and Sheldon Cottrell bowling just two overs, they still managed to bowl 20 overs. That speaks of the depth they have in the bowling department.

While apart from Evin Lewis and Pollard, their batsmen struggled to score freely, it may not be a concern for now as they look to wrap up another series win.

Rashid Khan might not have had a great year in ODIs, having taken 15 wickets at 50.60, but he is still not easy to get away in the shortest format. After going for 15 off his first over in the opening game of the series, he bounced back to concede only 19 from his next three while dismissing a set Shimron Hetmyer. Afghanistan, though, would want their captain to pick up more wickets.

Shimron Hetmyer‘s struggles with the bat continued. He might have the six-hitting ability but the left-hand batsman needs to work on his strike-rotation skill. During the first T20I, he was stuck on 8 off 13 balls at one stage before perishing for a run-a-ball 21. If he fails to adapt quickly, he might find it difficult to get into the XI when Nicholas Pooran returns from his ban.

There wasn’t much wrong with the Afghanistan selection for the first match. What they need is better execution. Although there is a case for replacing Hazratullah Zazai with Javed Ahmadi, it won’t be a surprise if they go with an unchanged XI.

In case Allen fails to recover in time for the second T20I, West Indies may replace him with another left-arm spinner Khary Pierre.

All three T20Is are to be played on the same dark-soil surface. With dew expected later, making the ball come on to the bat better and causing problems to bowlers, it should be an obvious choice to bowl first. The temperature in Lucknow is supposed to be hovering around the 22-degree Celsius mark.

“A lot of dew [in the first T20I] but you have to practice for it. Practice bowling with a wet ball, that’s what I usually do when I am at home because you may have to do so in these sort of conditions. So it’s nothing new. No excuses, you just have to do what your captain asks and win games for West Indies.”
Kesrick Williams on how he tackles dew while bowling