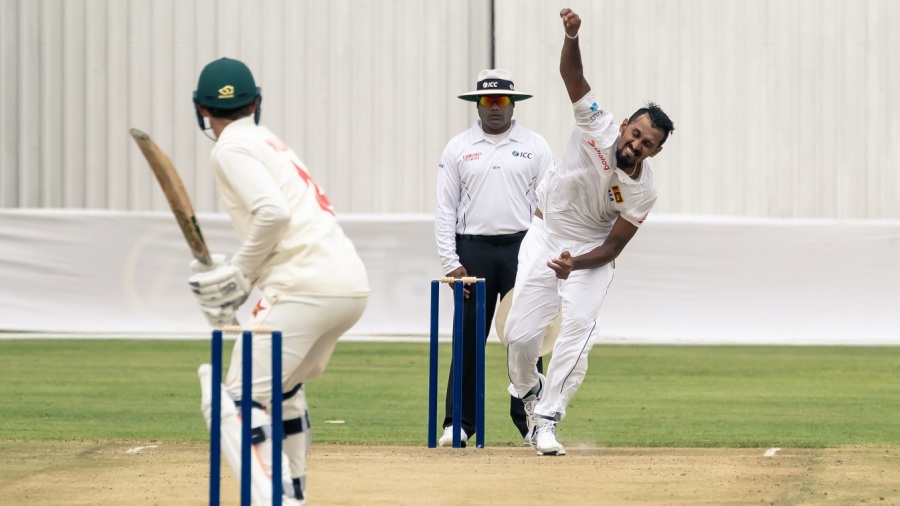 Having been stalled for most of day one by a flat surface and Zimbabwe’s diligent batting, Sri Lanka finally made headway in Harare, claiming three wickets before lunch. Thanks to day one’s hard work, however, Zimbabwe can still dream of a total in the range of 400, particularly as long as Sikandar Raza remains at the crease. The hosts moved slightly faster through the course of the session than they had for much of day one, making 71 runs in 26 overs – a scoring rate of 2.73.

Suranga Lakmal, the leader of Sri Lanka’s attack, had not quite been at his best on the first day, perhaps toiling too long outside off stump, essentially delivering too many balls that were safely left alone. He made a much better start on day two however, coming around the wicket early to left-hander Craig Ervine to angle the ball into the stumps.

Ervine was clearly less comfortable against this line of attack, and although he survived Lakmal’s first spell, overnight partner Brendan Taylor would not be so fortunate. Having scratched his way to 21, Taylor was hit in front of the stumps by a seaming Lakmal delivery that would have probably gone on to shave leg stump.

Zimbabwe’s new batsman Sean Williams, playing his first innings as captain, made a tetchy start as well, unable to get his timing right against either the quicks or the spinners. Ervine, however, had settled following the conclusion of that Lakmal spell, and looked – as he had on day one – like Zimbabwe’s most assured batsman. The pair put on 39 together at a relatively modest pace before Williams was drawn into a loose drive by Lasith Embuldeniya, who floated the ball wide and had it collect Williams’ outside edge.

Although lunch was less than 20 minutes away at Williams’ departure, Ervine was unable to stick around until the break, lasting only a few further deliveries. It was deservedly Lakmal who removed him for 85, after Ervine attempted to punch through the off side and wound up only playing the ball back onto the stumps.