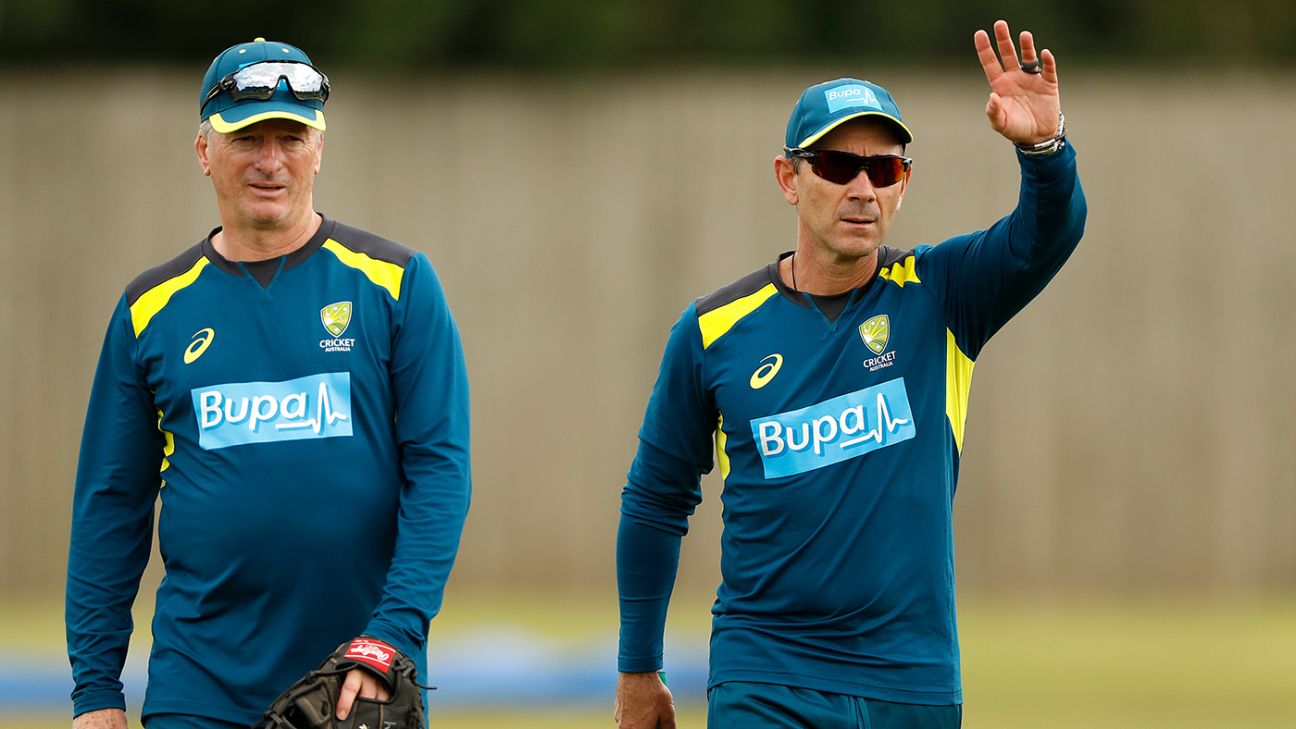 At the lowest moment of a tumultuous first six months, mentoring a weakened Australian team through the troubles waters that followed the Newlands scandal, Justin Langer‘s wife Sue broke down in tears at the toll the job was taking on their family.

Over breakfast at the team hotel in Sydney, the Langer family was about to be separated again as the coach went to travel to the SCG for another day of being ground down by Virat Kohli’s relentless Indian touring team, and Sue and their four daughters travelled home to Perth after being together for Christmas and New Year.

Still wrestling with the scrutiny of the job, a world away from what he experienced as coach of Western Australia and the Perth Scorchers for the preceding six years, Langer was confronted by a sight he could not recall in 23 years of marriage.

“We got to day three or day four of the last Test in Sydney and my family had been over for Boxing Day and for the SCG Test match,” Langer told ESPNcricinfo. “I’ve known my wife since I was 14 years old, so she knows everything about me, and they were leaving. I had to get in the team car to go to the ground at 8.15am. They were leaving that day, and we were at breakfast at 8 o’clock and my wife started crying at the breakfast table in front of my daughters.

A few days later, ahead of the ODI series that began Australia’s run to the World Cup, Langer was confronted by some awkward questions about how Glenn Maxwell had been wrongly led to believe he would be playing long-from cricket for Australia the year before. The press conference exchange did not play well on camera, emphasising to Langer much of what Sue had told him. He now regards the period to be as critical to his coaching career as being dropped from the Test team in 1993 and 2001 was for his playing days.

“I got, I’d say two out of 10 grumpy with the journalist in Sydney, and I was also amazed at the backlash of that as well,” Langer said. “I apologised straight after the event, that’s me, but I realised then and the way people said ‘he’s getting angry, he’s losing it’. I didn’t feel that but my wife was getting upset, that was a real moment. I’ve said privately and publicly a few times if I look back to my career, 1993 when I got dropped for the first time, really tough time, but pivotal in my life.

“I got dropped in 2001, a really, really tough time, but pivotal in my life. I look to January 2019 in Sydney, really tough time, but I’ve got no doubt it’ll be a massive part of my evolution as a coach. I got a really nice email from Malcolm Conn [former journalist and now New South Wales communications manager], just after that press conference. He’d obviously watched me grow from a young player to a player who retired however many years later and he gave me some really good advice. He knows what it was, but when I’m getting that sort of feedback from my wife, that sort of feedback from the team, I knew I had to find ways to get better and hopefully I’ve done that.”

Langer has subsequently been steadily surrounded with more and more trusted allies to help him in the job while also balancing him personally. Ricky Ponting was recruited as an assistant coach for the World Cup, Steve Waugh as a mentor for the early part of the Ashes series, and Ben Oliver has been formally installed as the new head of national teams – a similar role to the one he performed successfully alongside Langer with WA.

In an interview with ESPNcricinfo to mark 10 years of coaching, Langer also reflected on the infamous 2009 “dossier” leak in which his frankest thoughts about English cricket and players such as James Anderson were splashed across the pages of the Telegraph, an episode that happened a matter of months before he moved from playing retirement to an assistant role with the Australian team.

Recalling what he had written about Anderson in what was originally intended as a personal email of advice to the then national team coach Tim Nielsen, Langer said that the evolution of the Englishman from youth to maturity and greatness mirrored how he had grown and changed so much, first as a cricketer and now a coach.

“If we get specific, I said in that email, which caused great headlines, that James Anderson was a pussy,” Langer said. “Now that’s my way of just talking about his body language. When we played against James Anderson as a young man, we felt that if we got on top of him, hit anything loose he bowled, because his body language would drop a little bit. I’d take back the word I used, that wouldn’t be my style now, that’s for sure, but it was two Aussie blokes talking to each other about someone’s body language.

“Do I think that now about James Anderson? Absolutely not, and I hope you write this in the article, James Anderson has turned into a brilliant, great English fast bowler. He will be the person we talk about most when we go through our plans for winning this Ashes. He’s a brilliant player. When he was a young man he was different than he is now, and that happens with most. When I was a young batsman, I was dour, I couldn’t hit the ball off the square, I probably didn’t smile much, and people would’ve said that about me when I was younger, to where I finished up playing.

“That was my interpretation of him, having played against him, I didn’t know him at all, it’s not personal. Would I say that now? No way in the world, he is a great bowler and we respect him enormously, I personally respect him for his longevity, for his skill. The greatest compliment we can give James Anderson now, the same person who wrote that 10 years ago, me as young and naive, wasn’t expecting it to get into public hands, certainly wouldn’t say that about him now.”