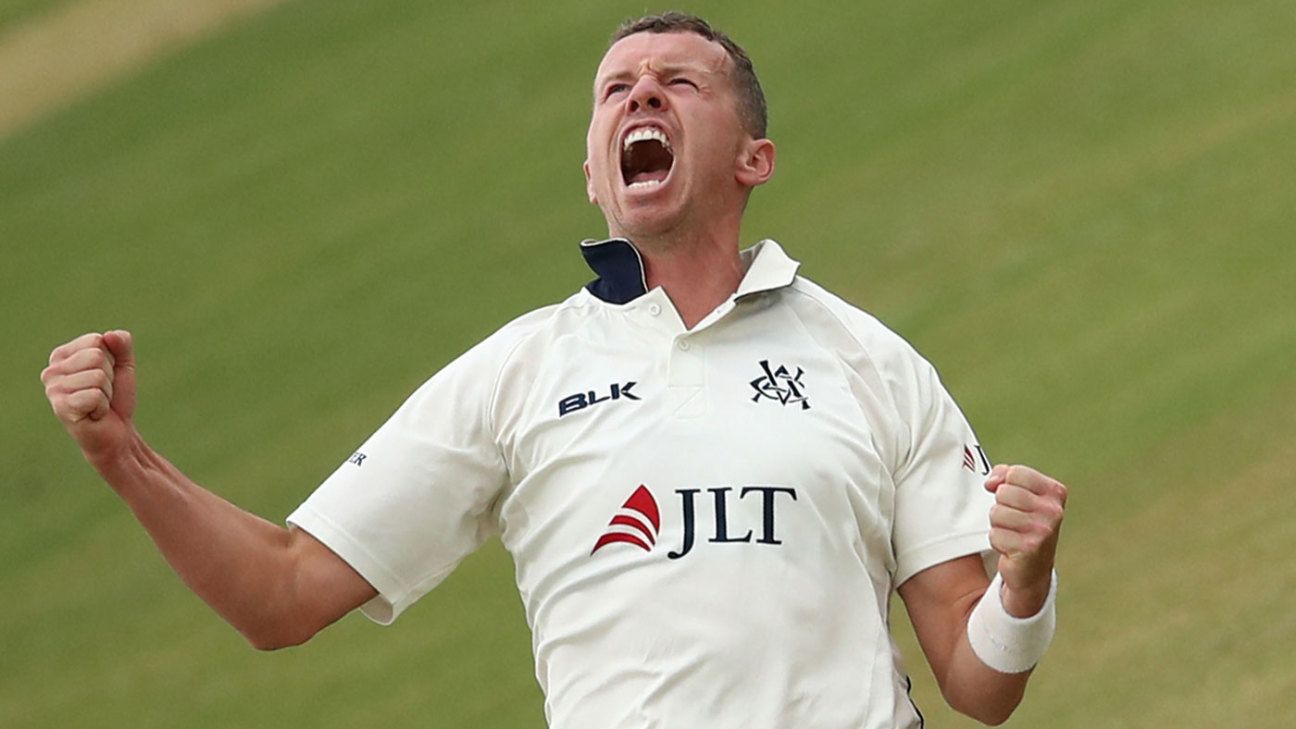 Peter Siddle‘s Test ambitions live on after he was picked out by Australia coach Justin Langer as a potential replacement in the squad for the injured Josh Hazlewood.

Hazlewood will miss the Boxing Day Test against New Zealand after suffering a hamstring strain in his second over in Perth and appears unlikely to be fit for the final Test in Sydney.

James Pattinson, who was ruled out of contention for the opening Test of the season against Pakistan after his code-of-conduct suspension, is the favourite to come into the XI on his home ground at the MCG, and the uncapped Michael Neser is also part of the squad. However, there is likely to be reinforcements added to the squad with an eye on the workloads of Mitchell Starc and Pat Cummins.

“We’ve started to think about it, the obvious one would be Peter Siddle,” Langer said when asked who could come into the squad. “He did a really good job in the Ashes, he’s bowling very well for Victoria and it’s at the MCG where he’s played a lot of cricket. We’ll see what happens the rest of this game and then make a decision.”

Siddle played in three of the Ashes series taking nine wickets but picked up an injury in the early stages of the final match at The Oval which hindered his performance. He is Victoria’s leading wicket-taker in the Sheffield Shield this season with 18 wickets at 19.77.

Having enforced the follow-on in the second Test against Pakistan in Adelaide and now been reduced to two frontline quicks in Perth, Langer was conscious of the strain the bowling attack is under although there will be nine day gap before the Boxing Day Test.

“It always makes you nervous when a bowler goes down,” Langer said. “You always think about the implications for this game but also the cumulative effect of a lot of overs. We also think back to the winter and what’s already been this summer, so they are things you keep in mind. We’ll go through the process and come up with the best solution.

“It’s a shame for Josh; he’s built up so well during the Ashes. I feel for him. Hopefully it’s not too bad. He’s certainly out of Boxing Day and but we’ll have a look for Sydney. We’ll have a look at the end of this Test at how many overs the boys bowled, how long we were in there for the second innings and we’ll make a decision on who the next bowler is.”

With the overs clocking up for the fast bowlers – and the potential for a second spinner to be needed in Sydney – the question of an allrounder has been raised again. However, options are limited with Mitchell Marsh only just beginning his comeback from the broken wrist he suffered when punching the dressing room wall and the highly-rated Cameron Green is unable to bowl due to a stress fracture of his back. Another Western Australia allrounder, Marcus Stoinis, has had promising returns in the Shield with 322 runs at 35.77 and 12 wickets at 27.25 but would appear a long shot.

“There are a few injuries and there’s a great opportunity in Australian cricket for someone to put their hand up and knock really hard on the door to fill that gap,” Langer said. “There’s a lot of talk about allrounders but the truth is, whether it’s a club side, T20 side, Shield side, they all want an allrounder but there aren’t many of them around. And that’s okay, we just find different ways of winning.”

Marsh, who will play the Perth Scorchers’ opening match of the BBL against the Sydney Sixers on Wednesday as a specialist batsman, and is at least a week away from bowling competitively, admitted his wrist may never be 100% again following a nine-week recovery. He also conceded he had tried to rush back too soon.

“It’s been a long nine weeks, so looking forward to it,” Marsh said. “I’ve only had a couple of bowls, so it will take me a while to get going. It’s been slow but it’s feels good now. Injuries in sport you learn to deal with, but when you do it to yourself, it’s a bit different. We knew it was a ten-week injury but I wanted to get back in four. It’s natural as an athlete and I pushed really hard.”