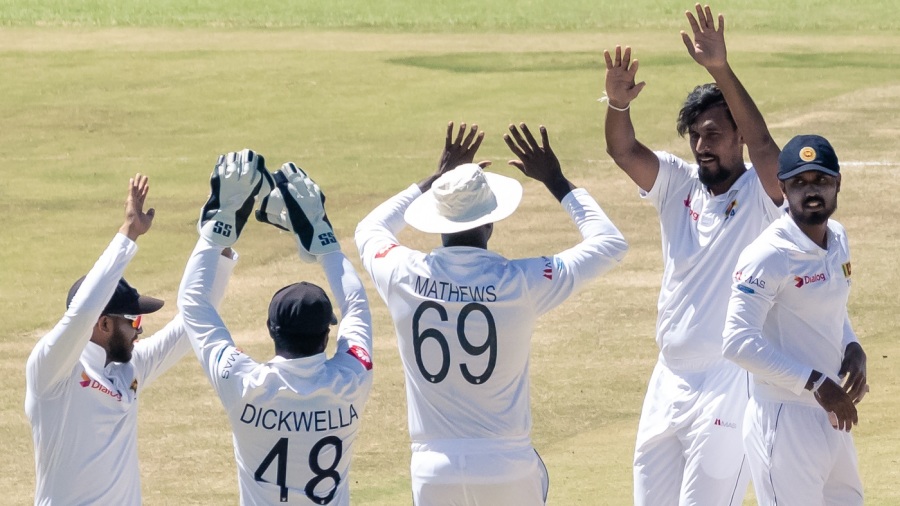 Suranga Lakmal knocked out Zimbabwe’s top three inside the first six overs of day five, but an unbeaten 79-run stand between Brendan Taylor and captain Sean Williams rescued the hosts from the threat of defeat. There remains the possibility that Sri Lanka can win this match, but as Zimbabwe are now only 38 runs shy of making the opposition bat again, a draw has once more become the likeliest outcome in this Test. Taylor ended the session on 38 off 55 balls. Williams was 39 off 77.

Early in the day, Lakmal appeared to be triggering a collapse. He dismissed Prince Masvaure with his second ball of the day, straightening a ball slightly off the seam to take the batsman’s outside edge. Next over, coming around the wicket to debutant left-hander Brian Mudzinganyama, Lakmal jagged a ball back in off the seam, and struck the batsman on the front pad. As Mudzinganyama had shouldered arms, it didn’t matter that he had been hit outside the line of off stump. Umpire Marais Erasmus gave the lbw decision almost immediately. When Craig Ervine fell in Lakmal’s following over, chipping a ball to Dimuth Karunaratne at short midwicket, Zimbabwe had lost three wickets for eight runs.

Although surviving the back end of Lakmal’s six over spell was important, equally vital to the success of the Williams-Taylor stand was the manner in which they neutralised left-arm spinner Lasith Embuldeniya, who had taken a five-wicket haul in the first innings. It was Williams who made the first charge, hitting him for two boundaries behind point, and one through square leg, all in the space of four deliveries in Embuldeniya’s sixth over of the morning. Taylor then struck him for two successive boundaries in the following over.

As the pair attacked Embuldeniya, they did provide half-chances, however. Taylor’s first boundary had in fact been the result of a thick edge that whizzed over the head of a crouched slip. Several overs later, a Williams slog sweep off Embuldeniya went to short midwicket, where the tough chance was put down, reprieving Williams on 25. After Taylor hit two reverse-swept fours roughly midway through the morning, however, Embuldeniya was finally taken out of the attack. His nine overs in the session had cost 57 runs – an economy rate of over 6, though his figures for the innings are slightly better. None of the other bowlers have gone at even three an over.

Kasun Rajitha, who has so far failed to pick up a wicket in this match, bowled a decent spell to finish, slowing the rate of Zimbabwe’s advance. One more good session of batting, though, should just about make Zimbabwe safe in this match.