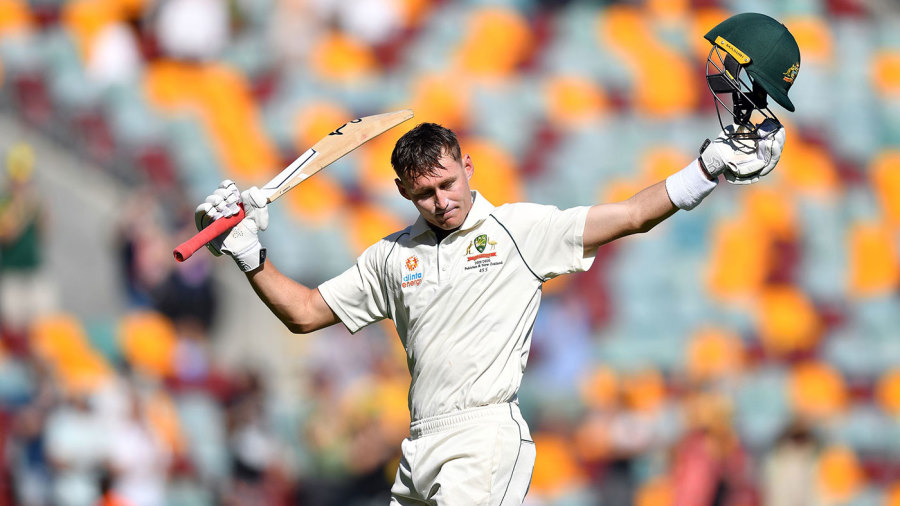 Marnus Labuschagne‘s maiden Test century and highest first-class score, which he narrowly missed converting into a double, followed by an evening surge from the quick bowlers put Australia well on track for victory at the Gabba on Saturday. A lead of 340 would have been overwhelming for Pakistan even before they stumbled to the close on 3 for 64 against Mitchell Starc and Pat Cummins.

Australia ended up losing their last five wickets for 35 but it barely mattered, and gave them the perfect period to bowl in the evening. Starc raced in and struck in his second over when he had Azhar Ali lbw with a bail-trimmer, and then continued Haris Sohail’s poor tour when the left-hander sparred at a short delivery he could have left alone much in the manner of the first innings.

Cummins, who was handed the first new ball for the first time in Australia, was then brought straight back into the attack to target Asad Shafiq and the move worked a treat as he edged to third slip. Shan Masood and Babar Azam did well to survive to the close, Masood coming close to nicking Nathan Lyon to slip in the penultimate over of the day when the umpires’ soft signal was not out.

In January, there was much surprise – and a degree of ridicule – when Labuschagne was elevated to the No. 3 spot, but he will end the year having cemented the role for the foreseeable future. His hundred came from 161 balls with one of his least convincing shots of an innings filled with classy, classical strokeplay, when he edged Shaheen Afridi to third man. His progress continued to be serene until after tea when he steered Afridi to gully and had to haul himself from the crease, acknowledging congratulations from the Pakistan players and the crowd.

Though David Warner could only add three to his overnight score, before becoming Naseem Shah’s maiden Test wicket, and to the almost disbelief of the crowd Steven Smith was bowled by Yasir Shah for 4, Matthew Wade joined Labuschagne in a stand of 110 which kept Australia motoring.

Resuming on 1 for 312, it was Labuschagne who dominated the early scoring as Warner struggled for the fluency of the previous day – adding 3 off 25 balls – as Pakistan finally opted for a sustained around-the-wicket line. In a match that has become an almighty struggle for the visitors, Warner’s dismissal was an absorbing moment as 16-year-old Naseem worked him over from around the wicket before finding his under edge with a rapid short ball (and his foot was behind the line this time).

However, that was Naseem’s only spell of the day as he sent down just four overs before spending the rest of the time grazing in the outfield, while the lead swelled against some unthreatening part-time spin and the expensive Yasir, who became the first bowler to concede over 200 three times in Test cricket.

Yasir did, though, have the satisfaction of claiming Smith for the seventh time when, the ball after Smith had whipped a boundary to the leg side to get off the mark, he played over a very full delivery – again looking for the on side – and was bowled. Yasir knew the stats, signaling seven as he celebrated, leaving Smith with his first single-figure Test score since Newlands when his career was thrown into turmoil. To no-one’s surprise he was spotted in the nets during the lunch break. When Josh Hazlewood later drove a boundary, it meant Smith would have the lowest score of the innings.

While claiming two of the bigger wickets offered solace for Pakistan, the lead was already over 100. With Naseem not returning to the attack, and Yasir unable to stem the runs, no pressure was built on Labuschagne or Wade up to the lunch interval. By then, Labuschagne had the century and Wade was settled.

Pakistan appeared to stop trying to bowl out Australia, giving Haris’s part-time left-arm spin a lengthy outing against defensive fields. Wade helped himself, his half-century including a huge six down the ground off Iftikhar Ahmed, and Labuschagne continued on his pristine progress with one of the shots of the match – a straight drive off Imran Khan – and some delightful deft touches against the spinners to move past 150.

Wade had a hundred for the taking when he edged Haris, the ball bouncing off Mohammad Rizwan’s knee into the gloves. Rizwan then took another excellent catch off Haris when Travis Head could hardly believe he had glanced an edge down the leg side having been gifted the opportunity for one of the more pressure-free Test innings.

After tea, the talk was when, or if, Australia would declare in the evening but Tim Paine bottom-edged a pull that looped to slip against Afridi and after Labuschagne departed the tail was whittled out swiftly. However, the most significant wickets of the final session were still to come.