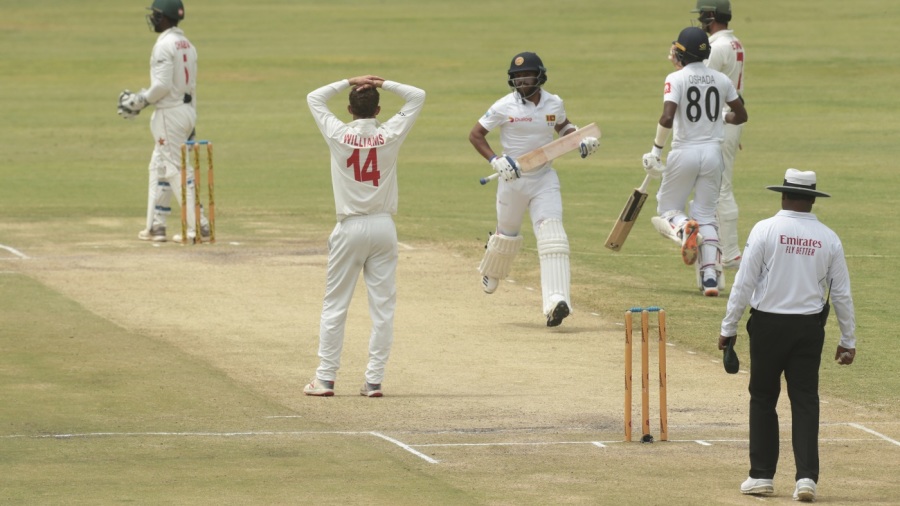 On the fifth morning of the second Test in Harare, Sri Lanka ticked off 105 runs from their target of 361 for the loss of just one wicket. At lunch, Oshada Fernando and Kusal Mendis were at the crease, both on 46, and their partnership 79.

Zimbabwe earlier declared their second innings on 247 for 7 after just one ball today: an uncharacteristic leg-stump half-volley by Suranga Lakmal that Sean Williams flicked over the deep square leg boundary for six.

The shot brought up Williams’ third Test fifty, but more importantly, Zimbabwe got the chance to use the heavy roller once more on a dry Harare deck. The idea presumably being to widen some of the cracks on the pitch, and give their bowlers – Sikandar Raza in particular – a better chance of bowling out a team in the fourth innings of a Test for just the seventh time in their history.

The history books don’t bode too well for Sri Lanka either, with the highest fourth-innings total in Harare being 310 by Zimbabwe in 2002 in a lost cause; the highest successful chase has been 192 by Pakistan in 1998.

For the first half of the morning session, Sri Lanka didn’t look the least bit interested in challenging that record; in a match where they have scarcely gone beyond three runs an over, here they were barely touching two.

Zimbabwe for their part weren’t being overly aggressive with their tactics, sticking more or less to what had worked for them in the first innings – spin at one end, probing seam outside off at the other. Donald Tiripano was miserly as ever, bowling four straight maidens at the start of the innings.

It was this discipline that brought the first breakthrough for Zimbabwe, with Carl Mumba coaxing Dimuth Karunaratne into a false stroke outside off. The batsman tried to pull out at the last moment but not before the ball took the outside edge and went into the wicketkeeper’s gloves.

The period following the wicket was Zimbabwe’s most threatening with both Fernando and Mendis looking uncomfortable against a buoyant home attack. However, in the 24th over Mendis looked to shift gears, picking off Victor Nyauchi for back to back boundaries through midwicket. Fernando joined the party in the next over, taking Williams for three fours – two lofted over mid-on, the third drilled through the covers.

That period had coincided with a change in the tactics from Zimbabwe, the hosts bowling more aggressive lines at the stumps as they looked to force the batsmen to play more.

This brought forth arguably the most intriguing passage of play in the Test, with Mendis and Fernando unafraid to attack when given the chance, and Nyauchi constantly testing them, beating the outside edge on a few occasions and inducing it at other times – twice resulting in boundaries down to third man, with another bouncing just in front of first slip.