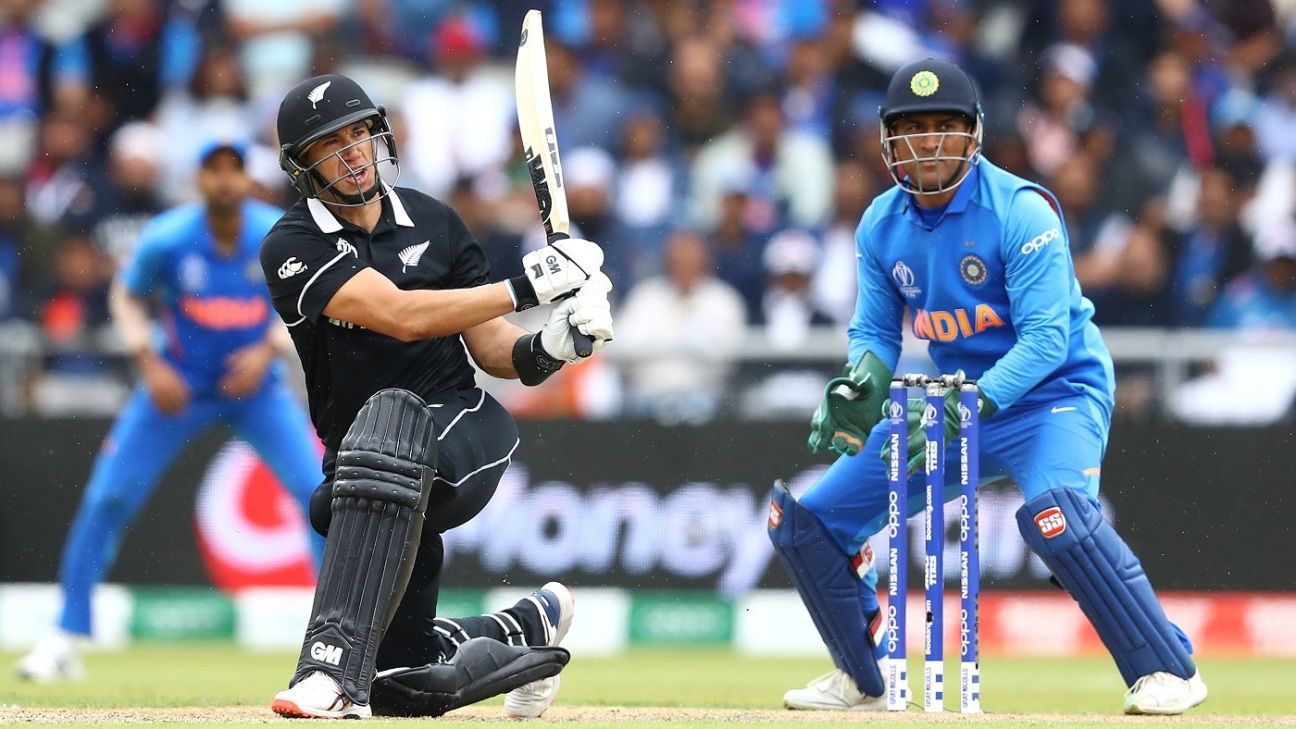 For the longest time – the first day if you like – it did look like New Zealand had fallen behind and India had the edge in their World Cup semi-final at Old Trafford. It turned out that the 239 for 8 they got was 18 runs too many for India, a target that Ross Taylor said his team were quietly confident about. “We thought 240 was a target that we wanted to get to, and be very competitive,” he said.

It was a tricky pitch to bat on right through the 99.3 overs of action, with only Ravindra Jadeja getting the better of the conditions in his 59-ball 77.

“We fell a little bit short (of 240) and we knew we needed early wickets and the way the two opening bowlers set the tone, 240 looked a long way away,” Taylor told newspersons after New Zealand had made the World Cup final for the second edition in a row. “We all knew in ourselves that we deserved to be here and we wanted to … not to prove anyone wrong, but to prove it to ourselves that we were good enough.

Watch on Hotstar (India only): Ross Taylor’s crucial innings of 74

“We were quietly confident, I think. When our backs are against the ball, quite often we have played our best. We talked about that, we have nothing to lose, just go out there and sum up the situation. We have obviously got quite a few level heads, from playing the semi-final and winning at home [in 2015]. We trusted ourselves, we trusted ourselves yesterday – strange to play over two days – but we got the right result.”

With rain pushing the semi-final into the reserve day, a lot of focus was on Taylor, who came into the match on the back of middling form in the tournament. He looked scratchy during his innings in the semi-final too, but he hung in, and was on 67 not out when play was called off on Tuesday. He carried on to 74 and New Zealand got from 211 for 5 to 239 for 8.

“I woke up at 3 o’clock this morning, wondering how I was going to bat these last 23 balls. I texted my wife at about five saying I still can’t go to bed. She said, ‘Oh dear.’ So I just turned my phone off because there were a lot of messages from back home. So in terms of my sleep, I had terrible sleep,” Taylor said with a laugh. “But my main focus, everyone kept saying, ‘come on, get to 250’, my mind set was to get to 240, as Kane and I discussed yesterday. I get to go to sleep now, though.”

Once New Zealand had got their competitive total, the bowlers took over. In 3.1 overs, India were 5 for 3, Rohit Sharma, Virat Kohli and KL Rahul all back in the hut. Man of the match Matt Henry picked up two of the wickets and Trent Boult accounted for Kohli, with the umpire’s lbw decision upheld despite an India review.

“Starting up with the ball, we just wanted to put as much pressure on the opposition as we can. And yeah, to nudge him [Kohli] in the pads and see the finger go up, yeah, it was pretty exciting,” Boult said. “But obviously you’re always nervous if the decision goes upstairs. So it was good to see the bails just falling off. It was good fun.

“I don’t want to say I am a magician against the best player in the world, but yeah, it was nice to see everything line up and I think we saw them at 3 for 6 [5] at one stage. So yeah, we bowled extremely well, it was good pressure from both ends, and it was nice to come out on the right side.”

From 5 for 3, India got to 24 for 4 and then 71 for 5 and 92 for 6 before MS Dhoni and Jadeja added 116 for the seventh wicket, Jadeja, especially, taking the fight to the opposition – he hit four of the six sixes hit in the entire match.

“We know for a fact that if we can get sides three down inside the first ten, and put pressure on the middle order, it’s going to be challenging for anyone,” Boult said. “It was about keeping it simple and nice to put a bit of pressure on those guys. I thought they absorbed it very nicely to get into a position to need 25 [31] off a couple of overs. The end was … it was a great game, great fun, we’re in another final, and we can’t wait.”

The moment that turned a fast-swinging game decisively in New Zealand’s favour was Martin Guptill‘s direct hit to run Dhoni out in the 49th over. With Bhuvneshwar Kumar at the other end, Dhoni wanted to keep the strike and took on Guptill, who threw down the stumps from around the 30-yard circle after running in from the deep. The wicketkeeper had chased after the ball, so it had to be a direct hit, and it was. It was a spot of redemption for Guptill, who has had a horror run with the bat at the World Cup. After hitting 73 not out against Sri Lanka in New Zealand’s first game, he has totalled just 94 runs in eight innings.

“He is down on confidence, we talked about it after he missed out yesterday, and this morning, he was going to go out there do something brilliant,” Taylor said. “Jimmy Neesham’s catch [to send back Dinesh Karthik off Henry] was fantastic, and Dhoni has won from that situation many times. Once we did break that partnership – Jadeja and Dhoni – we weren’t still out of the woods yet, but once we got Dhoni… Brilliant run out, no keeper, if the keeper had been there, he [Dhoni] would have been safe by the time he took the bails off.

“But to have the confidence to do that, in a semi-final… hopefully that’s a bit of luck that he takes from his fielding to his batting and maybe he can have a bit of luck and make the most of it.

“Cricket’s about small margins. When we came in to the huddle, the boys were joking that Gup always misses the stumps. When there’s a run out on, he always missed the stumps,” Taylor smiled. “All those misses over the years, he only hits when there’s nothing to worry about, but he did it now, and we celebrated accordingly and we’re very happy for him.”