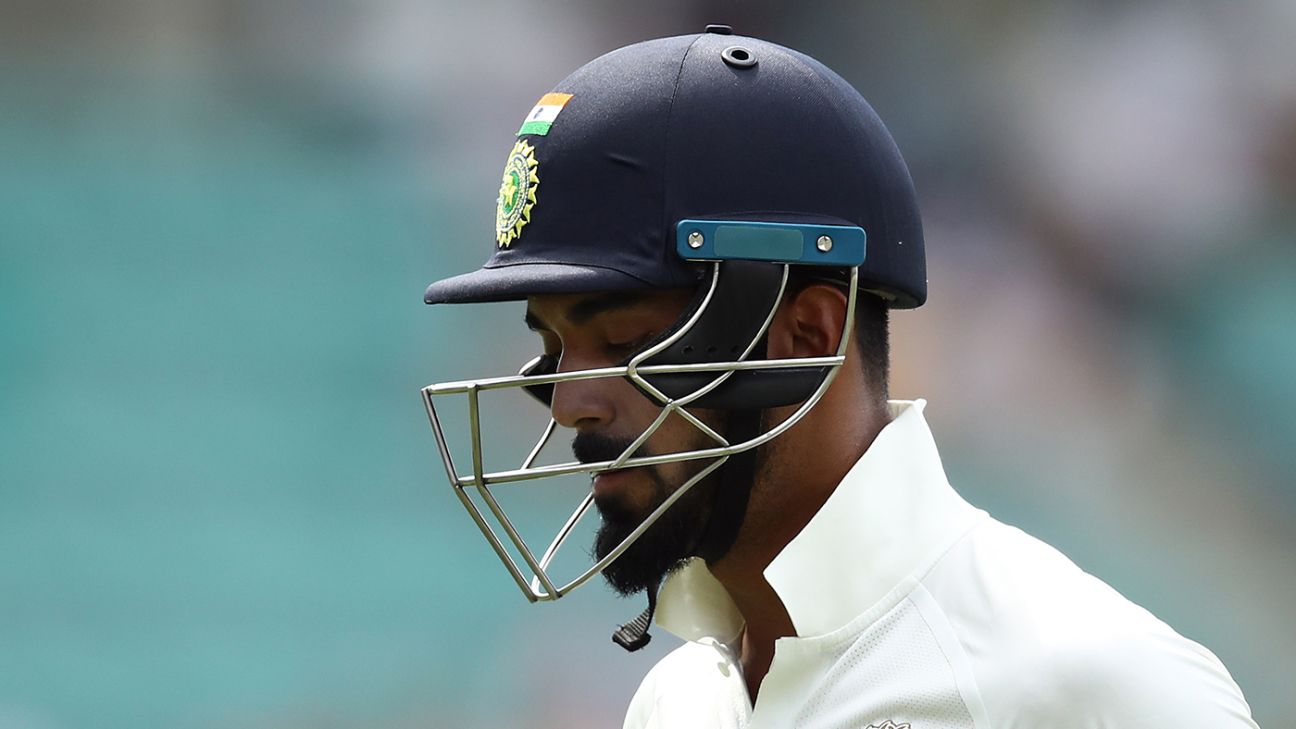 India will start the 2019 World Cup as favourites, according to Rahul Dravid. The India A coach believes India are playing “very good cricket” at the moment, and hoped they could peak at the right moment.

Speaking to journalists during India A’s ongoing home series against England Lions, Dravid said he expected the pitches in England to be flat and unlike those he experienced during the 1999 World Cup in the same country.

“The wickets will be very different compared to 1999, they’ve become very flat,” Dravid said. “I expect it to be a very high-scoring World Cup. We went with India A last year, and 300 was regularly scored, so it’ll be a lot more high-scoring than 1999. We used the Duke’s ball then, now it’s Kookaburra… plus two new balls and field restrictions are there, so we can’t compare the World Cups.

“But India are playing very good cricket and definitely go in as one of the favourites. Hopefully, the boys can peak over the next few months.”

KL Rahul has struggled for form over recent months, but Dravid believed the opener’s ability would help him bounce back. In his last 12 innings, Rahul has gone past fifty just once and has scored only 55 runs in three 50-over games for India A against England Lions.

“I have no doubt that Rahul has quality and ability,” Dravid said. “He’s playing the four-dayers [against the Lions], and he’s proven he can succeed in the international level in all three formats. He’s one player who has hundreds in T20Is, Tests and ODIs so I’m not worried about his form.”

The one-dayers against Lions were also an opportunity for Dravid to test India A’s bench strength, and he was pleased with the contributions of the youngs players drafted in. He also highlighted positives that came from the seniors in the side who remain in contention for a ticket to England.

“Ajinkya [Rahane] (140 in three games) came here and scored runs,” Dravid said. [Hanuma] Vihari, Shreyas Iyer did quite well. The seamers Deepak [Chahar] and Shardul [Thakur] did well. Navdeep [Saini], Avesh Khan and Axar Patel have been excellent. Both the legspinners [Rahul Chahar and Mayank Markande] showed promise and potential, so there were a lot of performances that the selectors can look at and be happy about.

“It was also a younger squad, so it was an opportunity to bring the younger players for the last few games – you saw the likes of Rituraj Gayakwad, Himmat Singh, Siddhesh Lad, Ricky Bhui. They’ve not been part of our set-up, but we want to slowly bring them in because they’ve done well in one-day and Ranji games.”

On the topic of the Ranji Trophy, Dravid said it was inevitable that some India A tours would clash with the country’s premier first-class competition.

“It’s not an easy one to avoid. But in this series, we didn’t pick anyone still playing the Ranji Trophy quarters, semis and finals… so we’ve given importance to that,” Dravid said. “But it’s not easy, we need to balance out the needs of some of the players, we need to develop them and give our players a level and standard higher than domestic cricket. If we don’t challenge our players at a slightly higher level than domestic and first-class cricket, then how can we develop them for international cricket?

“We try to not make them clash, but sometimes the clash is inevitable. Like going to New Zealand [in December 2018], it was a very fruitful exercise to play in those conditions… and if the season clashes, then there’s no way we can balance it out. So yes, we do try to avoid clashes but inevitably it sometimes will happen.”

Dravid was keen to play down the margin of India A’s one-day victory against a solid Lions outfit captained by Ben Duckett. Dravid felt India A had been heavily challenged by the visitors, and that the scoreline simply reflected of who did better in the crunch moments.

“Even though the scoreline reads 4-1, there were many situations where we were challenged and pushed against the wall,” Dravid said. “But we showed some good fighting spirit.

“They pushed us. There were a lot of close games, one wicket or a small phase of play their way and they would’ve won it. It was a lot tighter than 4-1, we just won the key moments, so credit to the boys.”

Dravid’s next job is to oversee India-A’s four-dayers against the Lions, which begin next week. Rahul is part of that squad too, and is expected to take his place at the top of the order. The first game begins on February 7 in Wayanad.