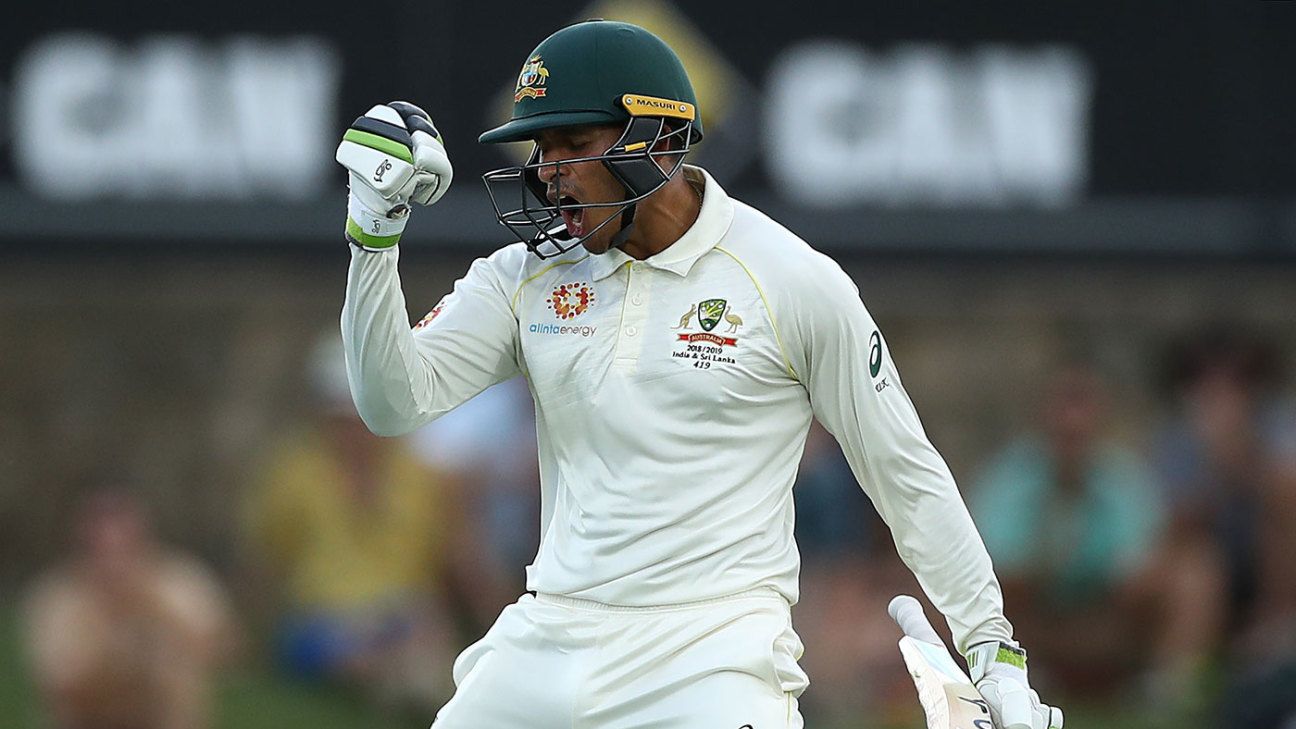 Having finally broken through for a century, Australia’s No. 3 batsman Usman Khawaja has revealed the extent of his mental anguish in a summer where his brother was twice arrested by New South Wales police on charges relating to allegations that he framed a co-worker in a fake terrorism plot.

Back in October, Khawaja seemed set to be the fulcrum of Australia’s batting in the absence of the banned Steven Smith and David Warner, making a magnificent 141 to help Tim Paine’s team save the Dubai Test against Pakistan. However he suffered a knee injury in warm-ups during the Abu Dhabi Test and spent six weeks out of action, losing rhythm and momentum before the home series against India.

In the days before the first Test in Adelaide, news broke of his brother Arsalan Khawaja’s arrest, and the story reared again when Arsalan was arrested a second time for breaching bail conditions in the middle of the Boxing Day Test in Melbourne in late December. Usman Khawaja’s struggle to make the most of a series of starts against India was compounded as low scores mounted, and reached a feverish pitch when he made a duck in the first innings of the Canberra Test.

A century in the third innings with Australia already enjoying a huge lead was nothing like as impactful as the Dubai innings had been, but Khawaja’s celebration indicated the release of plenty of tension, something he spoke frankly about after the close of play. “Being around, getting lots of starts during the summer was tough, I’ve had a tough summer, I’ve had a lot of stuff going on off the field, which has made things a lot tougher,” Khawaja said.

“It’s just been really nice to have my wife Rachel with me for the majority of the tours and she’s been awesome, just to have her around and to go and travel with me, she’s been my rock throughout the whole thing. It’s been tough, it’s something you don’t expect to happen. My family’s very close to me and I’m very close to my family, so at some level yeah I think it made it tougher to go out and concentrate and execute my skills and at the same time while I was playing cricket you sort of forget about everything because you’re only concentrating on cricket.

“But it was very taxing, it has been very taxing mentally, and that’s why Rachel has been great, being around and trying to take my mind off things. Feeling a lot better now than I was probably a month or two ago, but its’ been a tough couple of months off the field.”

After working tremendously hard for the new coach Justin Langer to lose weight and be in the best fitness of his career, Khawaja faced significant issues both physical and mental, underlining his belief that there is no use thinking too far ahead in cricket or life. “It was [hard] I guess when I did come back. I still felt alright, [but] I felt like I lost a bit of momentum there, those six weeks I was out, it can happen,” he said of the knee injury.

“Cricket’s one of those games where you can never look too far ahead and you can never get too far ahead of yourself because it bites you in the backside so quickly. You’ve got to keep your head down, worry about the next day. If you start looking too far ahead of yourself, it can really change quickly. As a team, I was really happy last game that we won. I didn’t contribute, I felt like I was batting really well and then chopped on and we won the game, it was awesome. We lost a couple of games against India, which always hurt. For me and the team moving forward, I was just really happy with the win. The way the guys set up the first innings was frustrating for me as an individual.

“Then to see the other guys, KP [Kurtis Patterson] and [Travis] Heady get their first hundred, I know that feeling, it’s the best feeling ever. I was so happy for both of them, then to see Joey [Burns] back in the team, who I’m pretty good mates with, it made a pretty crappy day for me [scoring a duck in the first innings but] pretty good to see those guys set up that game. When they did that you know you’re in with a chance to win another Test match. There’s no feeling like winning a Test match. Getting a hundred then hopefully setting up a game we can hopefully win is the ultimate feeling for the team and yourself.”

“To see the other guys, KP [Kurtis Patterson] and [Travis] Heady get their first hundred, I know that feeling, it’s the best feeling ever”

Khawaja’s struggles for big scores this summer have led to plenty of criticism, not least from the former captain Mark Taylor, who noted in the wake of his first-innings dismissal that “I’m not sure he’s taken himself to the next level of becoming a senior player”. The less febrile atmosphere of the third innings, even as Sri Lanka’s wicketkeeper Niroshan Dickwella made repeated attempts to distract him, allowed Khawaja to start to rebuild confidence and form in a year when the World Cup and the Ashes both loom. An early skied hook shot that fell safely also provided some much needed good fortune.

“I think so, you always need a bit of luck in this game,” Khawaja said. “I was just out there trying to score runs for the team. I wasn’t worried about myself even when Dickwella was getting into me, I couldn’t care less really, I was just trying to get us in a [good] position, we knew we had so many runs on the board courtesy of all the guys who batted in the first innings. It takes a bit of pressure off you in the second innings and we knew we were going to bowl at some stage tonight.

“You definitely need luck in this game, sometimes you get it, sometimes you don’t, but you’ve still got to bowl well, bat well, field well. It’s a hundred for Australia so it meant a lot. It wasn’t fun getting a duck first innings and feeling like you let your team down a little bit at the start because we knew it was going to be hard and then it was really nice to see the other guys get runs but at the same time I knew I missed out on a few runs there too. So to get runs there and set this game up for the bowlers hopefully to finish up tomorrow, looking forward to it.”