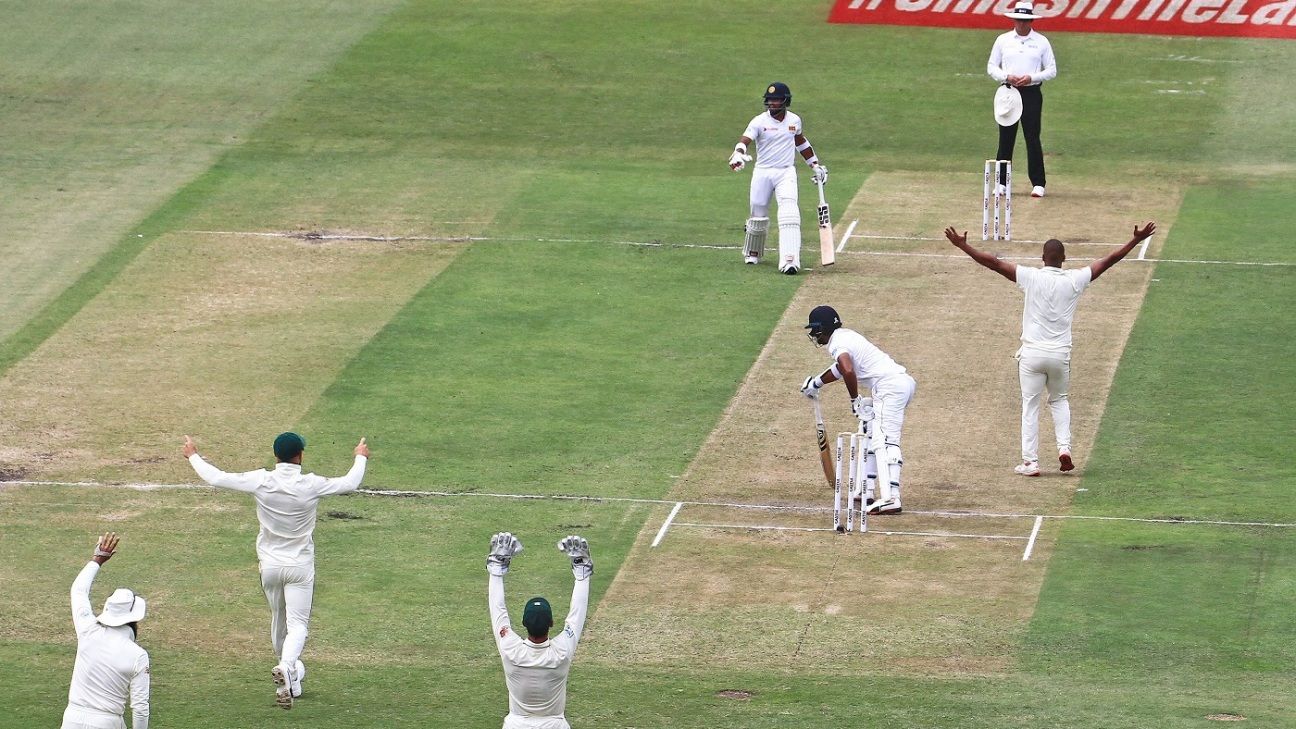 South Africa are ranked No. 2 in Tests, have the most fearsome phalanx of quicks on the planet, a serviceable top order, and are, in general, an outstanding fielding side. Despite a regular loss of wickets late on day two at Kingsmead, they have imposed themselves on Sri Lanka, and have achieved a strong position in the match.

This is roughly how this Test was supposed to go, so no real surprises, right? Except maybe a minor one. South Africa’s dominance has been achieved without significant bowling intervention from left-arm spinner Keshav Maharaj. On his home ground – the most spin-friendly Test venue in the country – Maharaj’s bowling has largely been irrelevant in the first innings. Compare this to the last time Kingsmead hosted a game. Maharaj bowled 33.4 first-innings overs, and took 5 for 123.

It’s no big deal in the context of South Africa’s home summer, because it was performing quicks that have kept Maharaj out of the Test XI for two matches against Pakistan, and performing quicks who trussed Sri Lanka up for 191 between them and effectively made Maharaj surplus to requirements.

But that is only in the context of the home summer, in which South Africa have been desperate to remind everyone just how good they are, following that 2-0 away thrashing in Sri Lanka.

There is, perhaps, also an unsaid undertone of retribution in this particular series. “Yah, you can beat us in your dustbowls, but check us back in our own patch. We’ll show you what we’re really all about over there.” In fact, while South Africa had been in Sri Lanka last year, Faf du Plessis had spoken of reciprocating Sri Lanka’s “streetsmart” tactics, when South Asian teams next toured them.

So instead of a regular Kingsmead surface – the kind on which Maharaj might have been needed for more than three overs in the first innings – what South Africa had requested was pace, bounce, and if possible, movement. What they got was a surface on which even Sri Lanka’s vastly under-strength seam attack could dismiss them for 235. A track on which 19 wickets have fallen to fast bowling on the first two days, with reverse swing never having to come into the reckoning.

This, into an important year for South Africa, on the Test front. They have a three-Test series in India coming up in October, where Maharaj will clearly be required. Have South Africa done enough to develop their promising young spinner, given they have requested uniformly fast-and-bouncy tracks over the last few months? Probably not.

That India series will also be South Africa’s first taste of the World Test Championship – a four-year league that rewards away victories. Though it may be a surprise to some, Maharaj has actually been South Africa’s best bowler away from home since 2016 (against the top nine teams), sporting an average of 26.3. It is not just in Asia that he stands to be a force – the more he plays, the better chance there is he will trouble batsmen in England and Australia as well.

If there was a need for a cautionary tale – a reminder that of the danger that lays in ordering uniform tracks – South Africa need only look at their present opposition. Sri Lanka have largely refused to field more than one frontline seam bowler at home since roughly mid-2016, because they believed rank turners to be their surest route to victory. That strategy has not been altogether unfruitful. In 2016 they whitewashed Australia – a team they almost never beat – and then last year, they of course pummelled South Africa as well.

But look at them now. They are in the middle of a sequence of terrible away series, having lost three of four Tests on the road. Overall their team is in more disarray than ever. Made-to-order pitches are great for short-term results, but it has also prevented Sri Lanka from developing the promising young quicks in their own ranks. Kasun Rajitha and Lahiru Kumara had starred in a Test win in Barbados in June last year, then didn’t play a Test again until December, when the next away tour came around. Unsurprisingly, they were both rusty in those New Zealand Tests, and had added no new skills to their bowling during the layoff.

If this sounds like nitpicking, that is because it probably is. South Africa are an excellent team. They will almost certainly be among the contenders for that World Test Championship crown. But they are, presently, in the grip of some serious pace worship – a philosophy that is not without its rewards. But in the long term, giving their spinner as much Test exposure as possible, may prove more rewarding.