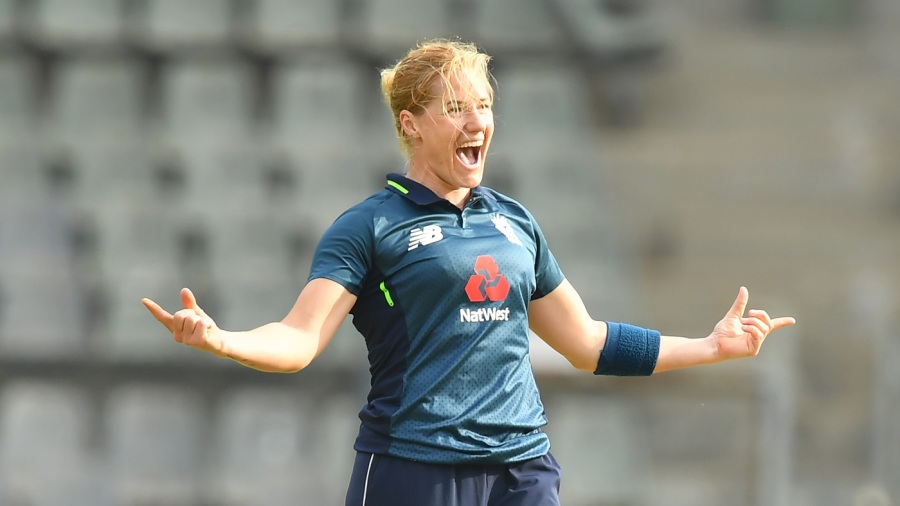 In a tale of two lower-order fightbacks, England prevailed by two wickets to pocket their first championship points on their tour of India. For the hosts, this was another trophy in the bag, allowing them to build on their ODI success in New Zealand.

On a comeback after missing the World T20 late last year, Katherine Brunt‘s incisions resulted in India losing 6 for 21 at one stage, slipping from a comfortable 129 for 1. Brunt took four of those wickets in the course of a four-over second spell, having already dismissed the opener Jemimah Rodrigues with the new ball.

Of her wickets, Smriti Mandhana‘s may have been a touch lucky, the India vice-captain pulling a long-hop straight to deep midwicket for 66, the highest score of India’s innings. Punam Raut, also on a comeback, made 56 before Brunt bowled her with an in-ducker.

Mona Meshram bagged her second duck of the series when she played all around a full delivery, while Mithali Raj got a thick inside edge onto the pad, only to be caught smartly by Sarah Taylor. The more India appeared to try and strengthen their middle order, the more they unravelled.

It took a stodgy 47-run stand between Shikha Pandey and Deepti Sharma to lift them to 205 for 8. Brunt finished with 5 for 28.

On each of their two previous outings, England struggled on the red-soil Wankhede surfaces. In the final ODI too, there was the familiar early collapse, this time against the seam of Jhulan Goswami, who sent back the top three as England slipped to 49 for 5.

There was still plenty of spin to negotiate for England; where there was fizz and turn from Ekta Bisht previously, they had Rajeshwari Gayakwad’s slow flight and loop to contend with this time. But while Gayakwad was economical, conceding just 41 off her full quota, Heather Knight and Danielle Wyatt negated her threat and provided England a calming influence.

Wyatt walked in at No. 7 and immediately made run accumulation look easy, leaving her imprint on the tour after sitting out the first two ODIs. Picked only because of an injury to Sophie Ecclestone, Wyatt milked runs steadily to make an 82-ball 56, along the way adding 69 with her captain Knight.

The game was still India’s to lose when Knight fell, but they let the pressure slip. Georgia Elwiss and Wyatt added a further 56 to bring the target within touching distance. When Wyatt dragged a slower ball from Pandey to long-on with England needing 32, the game was back in the balance. One run later, India could have had their eighth wicket when Elwiss got a leading edge to Pandey’s slower delivery, only for the bowler to fluff a straightforward offering on her follow-through.

Elwiss went on to see the chase home and remained unbeaten on 33. Brunt, who would have liked to cool off after an intense spell, made 18 crucial runs to take England to within two runs of victory. Anya Shrubsole then walloped a boundary to complete the formalities.