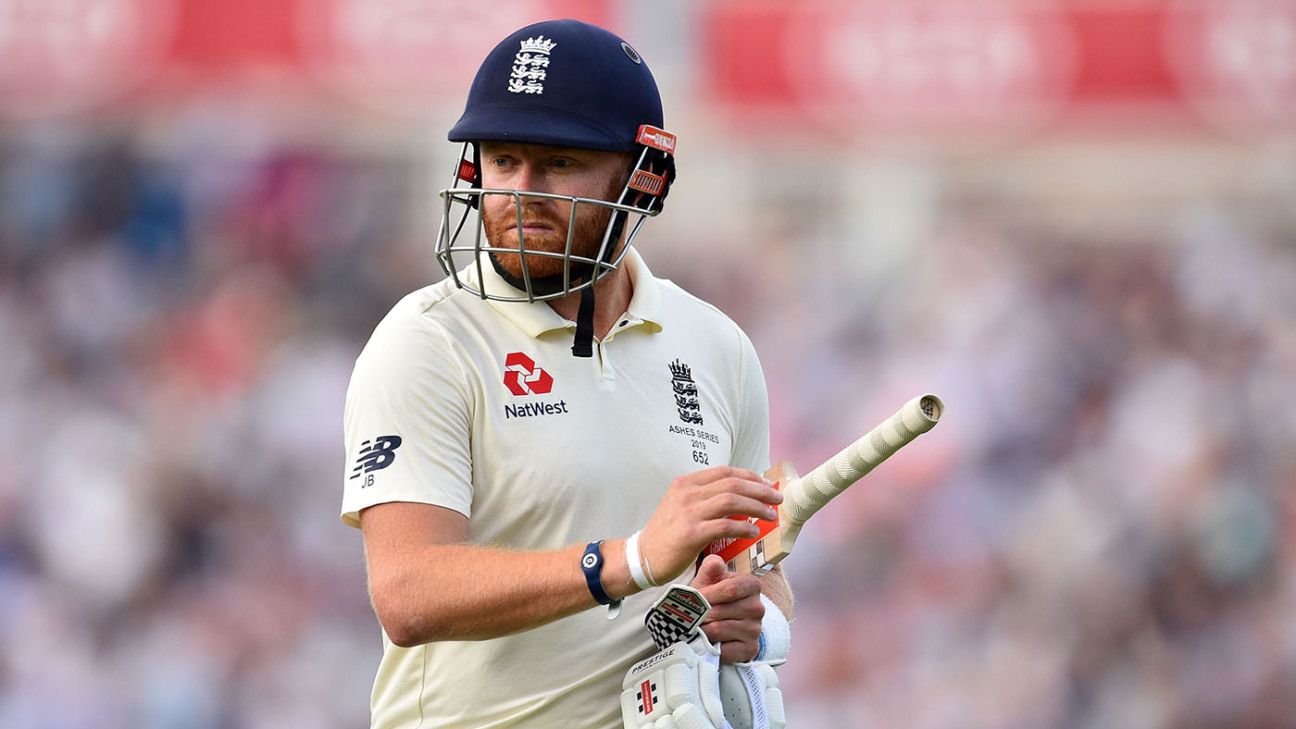 Jonny Bairstow hopes a prolific T20I series in New Zealand can help him regain a place in England’s Test side.

Bairstow was dropped from the Test squad for the tour of New Zealand after a disappointing run of form which has seen him average 18 since February. But he has retained his place in the T20 side, some of whom – along with new England head coach Chris Silverwood – arrived in New Zealand on Tuesday while the rest were in transit.

Bairstow hopes he can impress sufficiently to win a recall for the Test tour of South Africa which starts in December and he says he doesn’t mind whether the recall comes as a specialist batsman or as a keeper. Jos Buttler, who averaged only fractionally more than Bairstow in the Ashes (24.70 compared to 23.77), has been given the gloves for the New Zealand Test tour.

“We saw Jason Roy picked for The Ashes off the back of ODIs and Jos Buttler came back into the Test team in 2018 after impressing in the IPL.

“I don’t mind if I keep. I just want to return to the squad to try and get back in the side. Wherever that may be hopefully there’s an opportunity that arises and hopefully I’ll be able to take that when it does.

“The T20s will be a great craic. New Zealand is an unbelievable place to tour and play cricket. There are some new guys in the squad and it will be good to get to know them.”

In truth, there has rarely been much issue with Bairstow’s limited-overs form. He averaged 48.36 during the World Cup, including two centuries and two half-centuries, with only Joe Root scoring more runs for England in the tournament. But he accepts that concentrating on the shorter format for much of 2019 may have been “potentially difficult” going into the Test against Ireland – where Bairstow made a pair – and then the Ashes. Notably, Bairstow has been bowled 32 times in his 69-match Test career; a higher proportion than any other Test batsman this century.

“We didn’t play red-ball cricket for the best part of five months,” Bairstow said. “From the Caribbean tour to July I think it was and then not having any county games to get back into was potentially difficult.

“You could see that some people had played more red ball cricket than others throughout the Ashes series and that’s on both sides. Marnus Labuschagne and Cameron Bancroft came into it after having played county cricket. It was bound to happen with scheduling a World Cup and Ashes in the same summer.”

Bairstow is also determined to use his time off constructively. While his former teammates are playing the Test series in New Zealand, he will be working hard on his game in the hope of replicating the success he enjoyed when he was left out after the Ashes tour of 2013-14. Returning to the England side with a strikingly higher backlift, he enjoyed a run of form which at one stage saw him score three centuries in six Tests and average 71.23 across a dozen Tests.

“I’m excited about having some time to work on things without necessarily being watched on telly or having my game stripped down,” Bairstow said. “With the busy schedule, I’ve not been able to do that for four or five years.

“I’ll get myself in a peak physical, mental and technical state so I can go from the T20s into two or three weeks’ solid work in England working on my game. I’ve already had some net sessions in the past week and they have gone well.

“To refresh and re-focus is important. I want to represent England in all formats. I’ll work hard in the time I have and hopefully impress enough to be in contention for South Africa.”

England play their first of two T20 warm-up matches in Lincoln on Sunday. The five-match T20I series starts in Christchurch on November 1.