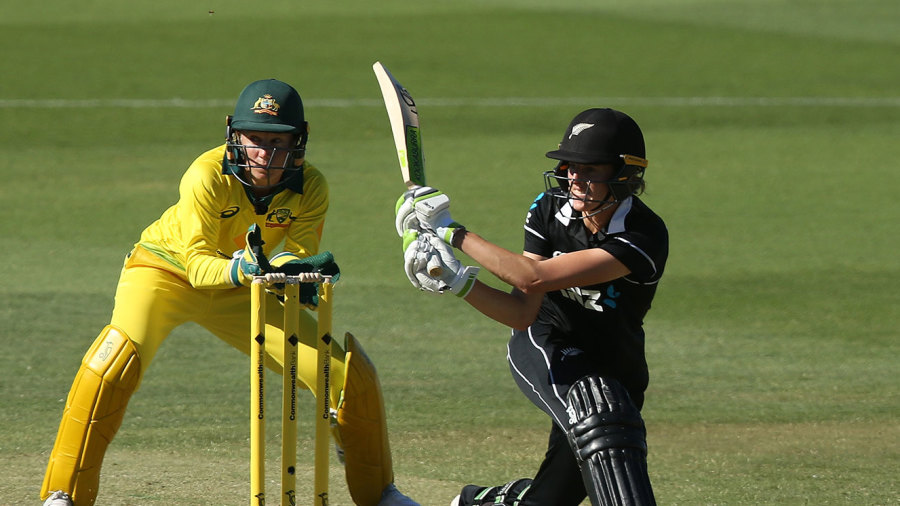 Australia clung on for a five-run victory in the opening match of the Rose Bowl series as New Zealand let slip a golden opportunity despite Amy Satterthwaite‘s 92.

Jess Jonassen enjoyed an impressive return to the Australia side with crucial lower-oder runs and then returns of 4 for 43 as she helped close out the game at the death when New Zealand failed to hold their nerve.

A stand of 99 between Satterthwaite and Katie Perkins had put New Zealand well on track to chase 242, but after Perkins gave Jonassen a return catch they lost their way with Australia smartly taking the pace off the ball.

Satterthwaite, who lost her fluency during the closing stages, could only watch from the non-striker’s end as the match slipped away. That will have been a relief to Alyssa Healy, who missed a stumping chance Satterthwaite had offered on 85 before she became Jonassen’s fourth wicket when she lofted to cover in the penultimate over.

Australia did well to claim the contest in the end – their depth and belief coming to the fore – but they were short of their best for significant parts of the match.

Rachael Haynes top-scored with a well-compiled 67 after the trio of Healy, Meg Lanning and Ellyse Perry fell for a combined score of 16. New Zealand, whose seamers were especially impressive, chipped away throughout and it needed useful innings from Ash Gardner and Jonassen to haul Australia over 200.

On a well-grassed surface, there was considerable assistance early on after New Zealand had put Australia in to bat. Healy has carried all before her this season, recently collecting a bag of honours at the Australian Cricket Awards, but there was little she could do against a terrific delivery from Lea Tahuhu, which straightened to take off stump.

Rosemary Mair, making her ODI debut, then claimed a maiden scalp to remember, but had her captain to thank for it – Lanning aimed to force a shot off the back foot and Satterthwaite pulled off a stunning one-handed grab, diving full length at slip.

When Perry played a loose drive at Sophie Devine, Australia were 3 for 58 in the 15th over and in need of some significant stabilising. Haynes, filling the opening position created by Nicole Bolton’s absence, and Beth Mooney went about it calmly, Haynes bringing up her half-century from 61 balls in an innings highlighted by some strong off-side shots, before a googly from Amelia Kerr took Mooney’s outside edge.

Haynes became Mair’s second wicket and when Elyse Villani departed to Kerr, Australia were 6 for 154 with more than 16 overs remaining. Gardner and Jonassen responded positively, Gardner striking the one six of the innings, before Devine claimed two well-deserved wickets to finish with 3 for 32.

New Zealand’s chase started in rocky fashion, however, when Devine cut Perry’s first delivery to backward point and Suzie Bates was lbw to Megan Schutt. Then came a classy piece of bowling from Perry, who followed two outswingers against Lauren Down with the nip-backer which beat the inside edge and took off stump.

For a side twice bowled out for 200 in the recent ODIs against India, the target looked a considerable way off for New Zealand, but Satterthwaite and Katie Martin started the fightback. Australia’s bowling was starting to be milked reasonably comfortably when legspinner Georgie Wareham bowled Martin round her legs sweeping.

The chase shifted in the 32nd over when Perry was taken for 13 including a no-ball and a wide, and all appeared under control as Satterthwaite and Perkins collected boundaries to keep the asking rate under a run-a-ball, but the game changed when Perkins bunted the ball back to Jonassen.

Kerr was intent on hitting out when something more measured might have been wise as she and Leigh Kasperek were bowled in consecutive deliveries by Jonassen. The final over started with 18 needed, and the two boundaries they scored only made the loss even more agonising for New Zealand.