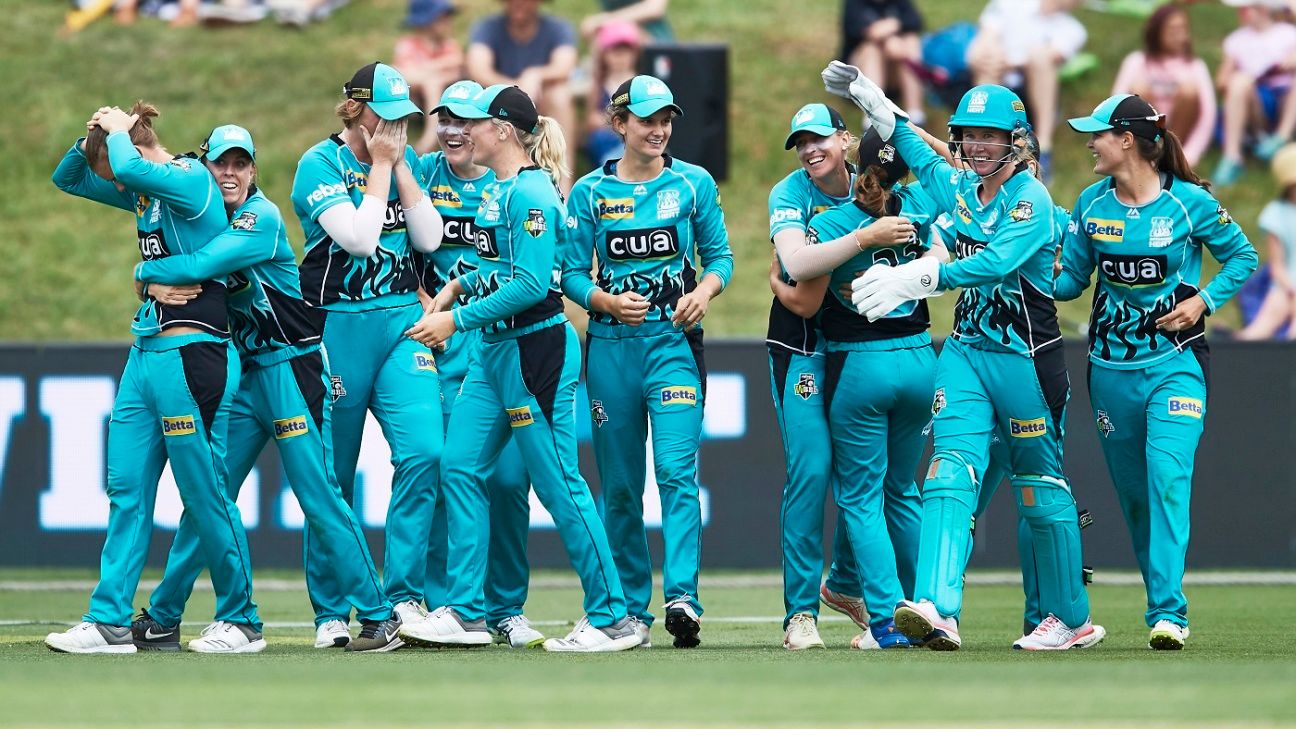 Brisbane Heat topped Sydney Thunder in a thriller to enter their first-ever WBBL finals. The match came down to the final ball and could have gone the other way, but for a brilliant catch on the deep square leg boundary by Haidee Birkett to dismiss Nicola Carey to secure a four-run win.

Heat’s bowlers had stifled the chase on a sluggish pitch, but a late flurry of runs from Carey took them within touching distance. Carey, who had powerfully slog-swept left-arm spinner Jemma Barsby over deep square in the precious over attempted the same shot, off Jess Jonassen. Birkett, sprinting from deep backward square, snatched the ball on the move to send the Heat players into rapturous celebrations.

Set 141 for victory, Thunder had looked solid early in the chase, despite losing the dangerous Rachael Haynes in the first over. This was down to Rachel Priest’s blistering 33-ball 44. But Heat kept chipping away at the wickets and used their variations well to strangle the Thunder’s middle order. Alex Blackwell steadied the chase and was just beginning her late inning launch when she holed out to long-on off Jemma Barsby, who took 3 for 23 and was, at one stage, on a hat-trick.

Sent into bat, Heat lost three early wickets: Grace Harris holed out to a full toss from Stafanie Taylor, while Beth Mooney and Kirby Short both found leading edges. With the ball stopping in the pitch, sweeps and slog sweeps were employed well by Sammy Jo Johnson, whose 37-run partnership with Jonassen led the recovery. When Johnson was caught at long-on off by Naomi Stalenberg – one of her three catches – Laura Harris chimed in with 32 off 25 to give the Heat a total they could defend.

But Johnson – in a brilliant all round performance – hit the deck hard and successfully cramped Haynes into bunting the ball to a diving Dooley to be run out second ball. Naomi Stalenberg put on a sprightly 56-run partnership with Priest until she was fooled by Barsby’s dip and turn and was bowled through the gate.

Priest, who had seen Johnson smash the ball over the leg side, employed the same tactic, smiting five boundaries and two sixes, but the shot that brought her success was also her undoing. She was caught at deep square leg by Birkett.

The squeeze was on, led by Johnson – who conceded just 12 runs off her 4 overs – and Grace Harris, whose commentary on the Channel 7 player mic was the source for much entertainment. Her laconic insights during the over when she dropped a caught and bowled chance and then bowled a charging Stafanie Taylor were a highlight in a match that had plenty.

Just as the Thunder seemed to have succumbed to the strangle, Carey lifted a gear. When she dropped to one knee in the penultimate over and powerfully flat-batted the ball for six the great escape seemed eminently possible. In the end it took a superb piece of fielding to deny her.