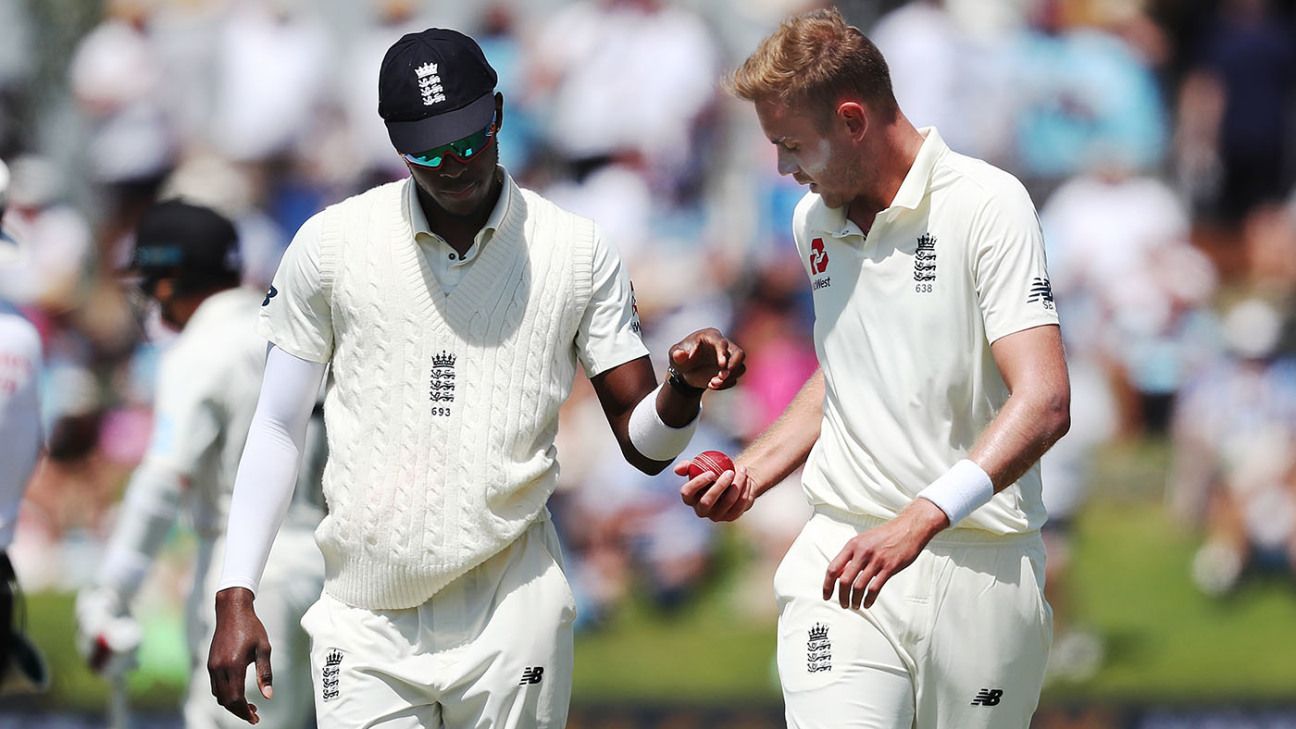 Jofra Archer has been encouraged to keep a sense of perspective after a dispiriting tour of New Zealand. Archer finished with 1 for 75 in the first innings at Hamilton, taking his series tally to two wickets at 91.00 apiece.

Archer arrived in the country with a big reputation having enjoyed an outstanding start to his international career, but he has found the combination of the docile pitches and unresponsive ball hard to overcome.

But Stuart Broad, his vastly experienced colleague, urged him to reflect on what he has already achieved in his international career and look forward to the prospect of more helpful surfaces in South Africa, where England play their next Test series.

“Jofra has been a bit disappointed because he’s used to making things happen in cricket,” Broad said. “Sometimes, away from home, the game isn’t played at the speed we’re used to in England. The excitement’s not there, the pace isn’t there and the nip’s not there. These pitches are tough work to get wickets on. You can’t expect to come and get five for 30 on pitches like this. I don’t think the Kookaburra ball is his best friend at the minute.

“But it will be when he realises that not every away pitch is like this. I’m just encouraging him to look forward to South Africa. That’s a better place to bowl.”

Archer’s impact at international level has been so dramatic that it is possible people forget how inexperienced he is. Before this tour, for example, he had played only 32 first-class games and he had never bowled with a Kookaburra ball. His first four Tests came in England, on relatively helpful surfaces and with a Dukes ball, and saw him claim 22 wickets at a cost of 20.27 apiece.

Now Broad hopes to remind him of everything he has achieved in such a short space of time and persuade him to accept that such barren patches are inevitable.

“He’s never experienced anything like it,” Broad said. “He’s played a lot of first-class Division Two cricket with the games in fast-forward. He said at Mount Maunganui that he’d never gone through a day without taking a wicket, but he’s still so new to this level of cricket.

“He still judges himself on the wickets he takes but once he gets past 50 Tests he won’t do that, he’ll play on too many flat ones. His economy rate has been really good. His areas have been great.

“I said to him today when he had a none-for, you’d take your World Cup and Ashes for a couple of games without wickets. You can’t get a six-for every time you step on the field. Just lower your expectations, enjoy being here and speak to someone in England who is cold in November. You’re playing cricket in New Zealand – it’s good.”