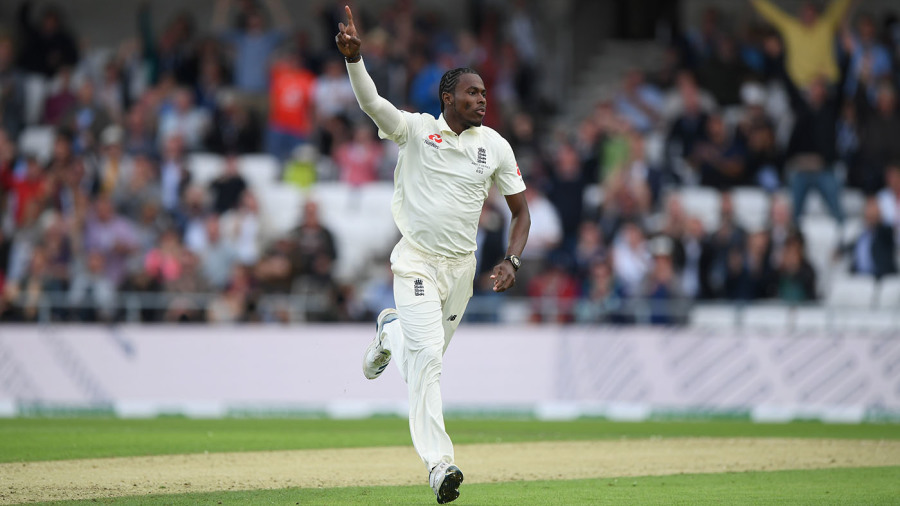 Anyone watching his debut at Lord’s was left in little doubt as to what Jofra Archer brings to this England side, but his six-wicket haul rammed the message home all the same as Australia were bowled out for 179 on the opening day of the third Test at Headingley.

It was a case of another day, another intiguing chaper in this Ashes contest as David Warner found some form and Marnus Labuschagne – only in the side because Steven Smith is still suffering the effects of being concussed by Archer – top scored for Australia for the second time in as many innings. But Archer, playing just his second Test, had the last word, his 6 for 45 putting England on top.

Despite rain and bad light forcing a delayed start and long, frustrating stretches without any play at all, there were enough twists and turns amid the action to ensure it was in keeping with the rest of the series so far.

England, keen to make the most Joe Root’s decision to bowl in overcast conditions upon winning the toss and having already reduced the tourists to 25 for 2, were stymied first by the weather they had hoped would work in their favour and then by the stubborn pairing of Warner and Labuschagne.

But just as it looked like Warner might dig in after rediscovering some much-needed form after breaking into double figures for the first time in five innings this series and then having an lbw decision rightfully overturned, he exited, the first in a flurry of three wickets that had England back in control as Australia slid from 136 for 2 to 139 for 5 in the space of 15 balls.

That became 162 for 6 thanks to Root’s deft use of the DRS when Tim Paine was given not out lbw on 11 to a Chris Woakes inswinger with replays showing the ball hit the knee roll in line and would have taken the top of leg stump.

But, as in the second Test, when he came in as Smith’s concussion replacement and scored 59, Labuschagne produced another composed innings of 74.

After play started 70 minutes late, Archer struck in the fouth over of the match when he had Marcus Harris – in the side for Cameron Bancroft who was dropped after scores of 8, 7, 13 and 16 in the series so far – caught behind by Jonny Bairstow for 8. The players immediately followed Harris off the field as the rain returned.

Stuart Broad had Usman Khawaja out just as cheaply early in the second session, again caught behind after a confident and ultimately successful review by Root. The England players looked rather dubious when play was halted as light rain began to fall again with Warner on 18 and Labuschagne yet to score and they were even slower to leave when bad light was called 3.1 overs into the resumption.

An elongated tea break was followed, however, by a break in the weather, which is forecast to be fine for the coming days. That did not, however, lift England’s mood as they became bogged down in a tenacious partnership between Warner and Labushcagne, which yielded 111 runs.

Warner reached his half-century off 79 balls with a four off Woakes and booing could be heard as the batsman – still finding his way back into the game following his year-long ball-tampering ban – acknowledged the crowd, which also offered warm applause as his wife and two of his three young daughters cheered him on from the stands.

Warner was on 61 and mighty swift to call for a review when he was given out caught behind off Broad with UltraEdge revealing he had not hit the ball. He failed to add to his score, though, before Archer found the edge in the next over with a 90mph ball and Bairstow took the catch.

Far from the onslaught of speed and aggression he showed with such devastating effect at Lord’s Archer bowled in more controlled spells with no damage whatsoever to his figures. He still produced speed when he needed to, as Warner discovered, and enough bounce to keep the batsmen on their toes. He bowled the most overs with 17.1, having sent down 44 overs of venom in the prevoius match, which ended just three days ago.

Broad, too, caused Australia some problems, answering Labuchagne’s fifty celebration with a ball to the groin that took the batsman several minutes to recover from and taking 2 for 32 from his 14 overs, including the dismissal of Travis Head for a duck with a gem of a delivery that crisply struck the top of off stump, the second wicket of Australia’s mini-collapse.

Matthew Wade followed, also for a duck, after an Archer delivery struck him on the glove and thigh pad before dropping behind him and rolling gently into the base of leg stump.

Labuschagne carried on as Paine, James Pattinson and Pat Cummins fell – the latter two more Archer fodder – before his bizarre dismissal, lbw to a dipping Ben Stokes full toss that he reviewed to find the ball would have smashed into the centre of middle stump.

Nathan Lyon was the last man out, and Archer’s sixth wicket, lbw to a full, straight ball that was hitting leg stump and which allowed England to claim the day.