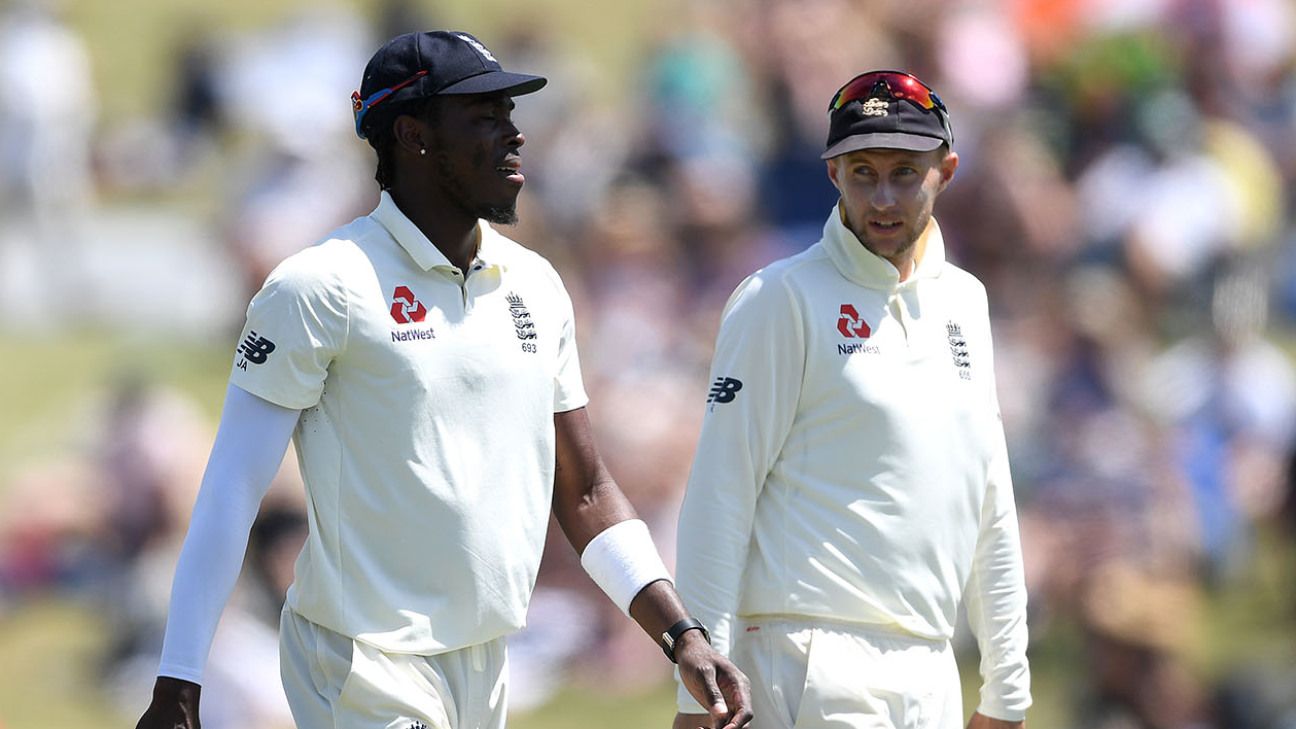 Jofra Archer and Joe Root are the two English players that South Africa will be targeting this summer as they seek to get their first World Test Championship points on the board.

While South Africa are primarily concerned with getting their own confidence back after a humbling tour to India where the batting, in particular, was exposed, their line-up has to find form against an attack that some argue is among the best around.

The experience of James Anderson and Stuart Broad, who have run through South Africa before, and the support of Chris Woakes, Sam Curran and Ben Stokes present one challenge but the pace of Archer brings another, and assuming he recovers from a bout of sickness in time for the Boxing Day Test, it’s the thing South Africa are most wary of.

“He brings something different to the attack, he can bowl quickly in stages, so you’ve got to prepare for that and hopefully we can play him well this series,” Faf du Plessis, South Africa’s captain, said.

“It’s important to make sure that we don’t let him start the series well. With someone like that, who builds a lot on confidence, it’s his first tour to South Africa, the Kookaburra ball is a little bit different than the Dukes so for me it’s important that we can start well against him.”

Archer made an impression on du Plessis and Co. immediately when, in his fourth ODI and on World Cup debut, he hit Hashim Amla on the helmet and stunned South Africa. They lost that game and we all know how their World Cup campaign unravelled from there.

“Their batting is inexperienced. There are one or two guys that have done well and if you can keep them quiet in a series like this… we can challenge them”

Archer went on to be England’s most successful bowler at the tournament and enjoyed a strong start in Test cricket in the Ashes. His 22 wickets in four Tests put him third on the wicket charts and he also topped the averages, making him one of 2019’s top finds.

“A lot of talk has been about Archer and how well he has been bowling. He bowled really well in the Ashes but if you have a look at how things went down in New Zealand, he probably wasn’t at his best so things can change overnight,” Mark Boucher, South Africa’s coach said.

Archer took just two wickets in as many Tests in New Zealand and conceded over 100 runs in each match, proving himself to be fallible. His problems have continued since arriving in South Africa, with a sickness bug ruing him out of action for a week and leaving his participation in the first Test in some doubt.

However, his absence did also stop some of South Africa’s players from getting a first look at him with a red ball in hand. Three members of the Test squad – Pieter Malan, Rudi Second and Andile Phehlukwayo – are all part of the A side, with Phehlukwayo’s 3 for 55 proving to be the most successful return.

As for Root, though his 226 in Hamilton underlined his quality as a batsman, his tactical acumen as captain has been found wanting and there’s no better team to exploit an England’s captain’s weaknesses than South Africa.

Du Plessis joked that the spotlight on Root’s leadership was why Cricket South Africa had brought Graeme Smith back into the fold – on consecutive tours of England in 2003, 2008 and 2012, he oversaw the departure of three England captains in Nasser Hussain, Michael Vaughan and Andrew Strauss.

However, Jacques Kallis’s warning to Root was the one that the England captain will be more wary of. “They’ve kept him as captain so they obviously believe in him. We will try and keep the pressure on him and it’s an area we will target,” Kallis, South Africa’s batting consultant, said.

South Africa’s pack have a habit of going for the head of snake, as Dale Steyn used to say, and have successfully won series by targeting Michael Clarke (2012), Steven Smith (2016 and 2018) and Virat Kohli (2017-18). Root’s role at No.4 is pivotal in a fallible England line-up and South Africa know that if they can get him early, they could create a big opening.

“Their batting is inexperienced,” du Plessis said. “There are one or two guys that have done well and if you can keep them quiet in a series like this… we can challenge them.”

However, for Kallis, Ben Stokes could be England’s real dangerman, especially because South Africa don’t have an equivalent. Since Kallis’s playing days, South Africa have struggled to fill the role of top-order allrounder and have shifted their focus to finding someone who can do a similar job lower-down.

Vernon Philander has developed into a solid No.7, and Kallis is working with Dwaine Pretorius and Phehlukwayo to achieve the same batting consistency. But none of those players have had the same effect as Stokes with bat and ball combined and Kallis hopes South Africa can keep him in check.

“He has done it [won matches] in a lot of formats and now he is starting to do it in Test cricket. It is always nice seeing other allrounders come through. He plays the game quite differently to the way I used to. He is a bit more aggressive, especially with the bat.”

Stokes has already done some damage on this tour, dismissing Malan for 34 in Benoni but that’s not what South Africa will remember him for. Instead, it’s his 258 at Newlands four years ago, his expletive-laden run-in with Temba Bavuma (who will miss this match through injury) and his long-running battle with Kagiso Rabada. These are what fill memories and promise another heated contest.