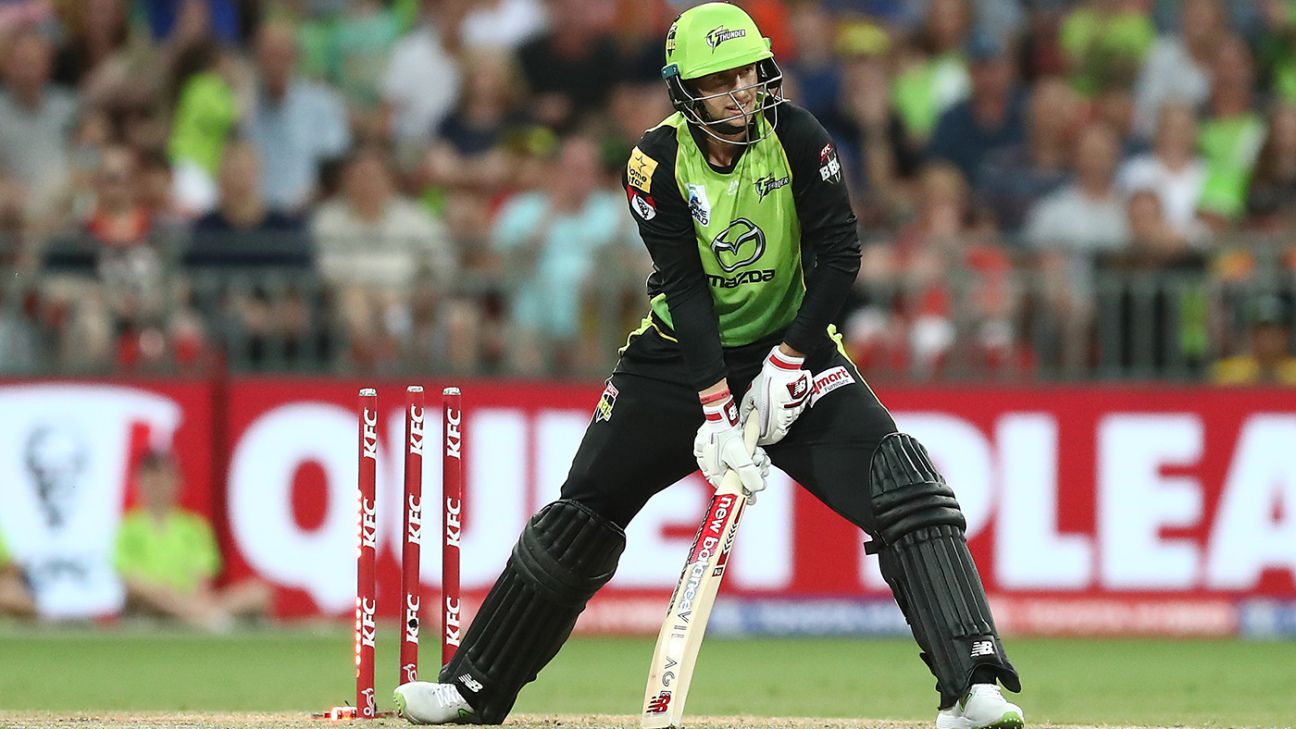 It was perhaps fitting that Joe Root’s Big Bash stint ended with an inconclusive 0 not out off zero balls as the rain came down at Spotless Stadium in Sydney. The tournament never really got going for England’s Test captain, who now heads back to London before hopping on another flight to the Caribbean.

He finished with 93 runs at 15.50, a strike-rate of 114.81 and a top score of 26. Some of the pitches made free-scoring tricky and he was dismissed by spin in four of his six innings. He batted No. 4 throughout, Callum Ferguson preferred at three after the powerful opening pairing of Jos Buttler and Shane Watson, when it has often been felt during his T20 career that his ideal spot is in the top three.

“As an overseas player you come over and your main focus is to try and make big runs for your team but it hasn’t quite materialised the way I would have liked,” Root told the Daily Telegraph ahead of his final match. “I’ve made some good starts and feel my game has really come on in this format but, by my own standards, I don’t feel like I’ve produced scores I would have liked, which is disappointing.”

Root had come to Australia with the hope of re-establishing his credentials in the T20 game. Nearly two years have passed since his starring role in England’s World T20 campaign, which was derailed at the last moment by Carlos Brathwaite. His 83 from 44 balls in the record chase against South Africa was a masterclass and his 56 in the final, coupled with two first-over wickets, was six balls away from being tournament-winning.

Now, however, it feels as though his T20 career is in an uncertain place. Not because of an underwhelming Big Bash, but because of the bigger picture that made him seek out the opportunity in the first place, which came during a rare gap in England’s crowded schedule.

Last year Root was rested for the T20 tri-series against Australia and New Zealand, although it took some persuading from Trevor Bayliss who could see the strain the 4-0 Ashes defeat and the associated dramas of that tour had had on his Test captain. He played just three T20Is last year, making a sprightly 34 against Australia before scores of 0 and 9 against India led to him being dropped for the series decider at Bristol. There are three T20Is in West Indies in March and it will be interesting to see if Root is selected. He didn’t play in the one-off match against Sri Lanka in October.

The decision to allow him to come to Australia after the Sri Lanka tour split opinion. One view was that, given England’s hectic schedule for the next 18 months – and especially given the importance of the 2019 summer with a home World Cup and an Ashes series in quick succession – he should have taken the time off.

The other view is that careers are short and this trip came with minimal risks, as put forward by Nasser Hussain. “You have to think about the bigger picture,” Hussain wrote in the Daily Mail shortly before Root’s BBL stinit. “The old fogey in you might question him playing Big Bash and then being rested from a one-dayer or the Ireland Test match next July, say. But look at the bigger picture: is it making Joe Root a better cricketer?

“Well it should do and knowing Joe he will throw his heart and soul into it. He won’t go to sit on Coogee beach. This will all be about him improving. Down the line he might well feel a bit jaded. He might look back and wonder whether he needed to go but, given the choice of a few weeks there or freezing cold in Sheffield, it is a no-brainer.”

When Root’s 50-over place was starting to be queried during a lull in scoring last year, any doubts about his importance were quickly shut down by back-to-back tons against India – the latter marked with an out-of-character “bat drop” celebration at Headingley. Even in England’s ultra-aggressive era there is room for Root. But, largely through no great fault of his own, the same may not hold true in the T20 game.

It isn’t that Root’s game has regressed massively, it’s that he has had limited chances to evolve it since the World T20, and keep up with the best in the world (his Thunder team-mate Buttler, for example, who has led the scoring charts). Since that final in Kolkata in April 2016, Root has played four matches for Yorkshire in the T20 Blast across two seasons. His one outing in 2018 brought 51 off 22 balls against Lancashire at Old Trafford, a reminder that he still has the game when it all clicks.

Besides, the T20 format will take a back seat for much of this year – there are bigger fish to fry with the World Cup and Ashes double that could define this generation of England cricketers. But it will come back into focus ahead of the World T20 in Australia in 2020. Root may at least have picked up some intel for that tournament, although it has to be hoped that the pitches for that tournament are better than for the BBL, and it would still be a surprise if he wasn’t back in Australia for that campaign.

Root has every right to want to be the best he can be in all formats, and reaffirm his status among the world’s elite batsmen who stand atop the batting ranks in Tests, ODIs and T20Is. But at the moment it looks a challenging ask.