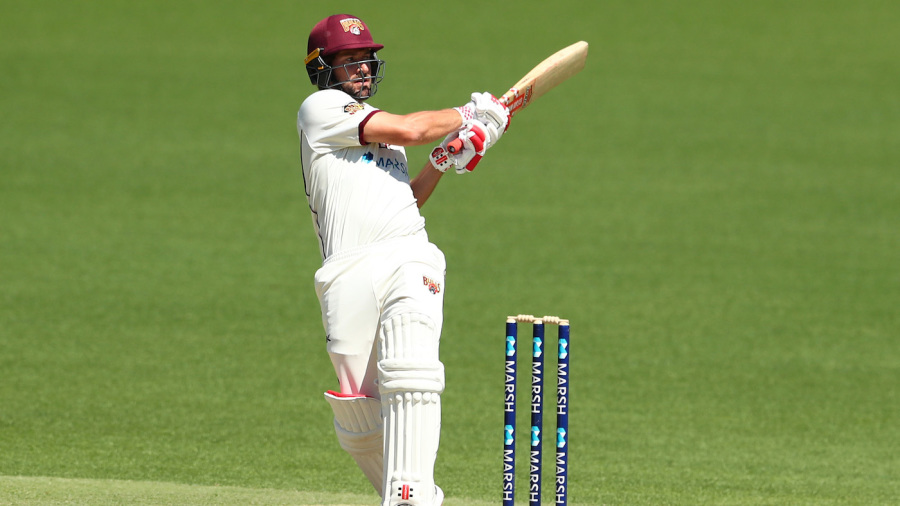 A fighting half-century from Joe Burns has helped Queensland hold off New South Wales’ charge to victory momentarily on a rain-affected third day at the Gabba.

Only 63 overs were possible on the third day after the game was delayed due to the rain that had fallen overnight. The Blues declared their innings closed on their overnight score to lead by 135 runs.

The Bulls second innings started cautiously and they lost Matt Renshaw LBW to Trent Copeland with the total on 22. Copeland trapped the left-hander on the front foot from around the wicket despite Renshaw getting a good stride forward.

Usman Khawaja made an elegant 24 with four boundaries before being undone by Sean Abbott. The right-arm quick angled in from around the wicket and nipped one away to scratch the outside edge as Khawaja was half-forward.

Burns and Marnus Labuschagne steadied with a 56-run stand and all but erased the lead. But after reaching a patient half-century, with just four boundaries, he was tempted into driving Copeland only to edge it to second slip where Steve Smith held a comfortable catch. That sparked a mini-collapse as the Bulls lost 3 for 32. Harry Conway continued his form from the first innings to take his tally to seven wickets for the match.

The first was fortunate with Charlie Hemphrey strangled down the leg-side. The second was a superb piece of bowling, finding the edge of Sam Heazlett with one that angled in and nipped away late.

Labuschagne held firm making a composed unbeaten 48 to steer the Bulls to stumps alongside Jimmy Peirson who remained on 21. But they will need to bat well on the final day to put the game beyond the Blues reach.