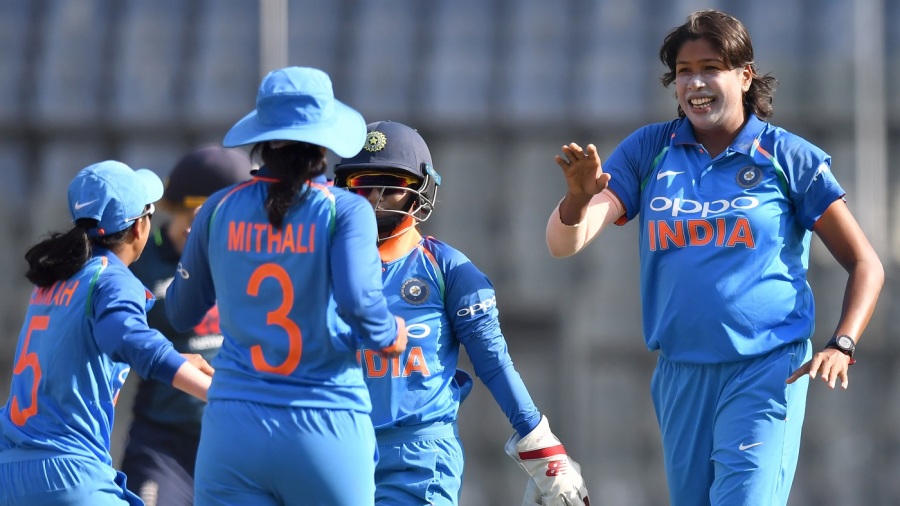 Jhulan Goswami, a month short of celebrating her 37th birthday, proved why she is still a key member of India’s ODI set-up, as her three-wicket haul set up a comfortable eight-wicket win for the hosts over South Africa in the first ODI in Vadodara. Equally encouraging was the arrival of 24-year-old batsman Priya Punia, who celebrated her ODI debut with an unbeaten 75 to finish the moderate 165-run chase with 8.2 overs to spare.

Goswami struck off the first ball of the match after South Africa elected to bat. Getting the ball to jag back in sharply off the seam, she trapped Lizelle Lee lbw as the batsman shouldered arms. Then Ekta Bisht got into the thick of things by removing the experienced Trisha Chetty and Mignon du Preez in a superb spell of flight and guile.

Both batsmen, du Preez in particular, dragged their feet out in trying to get to the pitch, only to be defeated by the late dip to see Taniya Bhatia effecting two excellent stumpings. South Africa were in a spot at 56 for 3 in the 12th over, and the onus was on Laura Woolvardt to steer South Africa out of a hole, and she slowly rebuilt to make 39 until a dream delivery from Deepti Sharma accounted for her.

Deepti got it to grip and turn sharply to beat Woolvardt’s inside edge as the ball crashed into the stumps. Her 39 had consumed 62 deliveries. With Bisht, Goswami and Deepti having done their bit, the Indian attack’s versatility came to the fore when Shikha Pandey struck to dismiss Sune Luus, the captain, and Nadine de Klerk in quick succession.

Marizanne Kapp waged a lone battle in the lower order to make 54, with some support from No. 10 Tumi Sekhukhune, who blunted 34 deliveries for 6 in a 30-run stand. The innings drew to a close when Goswami returned to dismiss Kapp, out caught at cover, in the 46th over. India started briskly courtesy Jemimah Rodrigues, who assumed the role of senior partner and quickly got the scoreboard moving by looking to attack South Africa’s new-ball pair of Shabnim Ismail and Kapp. This allowed Punia, playing in place of the injured Smriti Mandhana, time to settle in and make it count.

She held her own, not for once overawed by the occasion or a slow start and patches of struggle, to eventually cash in for her maiden ODI fifty, hitting eight fours along the way in her 124-ball knock. Nondumiso Shangase, the debutant, broke the 83-run stand by dismissing Rodrigues, while Punam Raut, featuring in her first proper outing in nine months, made 16. Punia and Mithali Raj, the captain, joined forces to see off the chase without much hassle from there on.

The second ODI will be played on Friday. This series isn’t part of the ongoing Women’s Championship that serves to identify seven direct qualifiers and hosts New Zealand for the 2021 Women’s World Cup. India beat South Africa 2-1 away last year in the series that contributed towards points for the championship.