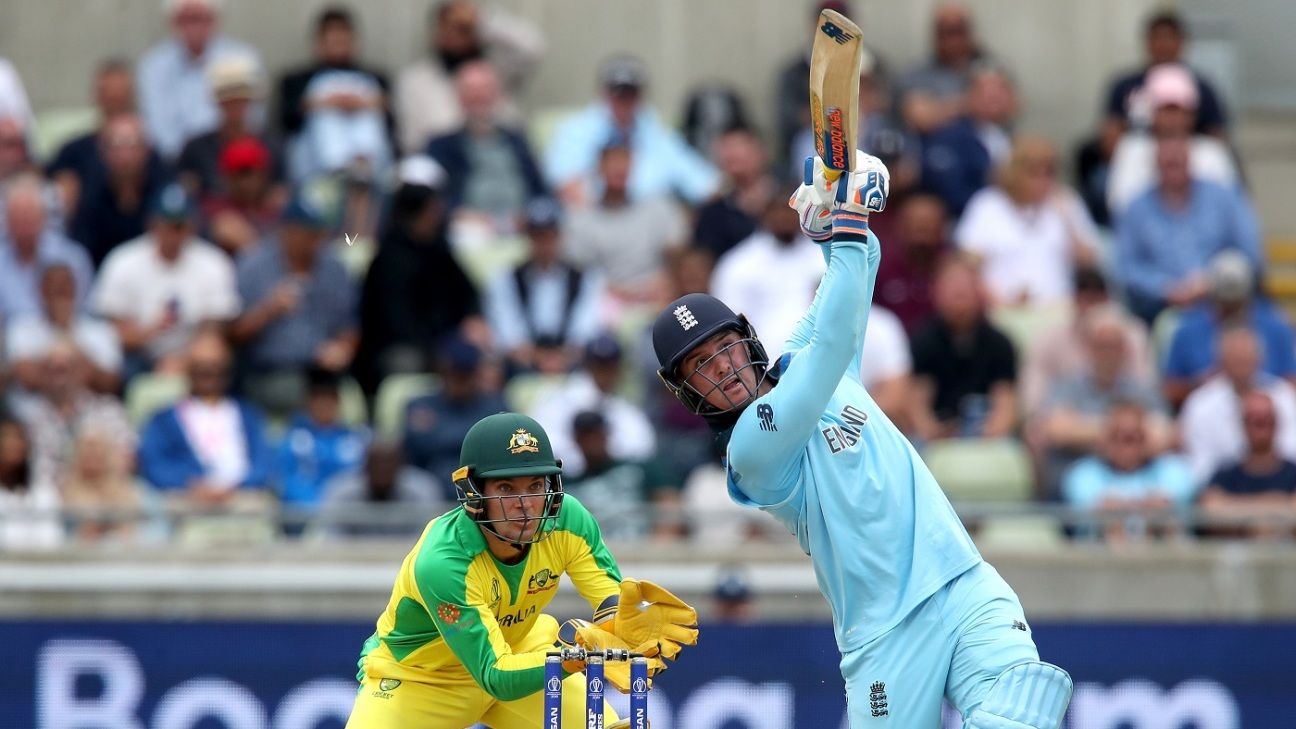 Nothing underlines how much England’s World Cup focus has grown to dominate the national team’s thinking quite like the emergence of Jason Roy as the selectors’ choice to open the Test match batting order a matter of weeks before the start of the Ashes.

Look for a rationale to choose Roy based upon his red ball numbers for Surrey and England Lions and it is hard to discern one – he has played just three first-class matches since the 2017 county season, and not played more than five first-class matches in a northern summer since 2016.

But the undeniable power of his ODI displays, culminating in a World Cup where he was nothing less than essential to England’s victories, have vaulted Roy into a role that England have found problematic for quite some time. In the words of the England selector Ed Smith, the national set-up has been waiting for the right moment to unleash him at Test level, and forecast quite some time ago that the Ashes series following a successful Cup campaign would be ideal.

“It’s no great secret the selectors have long been admirers of Jason,” Smith said in Canterbury. “The big question with Jason Roy was when was the ideal time if he was going to make the move into Test cricket? He was injured at the back end of the ODIs against India last summer and then also when he went back to play for Surrey. So he had two injuries then.

“Joe Root and I spoke at length months ago about the scenario in which Jason Roy finished the World Cup confident, full of runs and went straight into the Ashes and that’s what we’ve done. It feels like a really good time for Jason to join the Test team as an opener. He’s in and has our full backing.”

Plenty of cricketers have made their way into Test cricket via the limited-overs pathway in the past. Some with great success, like David Warner, others rather less so. Certainly Roy will be hoping to avoid the journey of Aaron Finch last year, as he spiralled into a state of confusion during Tests against India that led momentarily to questions about whether he would be worth his place in the Australian World Cup squad. Smith said that Roy’s evolution as a more three dimensional batsman had been going on for some time, even if his first-class appearances have been few.

“I think we’ve all seen him grow and improve as a player in white-ball cricket. He’s a more complete player than he ever has been. There’s never been any doubt about his talent, audacity or his presence at the crease – it’s fantastic . All those things are very clear. He’s also gained improved mastery and adaptability. I think he’s a more complete player now than he ever has been. It just felt like absolutely the right time for Jason to make his Test debut.

“Actually where the [World Cup] pitches ended up, it was often a pretty even contest between bat and ball. We all saw, not just in those crucial four effectively knockout games when Jason came back, but also a much longer period of time that Jason is growing as a batsman all the time. That was just one manifestation of a much wider development, I think.”

Also read: Morgan has earned the right to decide his own future – Strauss

Of course there is another tale of an England cricketer riding the coat-tales of his ODI audacity to a Test debut during an Ashes summer, that of Kevin Pietersen in 2005. Asked for a parallel, Smith preferred to look at how Jos Buttler was gradually eased into Test cricket after first making his name as a limited-overs operative. That exposure arguably aided Buttler in becoming an even more effective ODI batsman than he was already.

“I suppose the analogy I’ve thought of a little bit would be Jos Buttler. Both different people and different players but there is that sense of trying to catch the right time,” Smith said. “Going back to that first decision last May when coming in as selector it just felt like exactly the right time for Jos to come back into the Test team.

“Although I wouldn’t compare them because they are very different players and different people, in the same way it feels like the right time for Jason. He’s playing very well, growing and developing all the time and it’s an exciting prospect for us.”

The question of whether Roy can adapt to the demands of Test matches and the spotlight of the Ashes speaks to a wider one about England. How, having invested so much time and effort into a four-year ODI campaign, might the team led by Joe Root find the right technical gears and mental reserves to succeed in the longest form of the game, against an Australian squad that, with a few World Cup exceptions, has enjoyed a far longer, more directed preparation.

“Occasionally there is a real grand strategy and Andrew Strauss put in a good strategy when he came in in 2015,” Smith said. “We saw an incredibly unpredictable finale to a very thorough worked out strategic plan. It is not often a national sport organises itself to such clarity with a particular end. There is a challenge to build and grow on that rather than to say that is the full stop on the end of the sentence.

“One thing we really want to do is develop this end of English cricket and not let it peter out but to push on from here. It is hard if you are moving things around as Andrew did, obviously certain things like the scheduling of the Championship has been bookended to the beginning and end of the season and that brings challenges for selectors.

“However the same degree of attention, clarity and rigour we tried to bring to World Cup selection, we have also brought to Ashes selection. The balance is different because people are coming out of the World Cup with some injuries and tiredness and you are also looking at six Test matches in a short period of time in the second half of the summer, so that is a unique combination but that is part of the fun.”

Should Roy fare anything like Pietersen 14 years ago, then the fun will be all England’s.