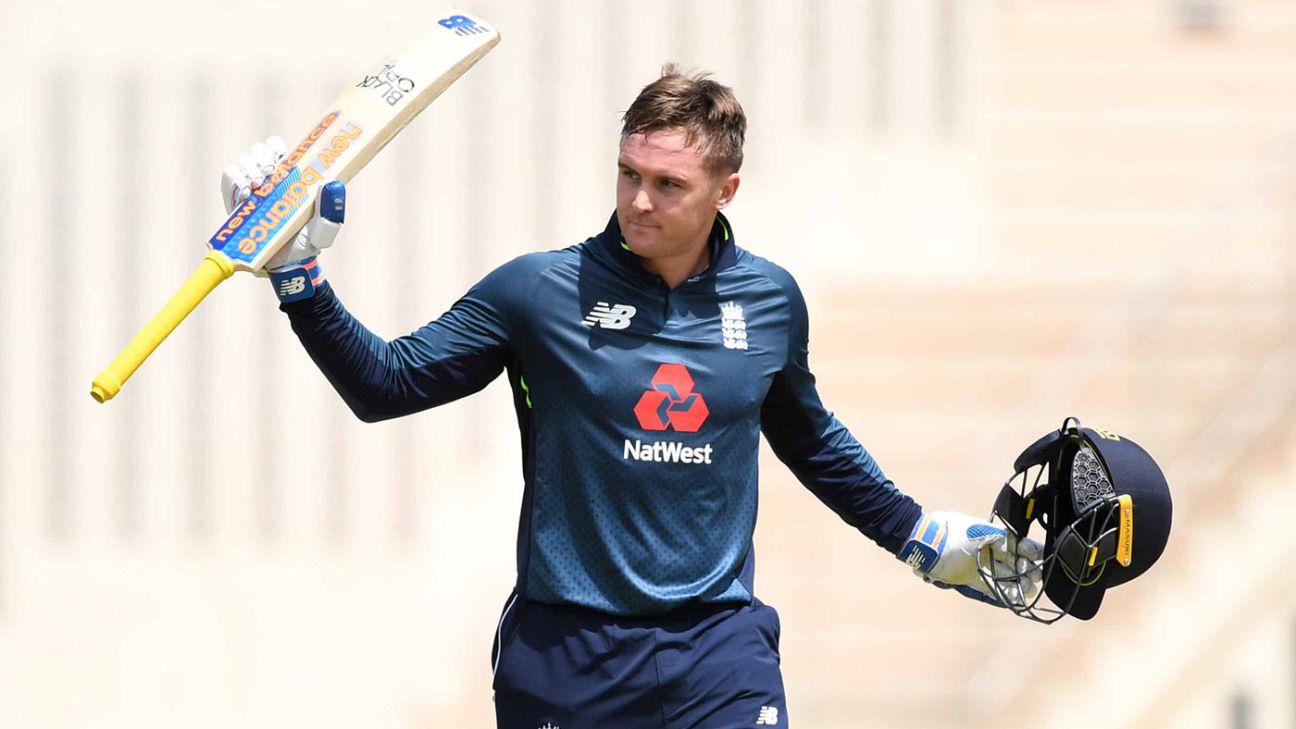 The coming English summer is set to be dominated by two events, and it is a marker of how priorities have changed that the Ashes following the World Cup is not merely a matter of chronology. While Jason Roy is likely to be a key performer in England’s attempts to finally lift a global 50-over trophy, he is also hoping to press his case as a candidate to take on Australia, too.

There was a time when England’s one-day team was viewed as largely as a proving ground for those with Test aspirations. Now the format has moved front and centre, with Roy among a buccaneering batch who have propelled England to No. 1 in the rankings; but while their World Cup prospects have rarely looked more promising, the Test side remains a riddle wrapped in an enigma.

Chief among England’s conundrums is the make-up of the top three, and even Roy admits it would be a step into “the great unknown” for the selectors to drop him in as a Test opener – though his director of cricket at Surrey, Alec Stewart, suggested he would cope with the switch from white ball to red. Having been touted as a potential Test tourist in the Caribbean, where England variously used Rory Burns, Keaton Jennings and Joe Denly to open the batting, there is a sense Roy believes his time will come sooner or later.

“It’s the great unknown, really,” he said of his capabilities as a Test batsman. “I don’t know. I think my technique’s shown to be pretty good against fast bowling early on. It’s got a lot better, I’ve progressed quite a lot in the last two years. Who knows? It’s so difficult to say because I’ve never been a part of the Test team, even the squad, training or whatever. But if given the opportunity, let’s hope I can.

“I’ve had conversations [with the England management] over the last couple of years. It’s just a case of being patient and waiting for my turn. It’s all talk, I’ve kind of got used to that side of things. Until I’m actually there, putting my cap on, then I’ll be excited. But I’m taking each day as it comes.”

Stewart, an attacking former opener in Test and ODI cricket himself, was more forthright in backing Roy for involvement in the Ashes, possibly as a partner at the top of the order for Burns, another Surrey player who finally won recognition over the winter.

“Jason is opening in one-day international cricket. Twenty20 and Test cricket are miles apart, but in the first 10 or 15 overs of 50-over cricket you still have to respect that new ball,” Stewart said.

“I don’t see it as a big issue for him and he’d cope with the stepping stone up to Test cricket. The Australia attack is a challenging attack, but Jason’s method is a solid one. He’s a good stroke player and a good hitter of the ball, but he can defend well too, which you have to be able to do.”

However, while the theory is sound enough, in practice it could be fiendishly tricky. Surrey only play once in the Championship before May and Roy will by then be in exclusively one-day mode until after the World Cup. As Stewart noted, with Roy currently recovering from a hamstring injury – though still hopeful of facing Essex at The Oval next week – a call-up ahead of the Ashes could see him playing his first first-class innings of the summer in a four-day Test against Ireland in late July.

Roy only played twice in Surrey’s Championship-winning 2018 season, though a sparkling hundred against Essex in the final round, batting at No. 3, helped fuel speculation about whether he could transfer his ODI form – where he averages a little under 40, with seven hundreds – into the Test arena. It is seemingly a challenge his is keen to embrace.

“It’s more just a mental switch. The physical side of things, the technique side of things stays the game. Not a huge amount changes, just a game plan change, that’s all it is. It’s always fun going from T20 – even T10 this winter – into a longer format, because I’m under less pressure to score at ten an over. It’s actually quite nice to be able to bat, watch the ball and hit the ball, and be really relaxed about it, instead of having to score.”

In the more immediate term, his importance to England’s World Cup campaign will be the overriding concern. Having missed three ODIs against West Indies with injury, before coming home early for the birth of his first child, Roy will not be rushed into action for Surrey. “I wanted to push myself for the university game starting on Thursday but the trainers were realistic about it and didn’t want me to push too hard, especially with the World Cup coming,” he said.

He is relaxed, too, about seeing Alex Hales step into his one-day spot and immediately crack 82 from 73 balls, helping set up England’s latest 400-plus total in Grenada, suggesting that the friendly rivalry between himself, Hales and Jonny Bairstow can only benefit the team.

“It keeps you on your toes but it’s also extremely comforting. I tweaked my hammy over there [in the Caribbean] and it wasn’t a question of ‘I’ll play on fifty percent’, because I know we’ve got a player that can come in and do a great job for us. So it’s really comforting to know that even if someone’s injured, there’s someone to come in a do well. It’s a good thing.”

Healthy competition at the top of the order – not something the Test team has been used to. Perhaps picking players on one-day form might not be such a bad idea after all.