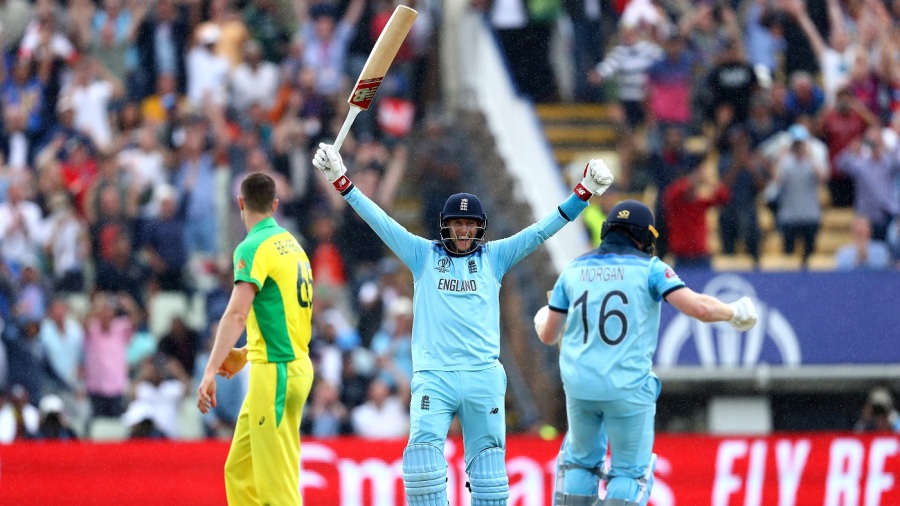 How does that old song go again? Thirty years of hurt? Make that 44 and counting (and contrary to the lyrics, England’s cricketers certainly gave up dreaming for at least 20 of those). But suddenly it’s all up for grabs. On home soil, with the wind behind their backs and the fates screaming in their favour. Is it coming home this time? If you don’t believe it now, you truly never will.

One thing is for sure. New Zealand await in the World Cup final at Lord’s on Sunday, where for the first time since Sri Lanka at Lahore in 1996, a brand-new team is sure to be crowned as champions. But after the jitters and the wobbles, the niggles and the doubts, today was the day when England banished the angst and restored the roar that had carried the side to the top of the world ODI rankings.

Put simply, Australia are not meant to suffer beatings this comprehensive in World Cup knock-out matches. They had not lost any of their previous seven visits to the semi-finals, and yet a massive 107 deliveries still remained when victory, fittingly, was sealed with a swipe over long-on from England’s captain, Eoin Morgan, the man in whose image this team has been remoulded since the misery of 2015.

After adapting their gung-ho attitudes to haul themselves into the last four, this was a throwback performance of precisely the right genre from England, on a day that had dawned fraught with the sort of anticipation not truly witnessed in an England v Australia contest since that seismic Ashes Test at Edgbaston in 2005. Then as now, England knew they had their opponents’ measure after a generation of subjugation, but the weight of history isn’t something that can be cast off at a whim.

Or so we might have assumed. Instead, England tapped into the same mindset that had crushed Australia 5-0 in their bilateral series a mere 12 months ago, and produced a performance that had far more in common with that 481-run pasting at Trent Bridge than the rather timid, confused surrender at Lord’s a fortnight ago that had left their tournament in such jeopardy.

Ferocity was England’s watchword from the outset, and with ball and bat alike. Not even the loss of an apparently crucial toss could unhinge them, as Chris Woakes and Jofra Archer contrived in the space of 16 balls to blow away Australia’s totemic openers, Aaron Finch and David Warner, before Adil Rashid produced the spell of his tournament to undermine a doughty fightback from Steve Smith and Alex Carey, who batted on gamely after a savage blow to the chin from Archer had left him bleeding profusely and requiring stitches.

And thereafter it was over to Jason Roy – the man of England’s tournament, whatever the final may bring – who climbed into a sub-par target of 224 with a hugely intelligent blend of caution and mounting arrogance. He and Jonny Bairstow displayed the wisdom gleaned from earlier tournament hiccups to see off a briefly threatening Mitchell Starc, but retained the right to flog allcomers with impunity wherever their lines strayed from the straight and narrow.

At the end of the Powerplay, England were 50 for 0 and cruising, and Roy began to turn on the afterburners. Nathan Lyon, a scourge of English batsman in Ashes battles gone by, was pumped for six first-ball as he entered the fray for the 11th over. And when Australia, in desperation, tossed the ball to Smith in a bid for any sort of a breakthrough, Roy responded with three consecutive sixes – the third of which, into the fourth tier of the new stand, was surely the largest on this ground since Andrew Flintoff’s iconic smoking of Brett Lee into what was then a building site during that 2005 Test.

Only accident or injury seemed capable of dampening England’s day, and both did briefly flare up – first when Bairstow had to receive treatment after tweaking his groin while turning for a second run. He was never quite as fluent again before falling lbw to Starc for 34 – a dismissal which, in using up England’s review, had a major bearing on the second flashpoint of England’s chase.

On 85, Roy climbed into a pull at a bouncer from Starc – and was left utterly bewildered as umpire Kumar Dharmasena first began to single a wide, but then rather apologetically raised his finger, seemingly swayed at the last second by the vehemence of Australia’s appeals. Roy signalled for the review, was reminded he had none left, and then launched into an apoplectic rant that betrayed the enormity of the task still at hand.