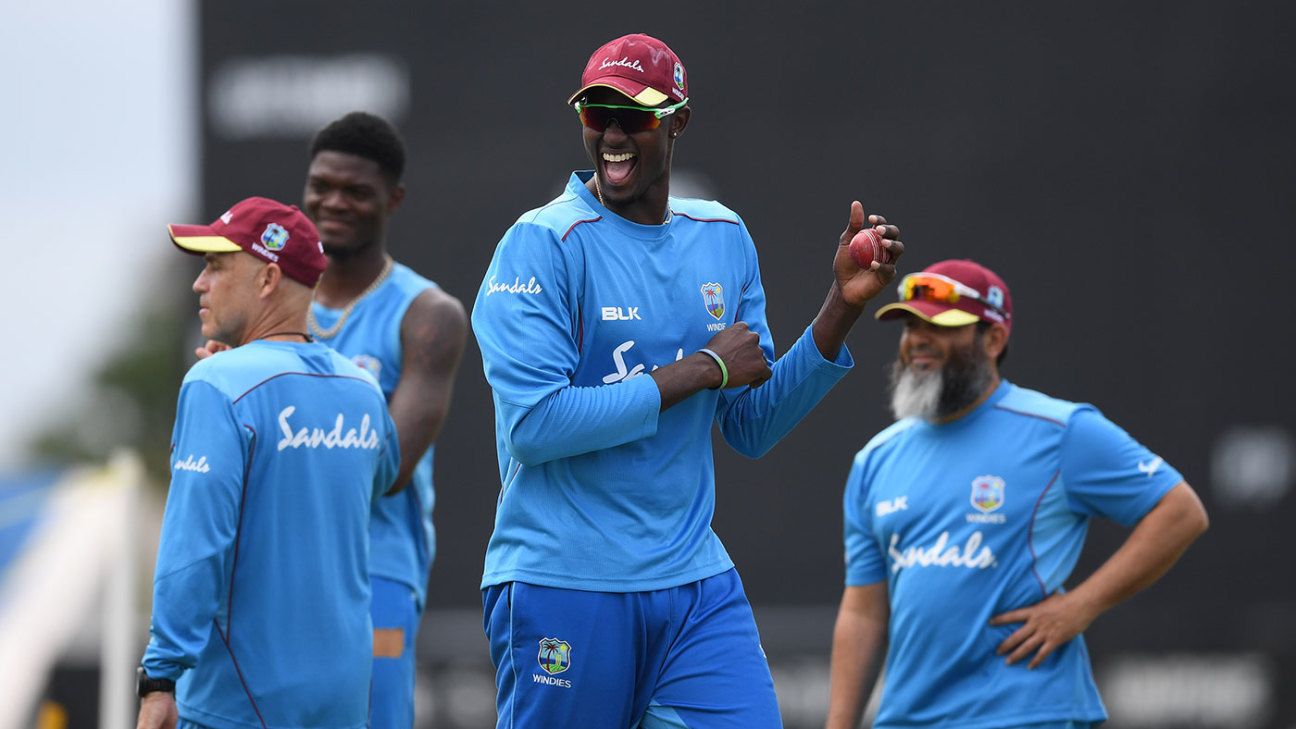 Jason Holder, the West Indies captain, has urged his players to focus on the job at hand ahead of the pivotal second Test against England in Antigua. After his side’s demolition job in Barbados, West Indies only need to win one of the next two matches to seal a rare series win against top-eight opposition but Holder is refusing to be distracted.

While West Indies have shown steady improvement over the last couple of years, their only series wins in recent times have come against Zimbabwe and Bangladesh. Just twice in the last ten years have they beaten another Test team ranked in the top eight: a 2-0 win over New Zealand in 2012, and the hard-fought 1-0 victory against England in 2008-09.

“It’s great to be 1-0 up, but that’s history,” Holder said. “We are happy to be leading in the series but we have our feet firmly on the ground. We are not focusing on what happened before in Barbados. We are looking forward to this match and what we have ahead of us.

“It’s a matter for us to move on and understand what we need to do. We speak about consistency in the dressing room and I think we’ve got to be hitting all three departments well every time we step on the field.”

Asked about the potential significance of a series win over England, he added: “It would mean a lot but again I don’t want to focus too much on the series at this point in time, I want to focus on the second match. We need to be consistent in all three departments.”

The key feature of West Indies’ performance in Barbados was contributions coming from throughout the side. Holder led the way with his second-innings double-hundred, but there was a five-wicket haul for Kemar Roach, career-best figures for Roston Chase and important innings from Shane Dowrich and Shimron Hetmyer.

Holder said that while his players had shown “glimpses” of what they were capable of in the past – such as their dramatic 2017 win at Headingley – he was pleased that the team was growing stronger as a collective.

“It’s a matter for us to continue to build the side,” he said. “What’s really encouraging is that we’ve seen glimpses that this team can perform, and beat top sides in the world. We’ve had personal success and it’s good to see us bringing it a little bit more together as a side, so hopefully we can continue in that vein and the guys continue to be hungry for success.”

West Indies had a couple of fitness question marks over Dowrich, who did not keep on the fourth day due to a sore back, and Shannon Gabriel, but both are expected to be fit to play in Antigua. The sight of Gabriel giving Joe Root, England’s captain, the hurry up was a throwback to traditional West Indian strengths and Holder was looking forward to unleashing his pace spearhead once again.

“It wasn’t a surprise, it’s something that Shannon’s done to many batsmen around the world. He carries pace and he was aggressive in that spell, which we asked of him. It was really good to see him come out after lunch – we were probably a little flat with England two down and over 100, we needed to break the partnership and Shannon really gave us that momentum. It was really good to see.

“He’s generally quick and awkward [to face]. Just expect Shannon to run in – he had a bit of a toe injury in the last game but that seems to have healed up pretty nicely. So we expect Shannon to be running in tomorrow.”

Should West Indies produce a similar performance, England might find it hard to live with them and Holder admitted the thought of sealing the series with a game to play had not escaped him – though he was keen to insist West Indies remained the underdogs.

“It’s at the back of my mind. I just said to the guys, make sure we keep it out of our minds, make sure focus on what we need to do here – we need to get 20 wickets to win this game, we need to put up runs, and if we do that and hold our chances, we have a good chance. We’re still ranked No. 8, England are No. 2 or 3, so we’re definitely the underdogs.”