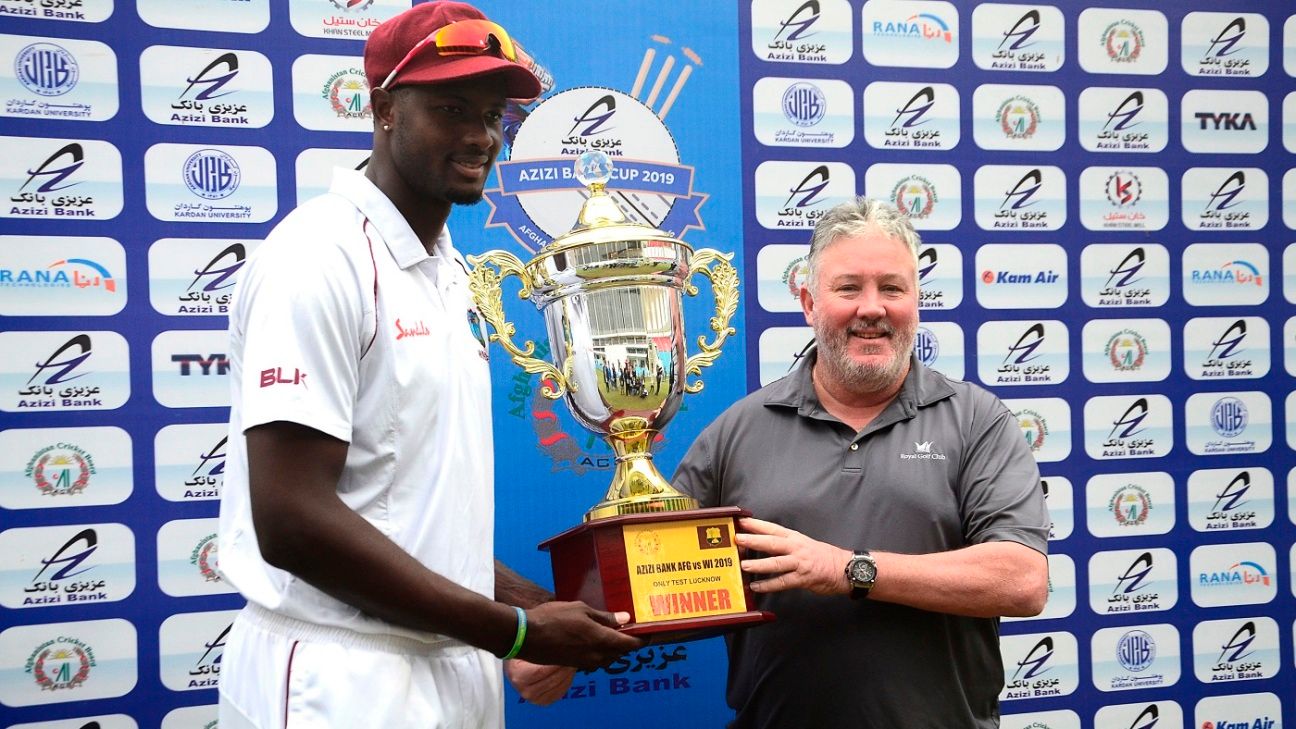 West Indies may be ranked eighth in Test cricket right now, but captain Jason Holder believes that by the time the World Test Championship is done, they have a “realistic” chance of being in the top four.

Holder led West Indies to a nine-wicket win against Afghanistan at the Ekana Stadium in Lucknow, with the match completed in just over two days. Holder himself hastened the end on the morning of day three, making short work of Afghanistan after they had resumed on an overnight score of 109 for 7 on Friday. They were bowled out for 120 with Holder picking up all three wickets, and West Indies chased their target of 31 in just 6.2 overs.

“I think by the end of the Test Championship, I don’t see it being impossible for us to be fourth or fifth in the world,” Holder said at the post-match press conference. “That would be a significant achievement in a two-year period. We’ve got some tough series coming up. We’ve got England, then South Africa coming to the Caribbean, then we’ve got New Zealand… all good cricket sides. But I don’t think it’s beyond us to beat them. We’ve just got to make sure we keep building and developing. Once we do that, we can compete with any side in the world. A realistic target in two years would be to be ranked three or four in the world.”

This Test wasn’t part of the World Test Championship, though Holder believed his team did most of what could be asked of them. Holder had chosen to bowl on winning the toss, a decision that came under question early on, because West Indies were playing with three spinners and there wasn’t too much on offer for pacers. However, Rahkeem Cornwall’s career-best figures of 7 for 75 meant the desired result was achieved, though via a path that wasn’t envisaged at the start of the match.

“We did expect the spinners to play a heavy role in this game, but with the new ball we probably expected a little more from the fast bowlers,” agreed Holder. “As the ball got older, I felt it did a little bit more. Their openers played well and pretty much saw off the new ball. Our spinners really came into effect with the harder ball, so I think it all worked out the way it was supposed to. Credit to Rahkeem [Cornwall]. He bowled an exceptional spell in the first innings and then backed it up really well in the second innings, supported well by the other bowlers.

“I don’t regret the decision at the toss. In the end, we played a really good cricket game, and we were clinical. I asked the guys to make sure we don’t leave any stones unturned. Probably would have liked a little bit more in our first innings in terms of our batting, but having said that, we had a lead of 90. I think leads win games. Once you have a hefty lead, it puts pressure on the opposition.”

The only point that left Holder unsatisfied was West Indies’ batting, though thanks to a maiden century by Shamarh Brooks and their own bowling performance, the total of 277 that West Indies got in the first innings proved to be substantial enough. Looking at the future though, Holder felt that improving the batting was key to his goal of taking West Indies higher up the rankings.

“I’ve said it in the last couple of series we’ve played: more responsibility needs to be taken by our batters,” Holder said. “Once they do that and take the bull by the horns, I think our bowling attack has shown it can compete with any attack in the world. We’ve shown glimpses of brilliance, which is all well and good, but consistency is the name of the game. In order to be a world class team, you have to be consistent with your batting. You have to get 20 wickets of course, but you have to set it up with the bat. First innings’ count for a lot. If we can put teams under pressure with our first innings scores, more often than not, West Indies will be up there among the top-ranked sides in the world.”