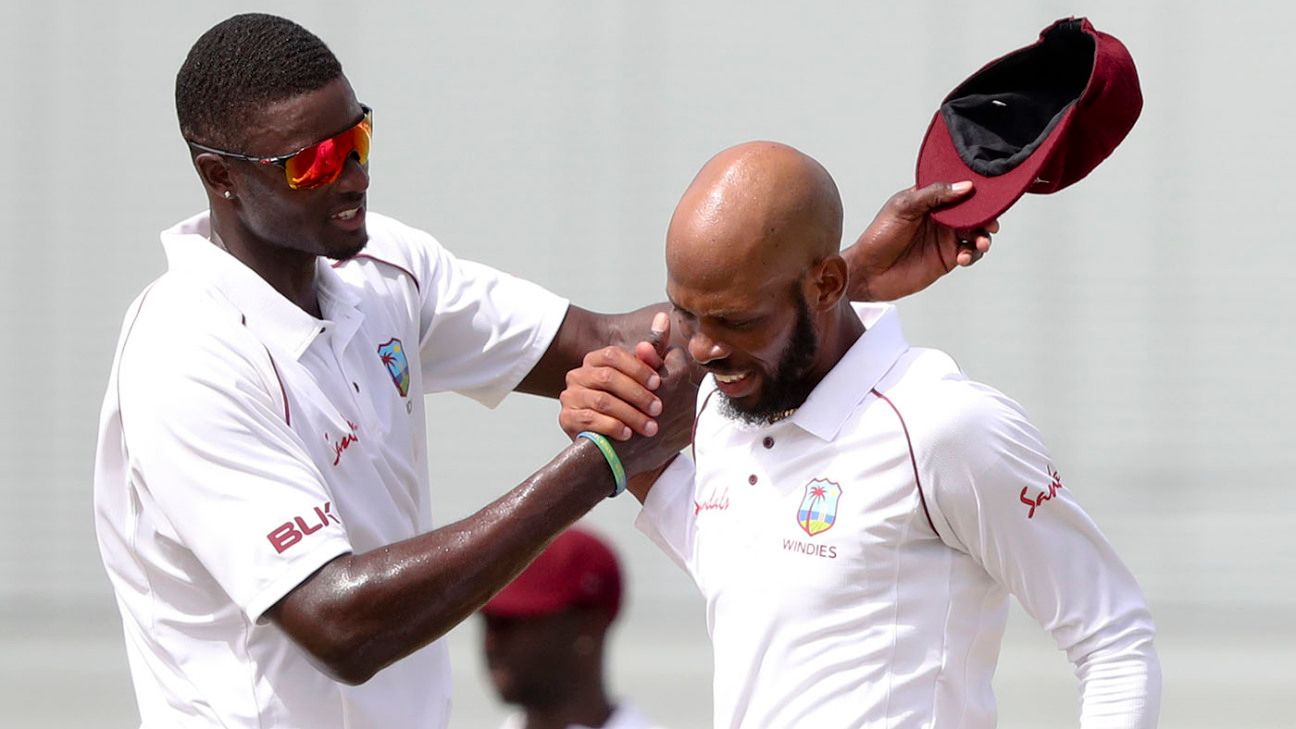 Roston Chase saluted the efforts of his captain and fellow Bajan Jason Holder, after helping to secure an emphatic victory over England in the first Test. Chase claimed a career-best eight-wicket haul as West Indies wrapped up a crushing win to go 1-0 up in the series, but said there was “no greater feeling” than seeing Holder score his landmark double-hundred on the third day.

Holder became only the third man batting at No. 8 or lower to score a Test double-ton, as he and fellow centurion Shane Dowrich kept England toiling in the field, eventually setting them a notional target of 628, or more than six sessions to survive. Holder also claimed two wickets and three catches to be named Man of the Match in front of his home crowd.

“Jason is a legend in my eyes, a long-time friend, I believe in him and he believes in himself on the field,” Chase said. “Could have been no greater feeling than to see him do that double-hundred yesterday. I thought he was going to give it away for a bit but he really showed the true character that he is, so I’m really happy for him and for my friend Shane Dowrich, who came through for the team.”

While England made a decent start to their rearguard, with an opening stand of 85 between Keaton Jennings and Rory Burns, the floodgates opened late in the afternoon session. Having already bowled Burns, for 84, Chase removed Joe Root, Ben Stokes and Moeen Ali in quick succession, before rounding up the tail after tea.

“Looking at the wicket, I always thought I would come into play in the second innings,” he said. “The quicks set it up for us in the first innings and Mushy told me I’m going to have to bowl 25 overs in the second innings, to get my mind ready for it, so I was always prepared to do some work, to give the pacers a rest. I started to pick up some wickets and it went from there.

“I just tried to be consistent and land it my areas, despite what the batsmen were doing, put some revs on the ball and vary my pace a bit.”

With West Indies having cruised into a 1-0 lead in the three-match series, Chase said that it was important for the hosts not to get carried away with victory. The teams travel to Antigua next, with plenty of questions surrounding England, who had been viewed by many as favourites coming.

“It gives us big confidence for the series, because England are a higher-ranked team than ourselves,” he said. “For us to carry on from here, don’t get too big headed, continue to do what we do well, the basics and focus on our processes, we should be all right.”