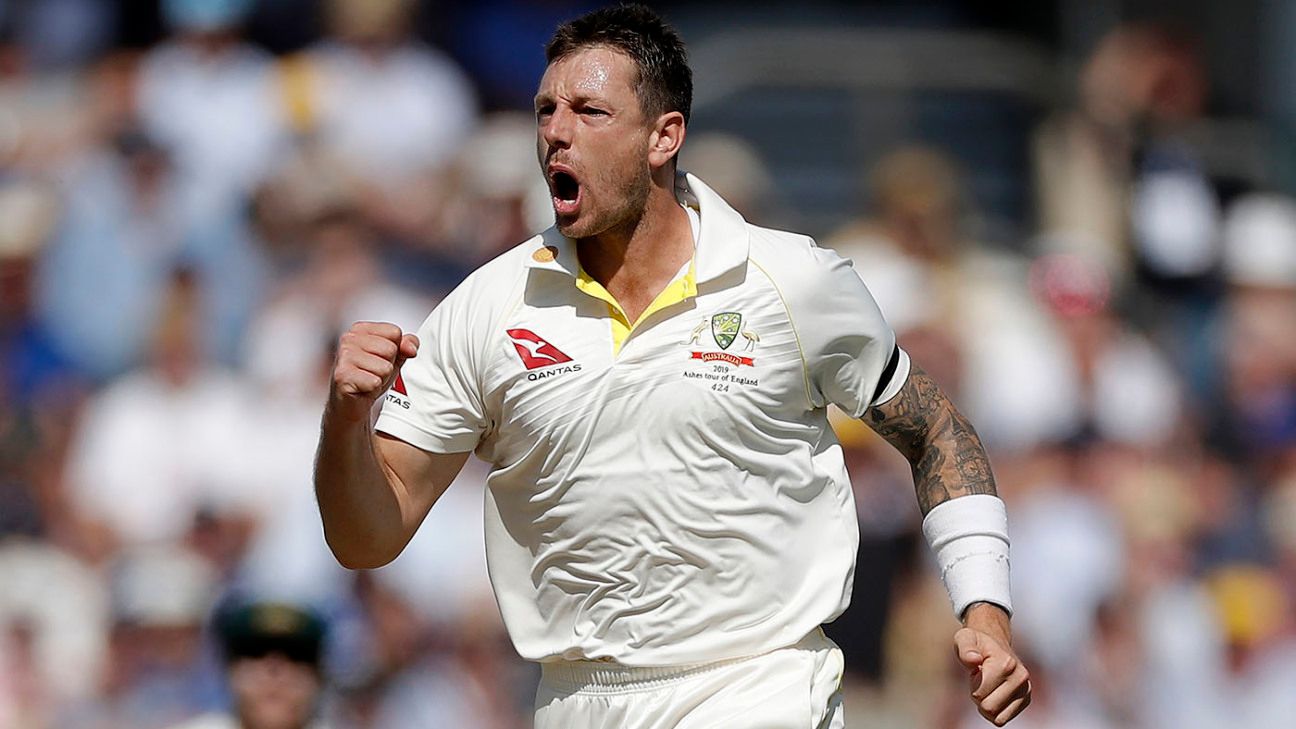 Workload management and resting from matches has become part of the new norm for Australia’s fast bowlers but James Pattinson wants to be able to string back-to-back Test matches together.

Pattinson, 29, was deliberately managed through the Ashes, his first experience of Test cricket in three years after having spinal surgery in late 2017. His bowling loads were carefully plotted as he only played in the first and third Test while being rested for the second and fourth. He was available for the fifth Test but was not selected.

His management has continued on return to Victoria. He played the first two Sheffield Shield games bowling 60 overs on two extremely flat wickets before he was rested from the third game of the season against Tasmania with the Test series against Pakistan in mind.

Pattinson is set to return for Victoria against Queensland at the MCG starting on Tuesday with the Test squad to be announced Thursday and his aim is to be fit enough play consecutive Tests moving forward.

ALSO READ: How Jhye Richardson’s career sped up by slowing down

“I think the next process for me if I do get a chance in the Test arena is trying to play more back-to-back cricket now,” Pattinson said. “I think [being rested] was more being out of the team and coming back after three years.

“I’ve been injury-free now for the better part of a year now. The body is feeling good. Hopefully, that’s the next progression if I do get a chance in the Test team.”

The rest and rotation policy has been a source of consternation for Australia’s bowlers. The selectors are keen for “squad mentality” in order to prolong careers but the bowlers are wary of giving up their spot due to the quality of players available. Australia are likely to have Pat Cummins, Josh Hazlewood, Mitchell Starc, Pattinson and Jhye Richardson all fit and available for Brisbane.

Pattinson said he looks on with envy at the batsmen who do get the continuity of playing every game.

“I think the more cricket you play the more comfortable you feel in terms of your body and how the ball is coming out. You see the batters around and they’re playing all the time and they get into a rhythm. As a bowler, it’s hard sometimes when you’re stopping and going and stopping and going so hopefully the next step of the process is playing some consistent cricket.”

He is aware that his situation is different from his fellow fast bowlers. Pattinson has two screws in his lower back after undergoing the same spinal surgery that prolonged the careers of New Zealanders, Shane Bond, Matt Henry and Corey Anderson. He has to be extra vigilant around how his back feels after big workloads in first-class games.

“When I do have a big load it’s just managing how it responds that,” Pattinson said. “In the past, if I’ve had a big load, it gets a bit stiff, I then manage it, have a break, go again sort of thing,” he said. “It’s mainly keeping that area as mobile as possible. When you’ve got a couple screws in your back it’s about doing as much stretching as possible and not trying to overdo it. I think as you get older you learn how to manage it and a lot of time and effort goes into it.

“I think if I didn’t have that surgery I wouldn’t know where I’d be now. I could have had another stress [fracture] and retired. It’s been a really big tick. It’s held me on the park for over a year now so hopefully, I can keep going.”

Fellow Australia fast bowler Jason Behrendorff underwent the same surgery in October. Pattinson had been in contact with Behrendorff and said his advice was to be patient in the recovery process.

“I think probably not to rush it in the early stages. For me, I was able to take a bit longer because there wasn’t a lot of cricket on. I gave it that initial time to heal. When you have the surgery, they pack it full of new bone. They take a bone graft and pack it around there so you want it to bind together and one thing I tried to do was pretty much try and sit on the couch for 10 weeks.

“I was lucky enough I was speaking to Shane Bond and Corey Anderson from New Zealand who had it done not long before me, so he was really good to ring up and say I’m feeling this and I’m feeling that, is this normal is this not normal, and everything was sort of normal along the way that everyone else had experienced so that was a good feeling for me.”