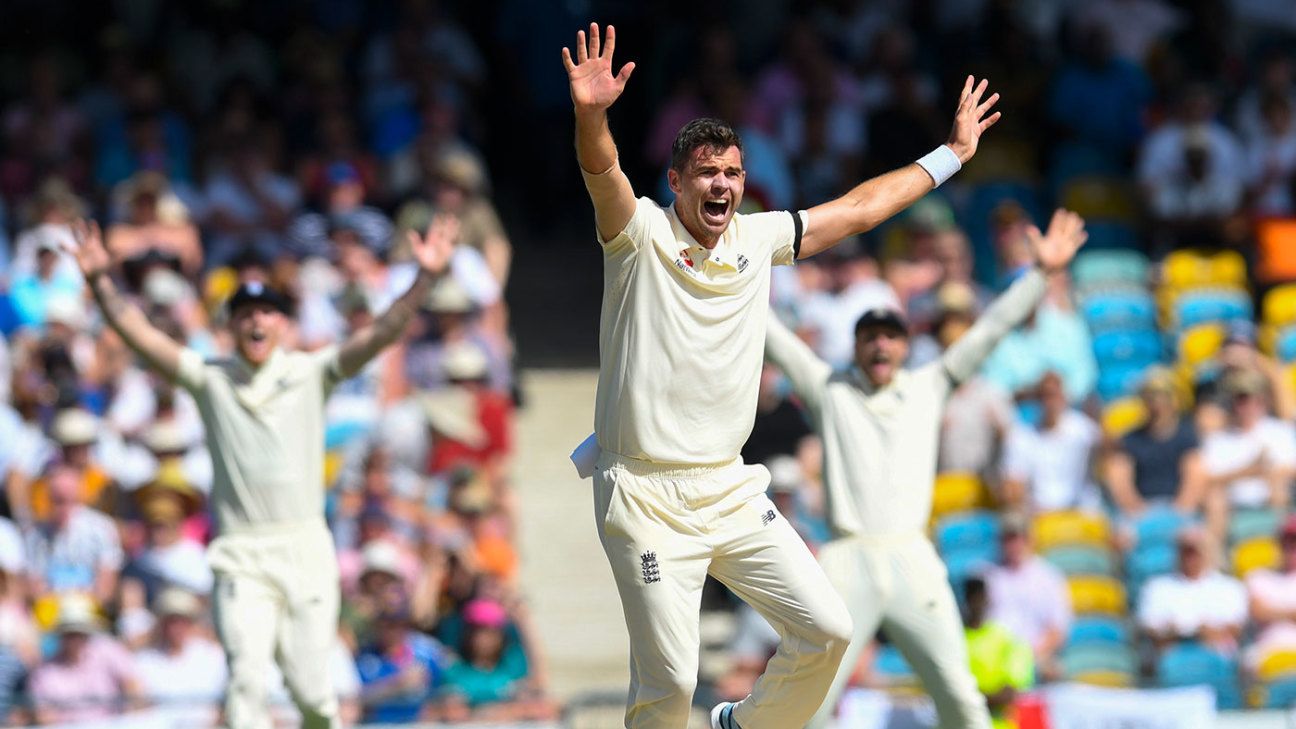 James Anderson admitted he was relieved to return to wicket-taking ways in the first Test in Barbados, but added that the tour of Sri Lanka before Christmas – in which he claimed a solitary wicket in England’s 3-0 series win – made him appreciate it all the more when conditions are even remotely in his favour.

Anderson produced a superb sustained performance with new ball and old on the first day against West Indies, conceding just 14 runs in his first 14 wicketless overs, before striking hard in his latter spells to finish with 4 for 33 in 24 overs all told, as West Indies slipped from 240 for 4 to 264 for 8 at the close.

In the process, he claimed his 200th wicket in overseas Tests, and also went past the combined tally of 1000 wickets with his long-term new-ball partner, Stuart Broad, who was not selected for this match as England opted for the allround option of Sam Curran.

“I’ve always enjoyed the challenge but it’s often been difficult for me to get to grips with conditions away from home,” Anderson said. “I guess it’s getting to know my game and getting my skills and confidence up. Now I feel I can bowl on most pitches – though you could probably take Sri Lanka out of that.

“Tours like that make you appreciate when there’s a bit of something for you. There was a it of swing even though the wicket was pretty flat. You’re always encouraged with that movement through the air. I say I’ve enjoyed it – I’ve not enjoyed the times I’ve bowled rubbish, but in recent years as I’ve improved overseas, I’ve really enjoyed that challenge.”

Of the 1000-wicket feat, Anderson said: “It makes you feel old. [Broad and I have] played for a long time together. I think it’s amazing to think we’ve taken that many wickets together. It’s a shame that he wasn’t out there today but hopefully he’ll get a go at some stage on this tour.”

The decision to leave out Broad – and his personal haul of 433 wickets – was one of the main talking points of the day, and Anderson said he completely understood why.

“Of course it causes conversation, it’s a massive decision. A guy who has played 124 Tests but then you have a really talented allrounder [in Curran]. In that respect it shows how strong our squad is. There will be difficult decisions as this team improves. I thought it was harsh on Jack Leach to miss out after Sri Lanka.

“It’s tough for Joe [Root, the captain] but that’s why he gets paid the big bucks. It’s Joe and Trevor [Bayliss]’s job. As players we just turn up and prepare to perform. We know there will be tough calls.”

England looked like ruing Broad’s absence in the early part of the day, as Curran in particular endured a tough time, conceding 54 runs in 12 wicketless overs. But with Ben Stokes chiming in with three wickets of his own, England finished the day with their noses fractionally in front.

“We really weren’t sure how [the wicket] was going to play,” he said. “It was scruffy-looking so it was difficult to tell what we were going to get. We thought it might have a little more pace in it. The odd ball kissed through nicely but on the whole it was a slow wicket.

“Kraigg Brathwaite left really well early on because we were getting some swing. So we’ve got to take a lift from how they played early on, because that new ball is tricky on there with the movement through the air. When we bat, that’s what we have to negate.”

“That last session with the second new ball got us right back in the game,” he added. “It was a good wicket to bat on today. There’s wasn’t too much off the wicket and it was a bit slow, but there was a bit of swing for most of the day.

“All in all, it was a day where we had to sit in and I thought we did that really well. We didn’t really let them get away from us at any stage and we know in cricket if you stay in the game, the second new ball can bring two or three wickets. We bowled really well with that second new ball and got our rewards.”