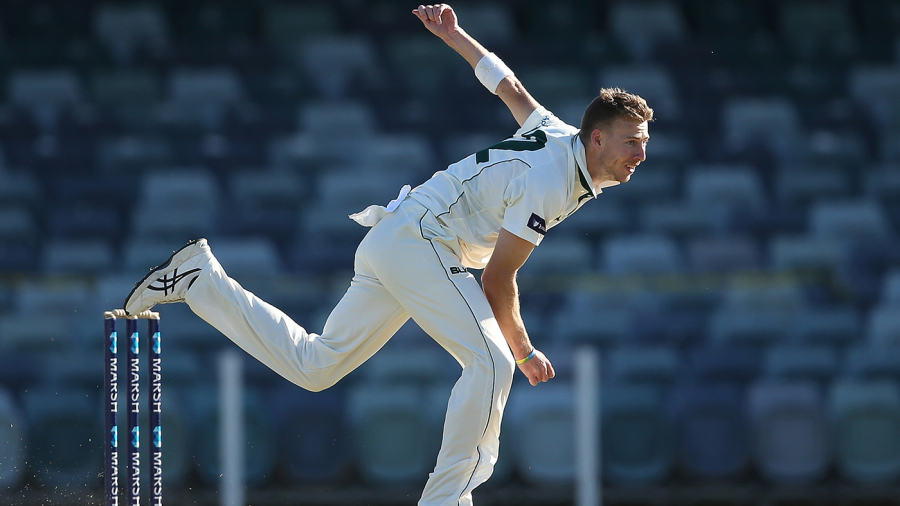 Victoria’s first day without Andrew McDonald didn’t go according to the outgoing coach’s plan, as they were rolled for a mere 127 after being sent in by Tasmania’s captain Matthew Wade on a green-tinged Hobart pitch.

While Meredith went for 53 from seven overs, his early incisions will interest the national selectors, not least for how Pucpvski was successfully targeted with the short ball and compelled to deflect to short leg a delivery that he failed to get over the top of.

Bird, Bell and Pyecroft prospered through more conventional means for swing and seam bowlers at Bellerive Oval, though Matt Short looked unhappy to be given out to a low catch behind by Jake Doran off Bird, seeming to suggest the ball had bounced before reaching the ‘keeper’s gloves.

Nic Maddinson was again a stand out for Victoria, scuttling along to 68 from just 69 balls as wickets fell around him. Wade, who is all set to retain the batting place he won in the Test side on the Ashes tour, was the backbone of the Tasmanian reply, fighting his way to an unbeaten 44 with help from the recalled George Bailey.

Victoria’s pacemen all delivered typically exacting spells alongside Jon Holland’s spin bowling, but a pivotal rush of wickets before the close was elusive, allowing Wade and Doran to reset on the second morning.