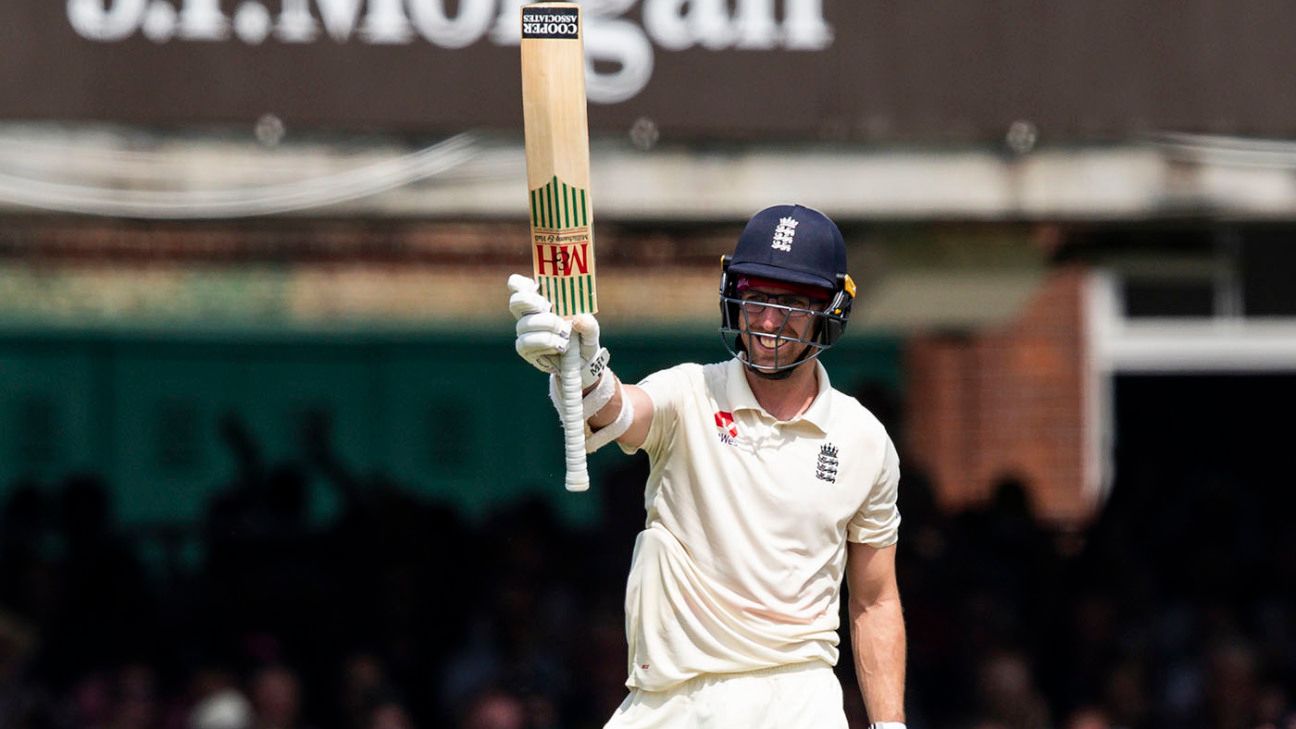 So surprising was Jack Leach‘s contribution at Lord’s that even his own father didn’t turn up to watch.

Simon Leach has never seen his son play for England. While he is a passionate supporter of Jack’s career, Simon has a fear of flying and this was Jack’s first home Test.

And, even though he had a ticket for the second day at Lord’s, he took a look at the weather forecast and reasoned it would be too hot to spend the day in the stands.

Had he known how the day would pan out, he would no doubt have wanted to be present. But with England expected to bat for most of the day and Jack’s role in that batting performance expected to be peripheral, Simon’s logic was understandable. Temperatures rose to the high 30s at Lord’s on Thursday afternoon making conditions uncomfortable for players and spectators.

You can’t blame Leach Sr for any apparent lack of faith in his son’s batting. Leach Jr went into this match averaging 4.66 in the Championship season – he has scored 42 runs in 12 innings for Somerset this year – and having not made double-figures in his last 18 first-class innings. His final three before this Test produced just one run in total. Nobody expected him to top-score or threaten to win a place on the Lord’s honours board.

“He was going to come today but he saw the weather forecast and said it was too hot,” Jack Leach said afterwards. “He doesn’t have Sky so I gave him my house key and he went over and he’s literally been at mine watching the whole time. I don’t think it would have been a good place for him to be today; he could have died. It was best he stayed at home in the cool. I’ll catch up with him later.”

Jack Leach was particularly satisfied with his innings as he received a significant blow while batting during the 2018 season. Having already lost his place in the England side having suffered a broken thumb the nets – Somerset teammate Dom Bess took his place in the England side, before Moeen Ali returned later in the summer – he sustained a fierce blow to the side of his head while batting against Surrey’s Morne Morkel in his comeback game and was forced out for another two weeks.

“It banged me on the side of the head and my glass lens came popping out,” he said. “It was concussion and I was out for a couple of weeks. And it came in my first game back after getting hit in the nets and breaking my thumb just before the Pakistan Test series.

“So, I had a couple of things with the bat. And it probably had a knock-on effect on my batting. It was a tough point. I work really hard on my batting but I’ve found it tough this year.”

For that reason, he was especially pleased to have come through a spell of hostile bowling from Boyd Rankin. At one stage Rankin, like Morkel an usually tall, strong man, bowled round the wicket with a short-leg and leg slip in the hope that the short ball would unsettle Leach. But while Leach fenced at one delivery – Gary Wilson spilt the chance – he generally stayed in line and played the ball bravely and securely from in front of his face. Notably, he played the short ball better than Moeen.

“It was nice to face Boyd Rankin, someone who gets a lot of bounce, and feel comfortable with that,” Leach said. “I guess that Morkel incident has had an impact but I’m starting to feel like that’s alright. I’ve worked hard on it and, slowly, I feel a lot more comfortable. That was last year and I’ve just got 92 in a Test match.”

At the start of Leach’s innings, he intended simply to “soak up some balls and make it easier for the guys coming in behind.” But somewhere along the way, “it went a little bit further than I would have thought it would.” Very soon, he was in new territory struggling to prevent his glasses from steaming up in the warm weather and experiencing, for the first time, the reality of the “nervous 90s.”

“They’re definitely a thing,” he said with a rueful smile. “I started thinking I was only two shots away [from a century]. I was telling myself not to think about it, but that made me think about it more. I’ll learn from that it I get another chance. It was hot, as well, and I was tired. I had cramp in my forearm and quad.

“I need to get better at keeping my glasses clear. But I didn’t think I’d be out there that long. I didn’t see that happening.”

Nobody did – including Simon. But Jack’s fortitude has given England a chance in a game that might otherwise have already slipped away from them. And with the pitch showing some signs of wear, Leach’s most decisive role in the game could still be in front of him.

“We believe we’ve a great chance,” he said. “It’s the first time Ireland have had this experience of probably being favourites to win the game. We’ve already talked in the dressing room about the game against India at Edgbaston last year where they were chasing 180 [actually 194] and came 30 [31] short. The boys believe this is a tougher wicket than that one so we’ll have big belief.

“I’m looking forward to bowling. I didn’t bowl well in the first innings. I felt nervous. It was the first time in front of a home crowd and a Lord’s full house. I hold my hand up, I didn’t get that right. But this innings has given me confidence and I’ll take that confidence into my bowling. There’s a bit of rough and the wicket’s wearing so I feel like I’ll have a part to play.”