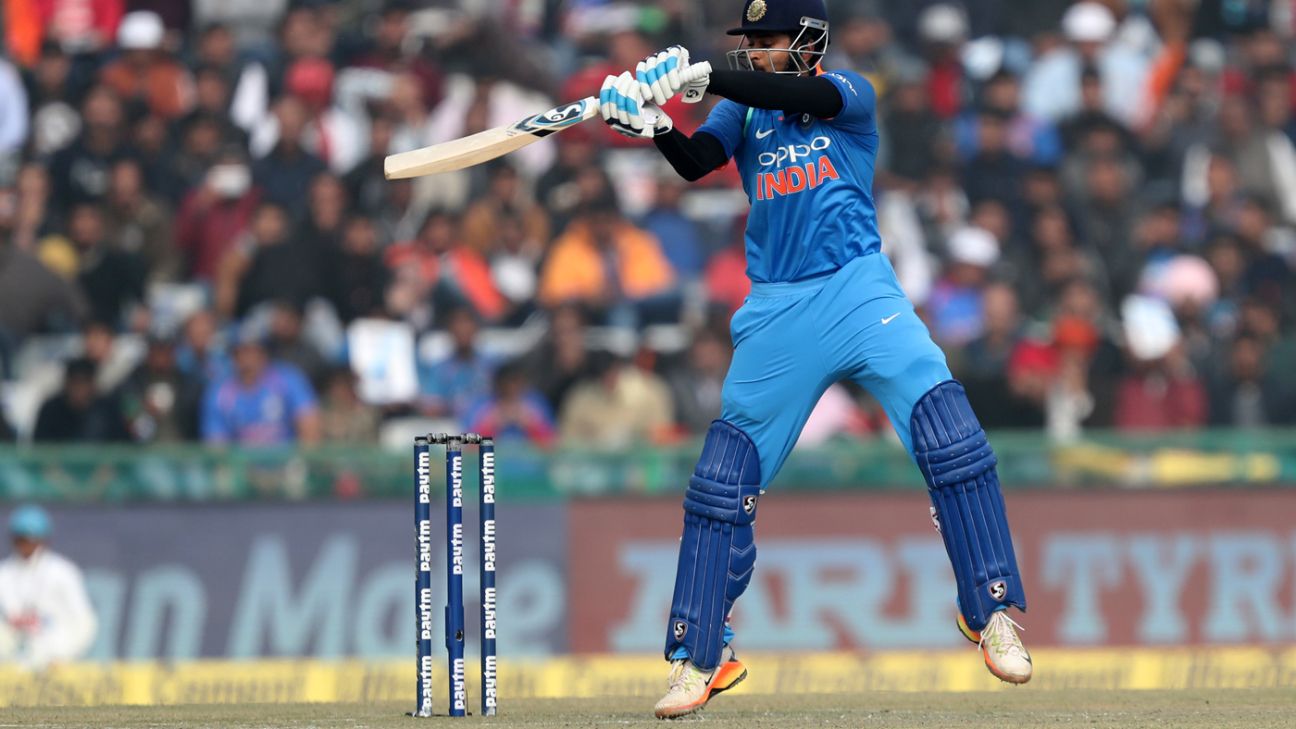 Shreyas Iyer continued his rich vein of form, smashing his second hundred in the Syed Mushtaq Ali Trophy 2018-19. Iyer now has scores of 147, 46 and 103* in the tournament to be the highest run-getter so far.

Iyer’s innings meant Mumbai beat Madhya Pradesh by eight wickets, getting to 145 for 2 in just 16 overs after being 7 for 2 in two overs.

Tushar Deshpande’s 4 for 28 had kept MP to 143 all out in 19.3 overs, and although Mumbai had an early wobble with openers Prithvi Shaw (off the first ball) and Ajinkya Rahane falling cheaply, Iyer took charge of the situation. He faced the majority of the strike during a 14-over partnership with Suryakumar Yadav, who played the supporting role with 39 off 36 in a stand that yielded 138 runs.

Iyer hit a whopping 10 sixes and five fours during his innings, scoring 80 of his runs with boundaries.

Manish Pandey walloped 111 not out off 46 balls as Karnataka smothered Arunachal Pradesh by 146 runs, the joint fourth-largest margin of victory (by runs) in a T20 match in India.

Pandey’s innings drove Karnataka to 226 for 4 after he had won the toss and chosen to bat, and Arunachal were then shot out for 80 in 14.4 overs, with Shreyas Gopal picking up 5 for 11 in 3.4 overs.

This was Pandey’s second hundred in the format, his only other one coming for RCB in IPL 2009 when he became the first Indian to hit a century in the Indian Premier League. For Shreyas, this was the first time he had taken a five-wicket haul in a T20 innings.

Karnataka had not started at a frenetic pace, and were 52 for 2 in 6.1 overs when Pandey walked in. He was into his stride immediately though, as the run-rate picked up. His half-century came off 25 balls, and the hundred was raised off 43 balls.

Arunachal might have gone down by a record margin were it not for opener Samarth Seth’s 49 off 35 – the next highest score was 6. Seth was run out in the 13th over by Shreyas, who picked up the next three wickets to finish up the innings and end with a five-for.

Ishan Kishan became only the second Indian player to hit back-to-back centuries in T20 cricket, leading Jharkhand to a 121-run win over Manipur with his innings of 113* off 62 balls.

Manipur chose to bowl first, and Jharkhand’s batsmen made them pay. Anand Singh and Kishan rocketed to a 54-run opening stand in just 4.3 overs before Manipur got their only wicket in the form of Anand, for a 12-ball 26.

Virat Singh came in and kept pace with Kishan, as Jharkhand continued to score briskly. Kishan raised a half-century in 35 balls, and Virat followed a little while later, getting to his own fifty in 34 balls. Kishan then stepped up a gear in the final stages of the innings, getting to a century in 54 balls. His knock had 12 fours and five sixes, and carried Jharkhand to 219 for 1.

Virat remained unbeaten on 73 off 46, with the partnership between the two worth 165 runs in 15.3 overs.

Manipur’s reply stuttered from the start, and save Yashpal Singh’s 40 off 31, there were no substantial contributions as they ended on 98 for 9 in 20 overs. Utkarsh Singh took 3 for 7 in three overs on Twenty20 debut, while Rahul Shukla, who had taken a five-wicket haul in the previous match, picked up 3 for 14 this time around.

Sandeep Warrier took a hat-trick in the final over as Kerala squeezed out an eight-run win against Andhra.

Choosing to bat first, Kerala made 160 for 6, driven by Vishnu Vinod’s 70 off 61 at the top of the order. Andhra recovered from 92 for 5 thanks to Prashanth Kumar’s 57 off 36, and were 152 for 7 at the start of the final over, when Warrier struck. Warrier had KV Sasikanth, Karn Sharma and SK Ismail out off the second, third and fourth balls of the over, ensuring Andhra’s innings ended.

Warrier took 3 for 27 in 3.4 overs to have the best figures for Kerala.