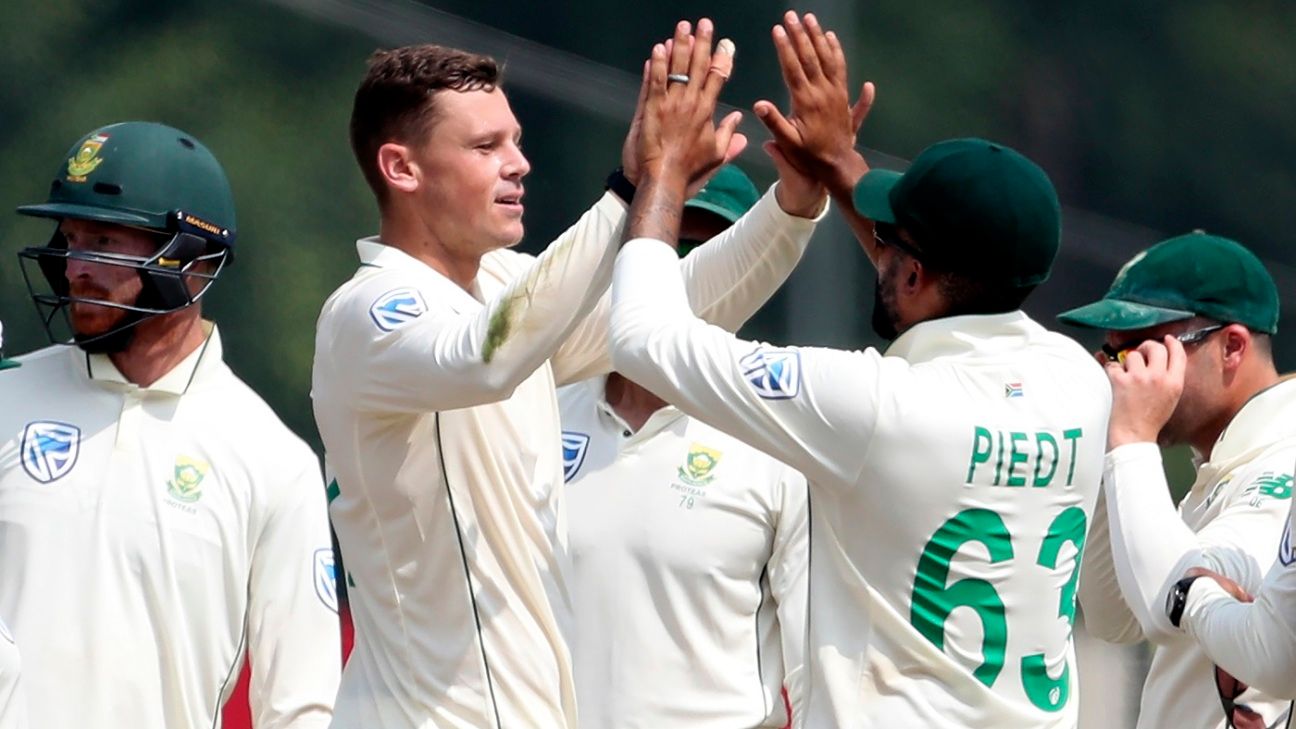 George Linde is a rookie who was dropped into a Test match in India like emergency rations, and in his first ever outing, he’s had to be South Africa’s lead spinner and deal with batsmen of the quality of Rohit Sharma, Virat Kohli and Cheteshwar Pujara. Not to mention a six-obsessed Umesh Yadav. How is that for a tough initiation?

Still come the end-of-day press conference, Linde – who replaced the injured Keshav Maharaj in Ranchi – was pinching himself to figure out if the whites he was wearing were all real.

“Yeah, it’s been lessons. I didn’t expect to play Test cricket, well in this series,” Linde said. “I obviously didn’t expect to come back to play the Test series. So when I got the call-up, I was quite nervous but luckily I had a few days to just settle and then today a few lessons to learn, especially there at the end. But if you’d told me I’ll take four wickets on my debut, I’ll take it any time of the year.”

The 27-year old left-armer finished with 4 for 139 from 31 overs, figures that took a beating as India searched for quick runs towards the end of the second day’s play in Ranchi. But Linde was happy to take it because not too long ago, he was back home in South Africa. He had been with the squad during the T20Is as well and had been part of the A team that had visited India in August to get a measure of the conditions but Maharaj has been the team’s lead spinner in red-ball cricket and Linde has had to wait a long time to get his chance.

He didn’t start well though. “Before the Test, we did say don’t get it on the legs, which I did a few times yesterday,” Linde said. “It’s not easy to bowl here. Have to bowl a bit straighter line, especially to their batsmen. In South Africa you can bowl a bit wider because there’s more bounce but here…”

Linde understood he was in trouble and went to the South African backroom staff to sort it out. “Last night I was in [South Africa video analyst] Prasanna’s room and we just went over a few clips just to see what I can do better, where I can improve. Also me and Faf [du Plessis] chatted at the end of the day about me getting just a bit closer to the wicket [at the point of delivery] and just trying to bowl middle and off [line]. You don’t really want to get on the legs because they’re very good on their legs. So today I tried to be on off stump, challenging their inside and outside edge.”

Taking the advice he received on board, Linde proved to be South Africa’s best bowler, responsible for four of the seven Indian wickets that fell on the second day in Ranchi. He used turn and bounce to have Ajinkya Rahane caught behind and conversely the straighter ball to trap Wriddhiman Saha. He even created a chance to get rid of Rohit Sharma in his very first over of Test cricket, but the fielder at short leg, Zubayr Hamza, dropped a very difficult catch.

“You know those catches, they stick or they don’t Unfortunately it wasn’t our day. It was Rohit’s. He played well so, well done to him.”

South Africa gave away 497 runs after being on the field for more than 100 overs again and that weariness affected their opening batsman. Both Dean Elgar and Quinton de Kock were bounced out after which rapidly fading light put an early end to play with the score 9 for 2.

“Bad start,” Linde said, “Not the way we wanted it to go but tomorrow is another day. We need to be positive, the guys are smiling in the changing room. So we are ready for tomorrow.”